Today the Garage Museum has announced its plans for the next five years, and the main news is the opening of a new building reconstructed according to the project of the SANAA bureau of the Hexagon pavilion. We tell you everything that is known about the architectural project at the moment, and show the first renderings. 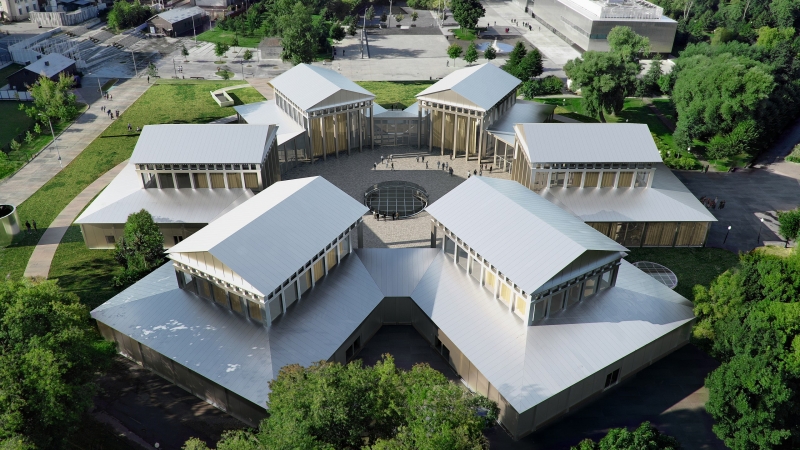 In 2021, the Garage Museum turned 13 years old. Its history began in an architectural monument — the Bakhmetyevsky garage designed by Konstantin Melnikov. Since then, Garage has not stopped exploring the possibilities of architecture in an urban environment. After that, a temporary pavilion of Shigeru Ban appeared, which grew up in Gorky Park in 2021. Garage invited Ban as a master of «temporary architecture» to build a space for exhibitions during the reconstruction of the main building in the former Vremena Goda restaurant. Shigeru Ban created a pavilion made of cardboard structures, perfectly integrating it into the environment. 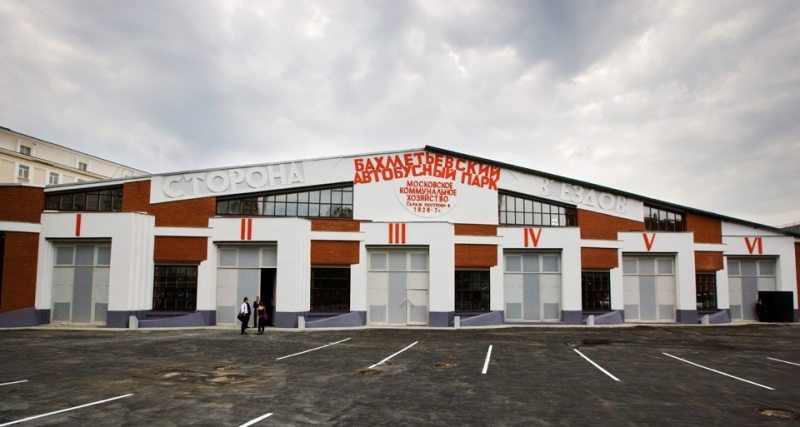 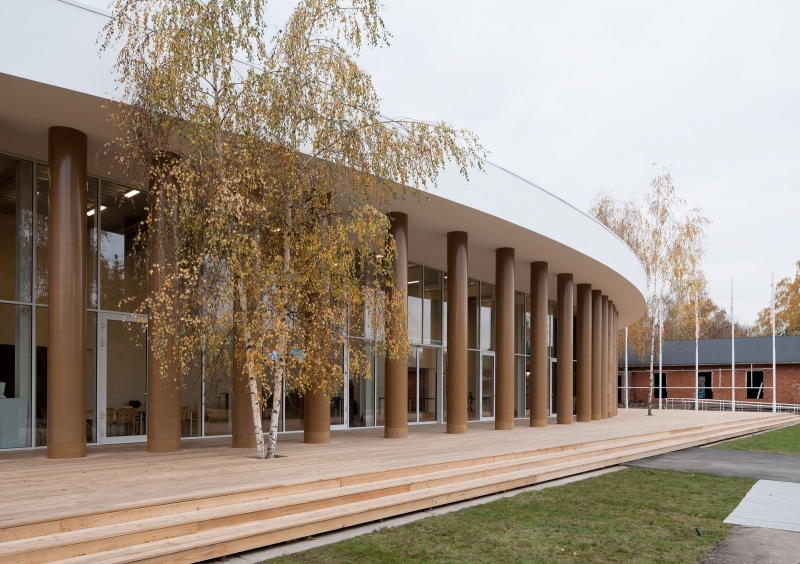 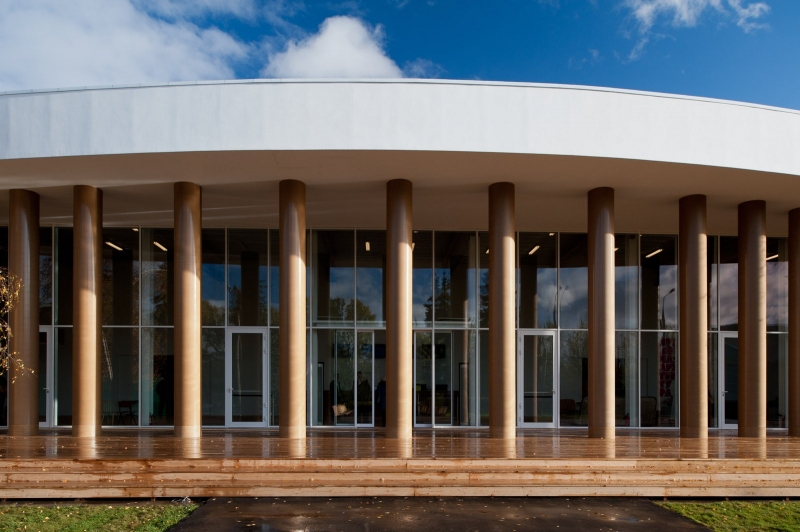 The main building of the Garage is located in the former Vremena Goda restaurant, and the architectural project was entrusted to Rem Koolhaas and his architectural bureau OMA. Koolhaas carefully treated the architectural heritage and preserved Soviet mosaics, tiles and bricks in the building, and «wrapped» the existing concrete structure in a translucent polycarbonate shell, literally dissolving the building in the surrounding park. 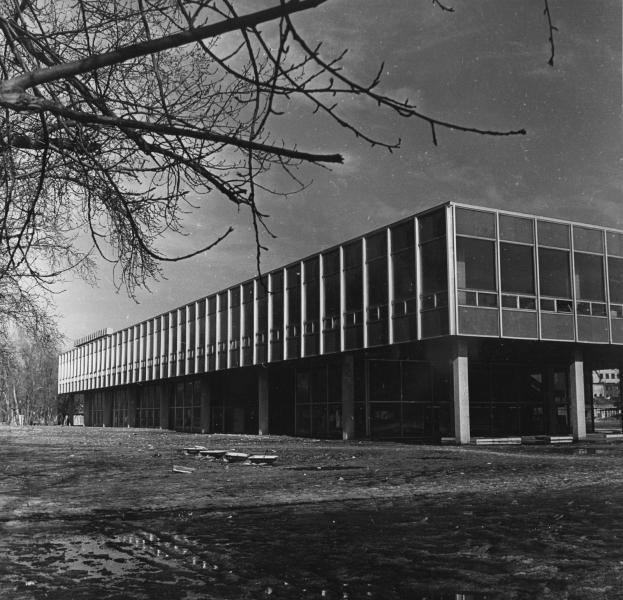 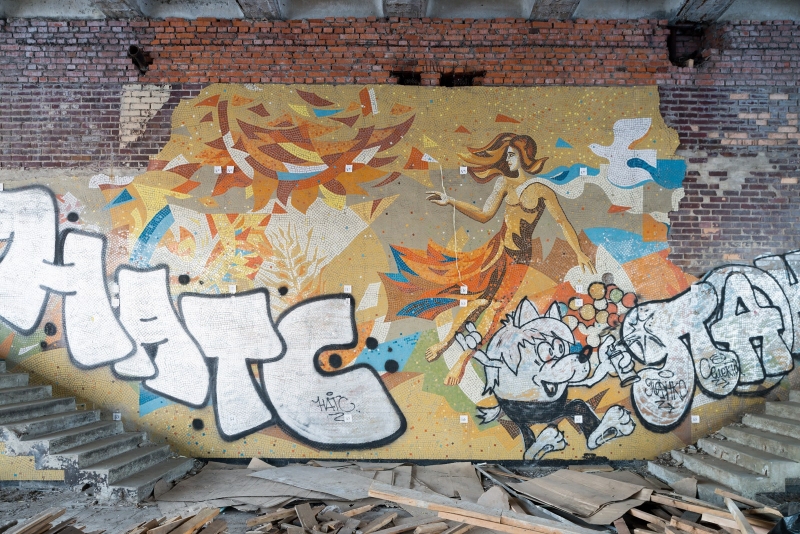 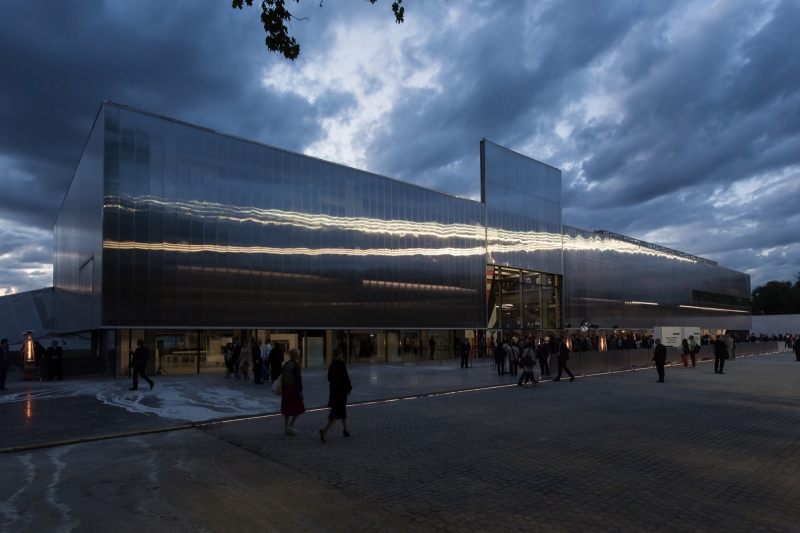 «The Garage Museum has never existed in new or purpose-built spaces. The Bakhmetyev Garage, the former Vremena Goda restaurant, the Shigeru Ban pavilion, built from temporary materials and inspired by the temporary architecture of Gorky Park— are all examples of how the museum consistently not only preserves, but also saturates with modern energy and new meanings fragments of the virtually lost urban infrastructure. All buildings, starting with the Melnikovsky garage, imply serious work on understanding condom strategies, and by inviting world architectural bureaus, we are confident in their sensitivity to old buildings and the local context”“ says Anton Belov, director of the Garage, commenting on the museum’s connection with architecture.

The next stage in the expansion of the museum’s borders was the ruined pavilion «Machines and Tools“, or ”Hexagon», which had been in disrepair for decades. The project of reconstruction of the building went to the Pritzker laureates of 2010 to the Japanese bureau SANAA. 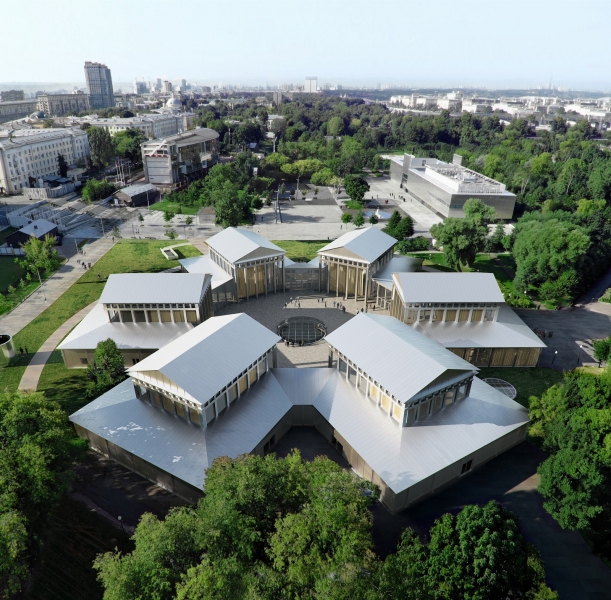 «SANAA, together with the Garage, are restarting and returning to Moscow not just the physical space of the former pavilion “Machines and Tools” (later — “Hexagon”), but also actually rethinking what a modern museum can be today. The desire for organic presence, commitment to the principles of responsible consumption, the creation of an accessible environment largely dictated the choice of architects”» says Anton Belov.

About the Hexagon Pavilion

The Hexagon Pavilion, or rather what was left of it, you could see on the left hand at the entrance to Gorky Park from the side. This building was built according to the project of the Soviet architect Ivan Zholtovsky with the participation of architects V. D. Kokorin and M. P. Parashnikov for the 1st All-Russian Agricultural and Handicraft Industrial Exhibition and is the only object from this exhibition that has survived to this day. 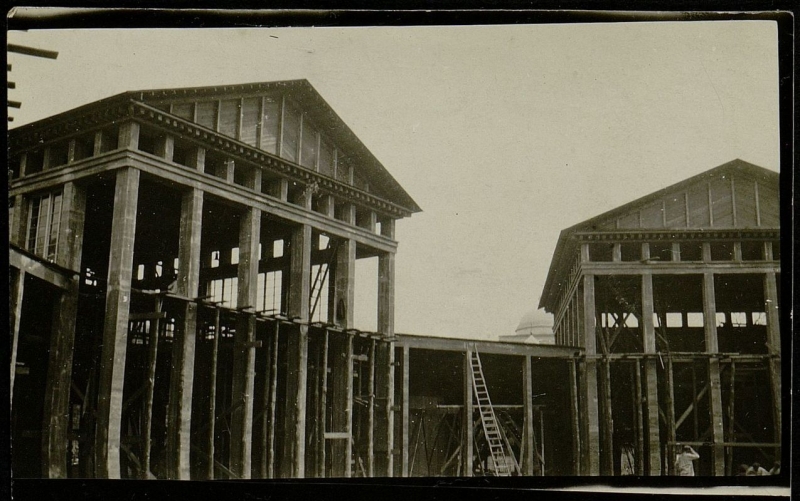 Zholtovsky’s architectural idea here somehow echoes the principles of Shigeru Ban: the Soviet architect also treated this pavilion as an object of «temporary» architecture, since it was built for a specific event. Therefore, Zholtovsky allowed the use of new materials here, as well as the openness of structures. Nevertheless, this is the only pavilion built of reinforced concrete, which played a key role in the preservation of the building — the rest of the buildings were made of wood and have not been preserved.

In terms of the pavilion looks like a big gear consisting of six buildings united by one courtyard. Each building had a two-light central part and lower one-story side wings, which, combining with each other, formed a gallery encircling the entire pavilion. 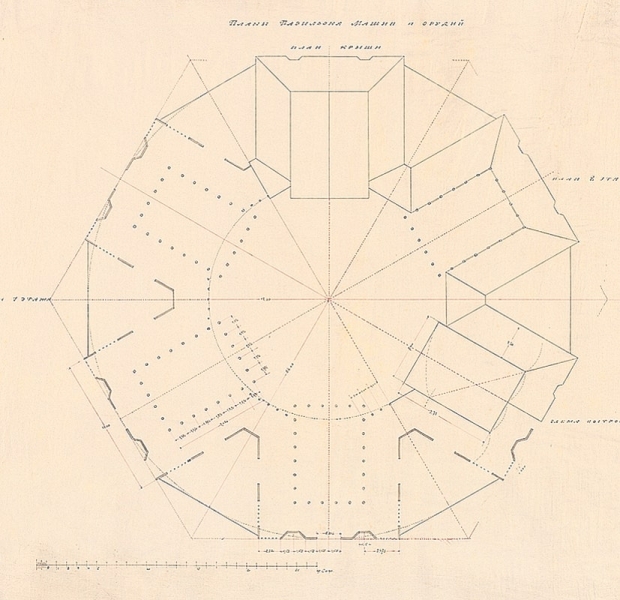 Ivan Zholtovsky. The project of the pavilion «Machines and tools». Plan. 1923. Archive of the Garage Museum of Modern Art, collection of A.V. Shchusev.

Alexey Shchusev, the chief architect of the VSHV, wrote about Zholtovsky’s work in the article “Construction of the exhibition”: «One of the difficult tasks of construction was the extensive (3500 cubic fathoms) reinforced concrete pavilion “Mechanical Engineering» (Zholtovsky’s project, production of works — N. V. Andreev). Standing on a swamp with a low level of soil water, it was built in a month and a half. Interesting in architecture, majestic in proportions was the courtyard with a beautiful painting by Nivinsky and Exter”» 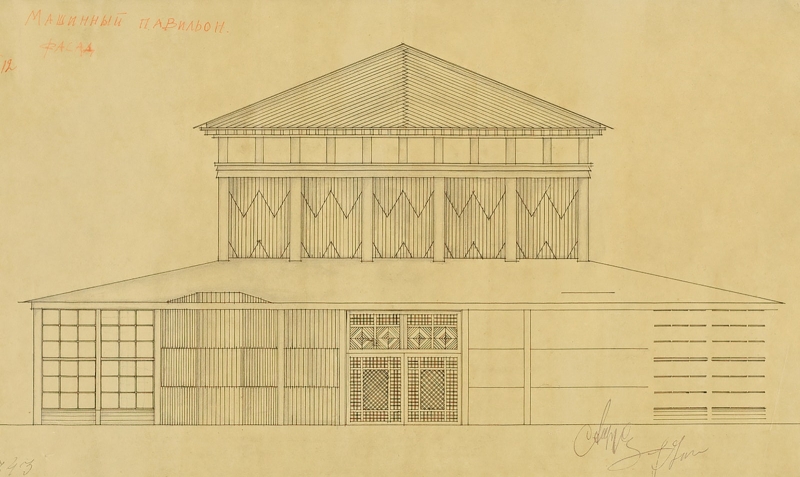 Ivan Zholtovsky, Mikhail Parashnikov. Working draft of the pavilion «Machines and tools». A fragment of the facade showing wooden paneling. Option. 1923. Archive of the Garage Museum of Modern Art, collection of A.V. Shchusev.

In 1928, it was decided to create a Park of Culture and Recreation on the site of the agricultural exhibition, and turn the pavilion into the main dining room. From that moment on, the appearance of the complex of buildings began to change: three of the six buildings were separated from the courtyard by light walls, and two of them were equipped with kitchens. 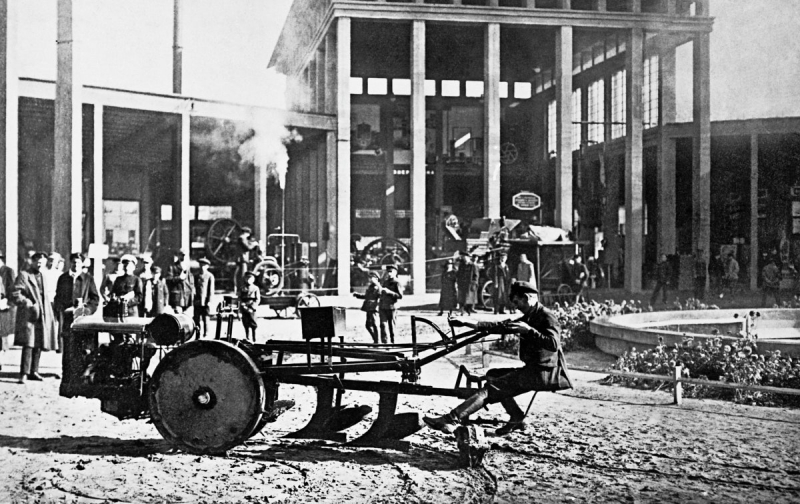 At first, the dining room, like the park, functioned only in the summer, but in the 1930s, when winter attractions opened in the park, the building was rebuilt again, adding brick walls to it and warming it for all-season work. In 1935, the pavilion received the name «Hexagon», which has been strengthened behind it to our time. 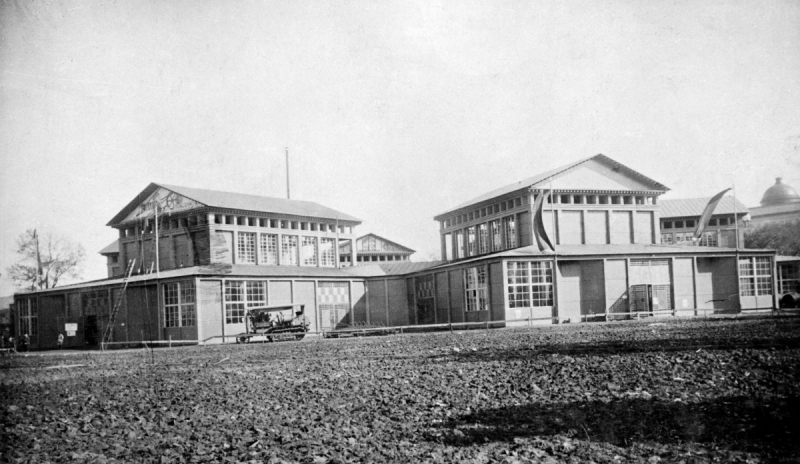 Connoisseurs of Soviet cinema may remember the dance floor of the “Hexagon» from one of the episodes of the film «I’m walking in Moscow». This dance floor appeared in the pavilion already in the 1950s and became a popular place among Moscow youth. In the 1970s and 1980s, the pavilion was badly damaged by fires, and soon it was completely abandoned. In such a ruined state, it came into the possession of the Garage Museum.

From here begins a new history of the pavilion, which is being reconstructed by the Japanese bureau SANAA, founded by Pritzker laureates Kazue Sejima and Ryue Nishizawa. The bureau’s portfolio includes a huge number of public spaces, including the New Museum in New York, the Louvre Lense Gallery, the Rolex educational center, the Serpentine summer pavilion and other projects united by the common architectural principles of Japanese architects, which they transferred to their new project — the Hexagon Pavilion. 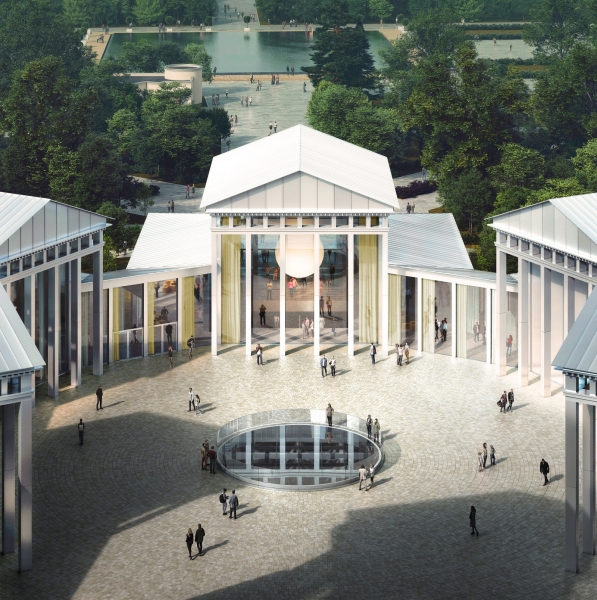 “The offer to undertake this project immediately seemed very interesting to us, since the Zholtovsky pavilion is unique for Moscow. We were impressed by the condition of the building, its openness to the environment. And most of all here we are inspired by the work on preserving the monumental geometry of the building, its scales and proportions and rethinking them in a modern way”» the architects of the SANAA bureau comment on this project for AD. 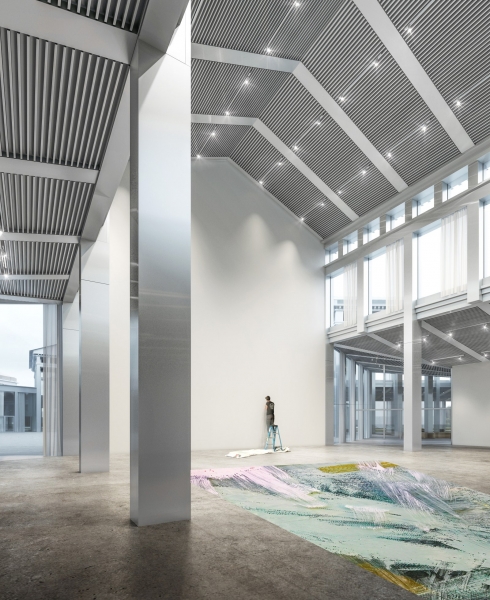 First of all, the architects took care of preserving the architectural code of the building and the original idea of its author Ivan Zholtovsky. SANAA will preserve the proportions of the buildings, reopen the spaces to the courtyard and let daylight into the interiors. The common courtyard, which the buildings form, will regain its former function of a public space in the open air. Each building of the ”Hexagon» will be decorated with neoclassical six-column porticos from the original project of Zholtovsky, and all late details of the decor will be eliminated. 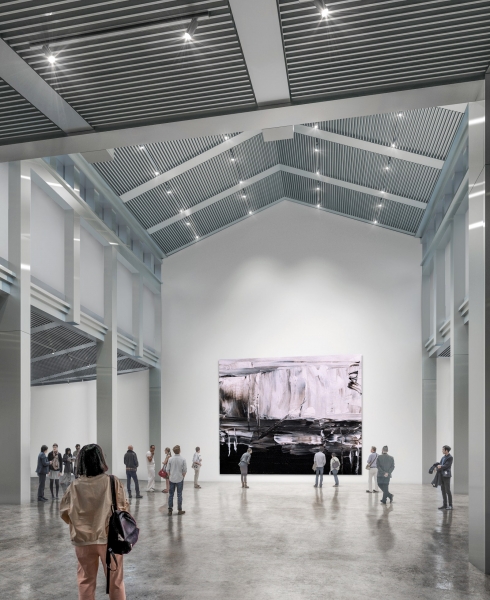 The main elements of SANAA’s handwriting are transparency and lightness of designs, thanks to which all their projects literally dissolve in the environment. According to the architects, it will be the same here: “The transparency of the design will allow various types of cultural activities in the courtyard and pavilions to go outside the building, inviting visitors to the park to take part in the activities of the museum.” 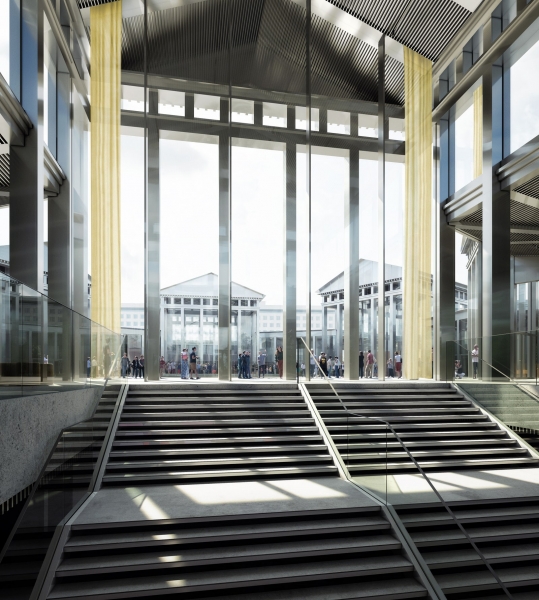 When asked what SANAA likes most about this project, they answer“ «The use of aluminum is our favorite aspect of this project. Aluminum, due to its visual qualities, allows you to maintain a delicate balance in a building that should be both classical as a tribute to architectural heritage and modern. In addition, this material gently reflects the environment, which will allow the pavilion to literally merge with the park”» 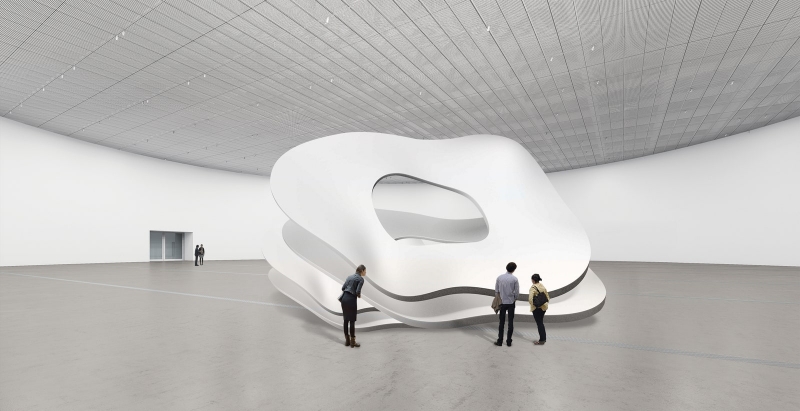 After the restoration, the architectural monument will acquire new functions. The Hexagon will house three exhibition spaces, one of them on the new underground level, as well as a library, a bookstore and a cafe. The total functional area will be 9500 m2. 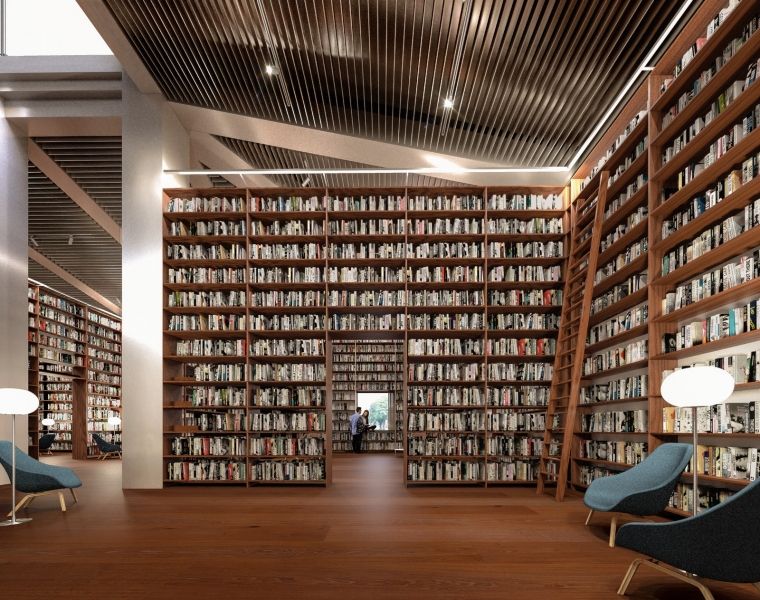 Together, the spaces of the “Seasons” and “Hexagon» pavilions will create new opportunities for the exposition of various artistic practices, interdisciplinary projects and performances, and AD will continue to monitor developments.

«The Weary Goddess»: the first book about architect Lin Bo Bardi has been published

Inspiration for the Week: 10 pools that actually exist