The improvement of the Pavshinskaya floodplain has been going on for the sixth year. We tell you what appeared here as part of the third stage. 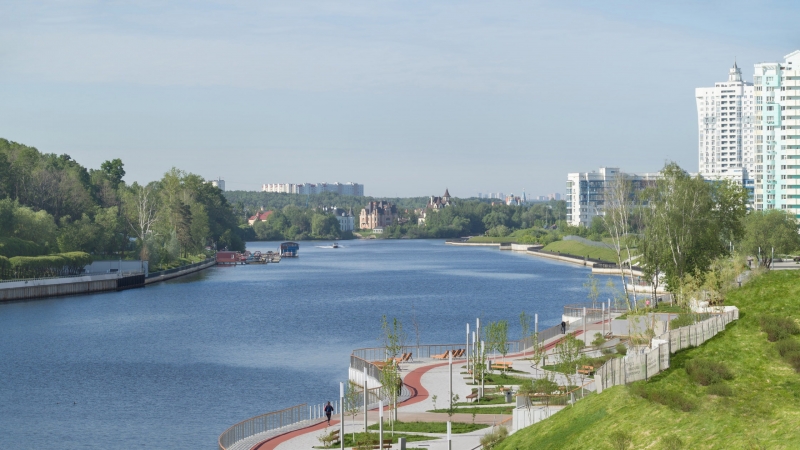 A year ago we wrote about the results of the first stage of improvement of the Pavshinskaya floodplain. The second and third have already been completed. During this time, an amphitheater, picnic areas, many mature trees, a lower embankment and several functional zones have appeared here. 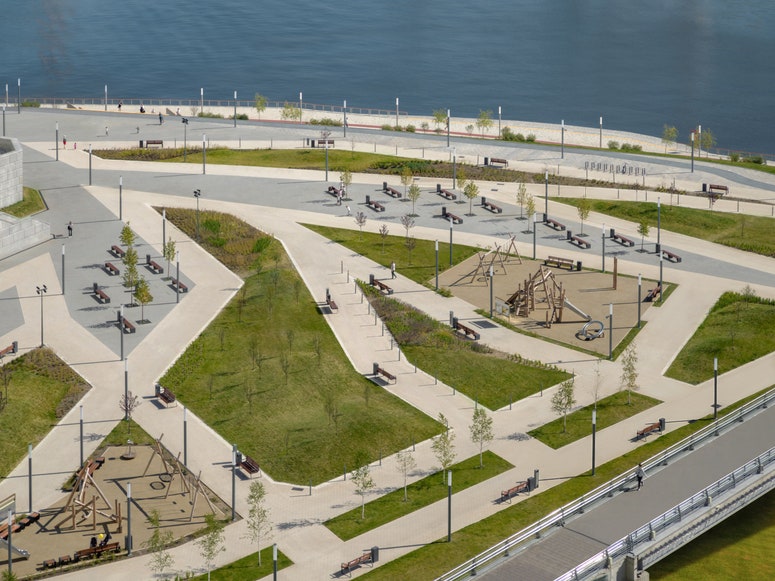 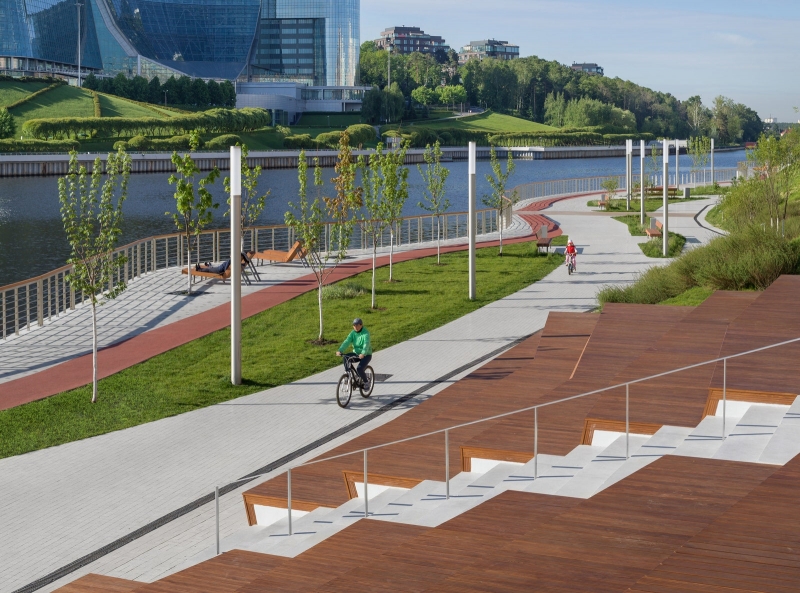 Work on this project began long before 2020: the architects of the Basis bureau held public hearings with local residents, met with activists after work, presenting them with a conceptual vision for each proposal, and made edits taking into account their wishes. 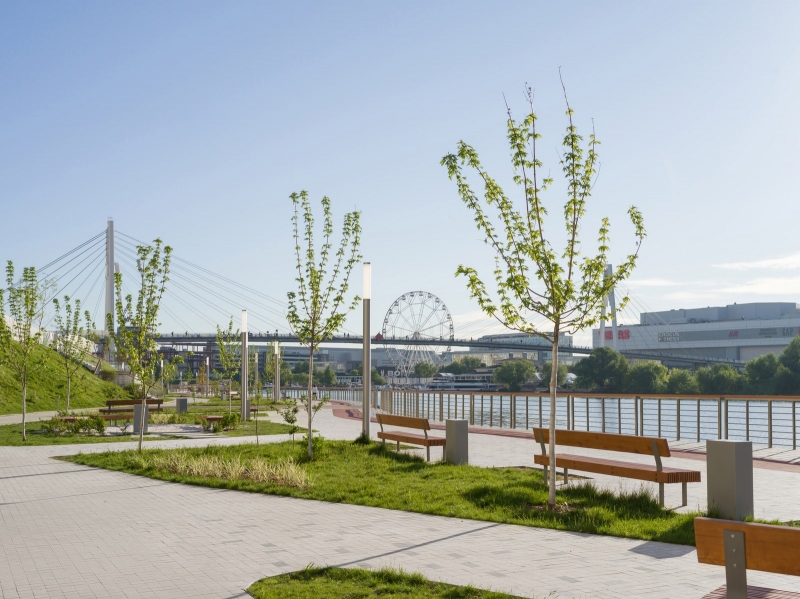 The project cannot be called simple. Firstly, the site is located near the metro station, which is used by the whole city, which is why there is always a lot of traffic here. Secondly, the territory is a kind of “buffer zone” between dense residential buildings without courtyards and a giant trade and exhibition complex located on the opposite side of the river. Therefore, the task was to make the space convenient for everyone: for residents of nearby houses who did not have enough space for walking, for those who come here to relax from other areas, and for those who just hurry to the subway. 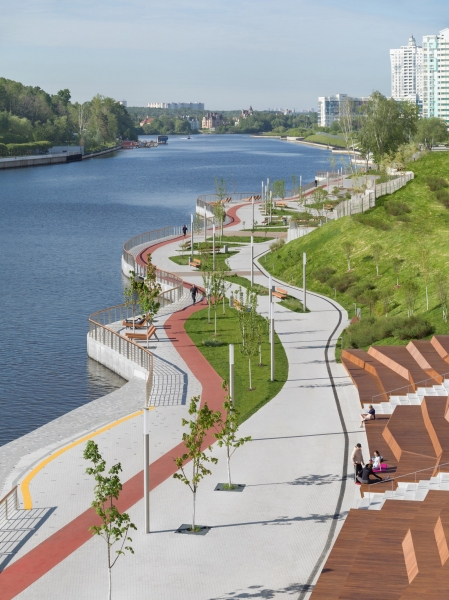 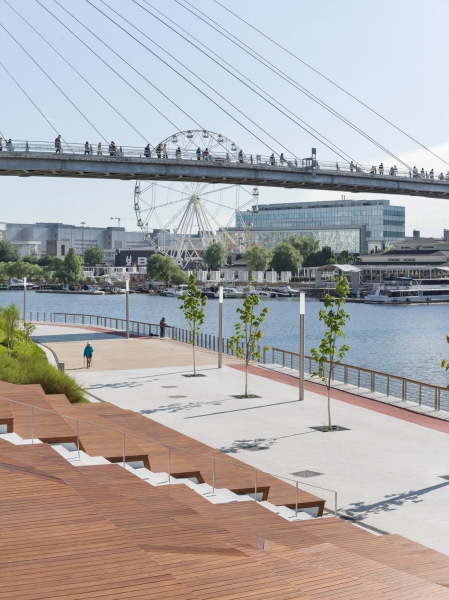 The architects of Basis tried to separate the streams of people with different interests so as not to create pandemonium. At the same time, we designed universal elements that all groups can use if desired. 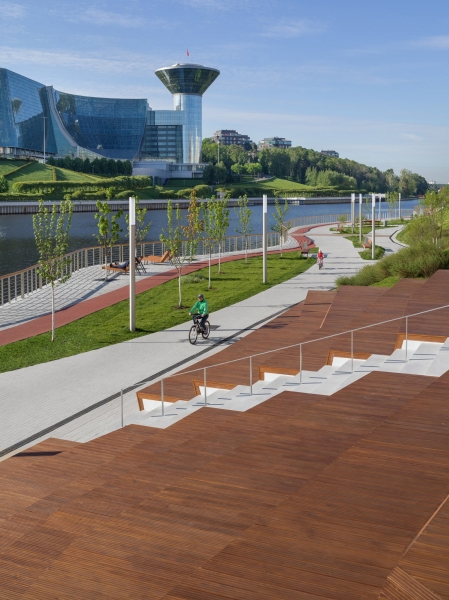 For example, the amphitheater has ergonomic backs with a different slope, thanks to which you can comfortably sit and recline, as on a chaise longue. Residents of the houses can go down and work with a laptop, sunbathe, do yoga, and those who come for a walk can listen to an evening concert, meet friends or just relax by the water. 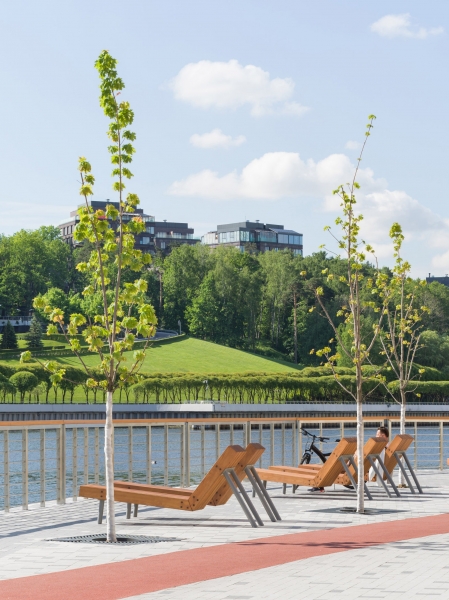 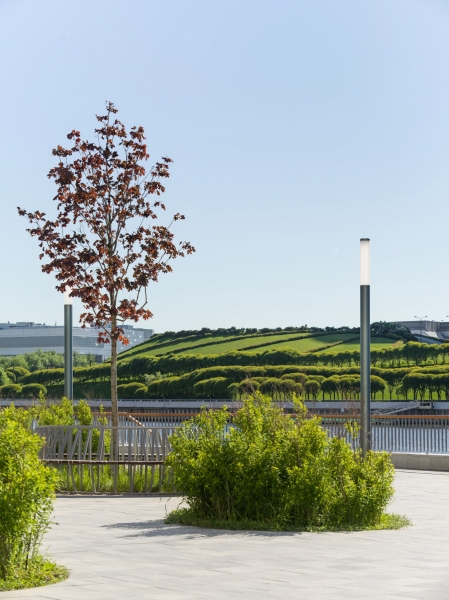 The embankment is also designed to distribute flows. Wide zones alternate with narrow ones. Large areas are occupied by green spaces: benches under old willows, deck chairs with new trees, picnic areas by the water, an amphitheater. And the narrow zones are transit, there are only running and pedestrian paths with lighting. 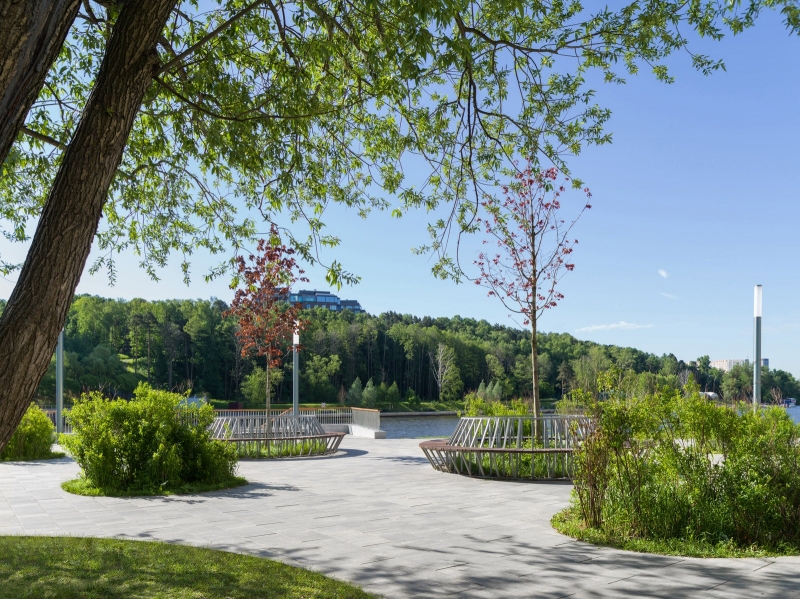 “The effect of getting through the corridor into a new room was created. In addition to visual diversity, such transit barriers make it possible to avoid hyper-saturation of space and make the epicenters of attraction not very crowded. Without alternating zones, the embankment between two urbanized “clusters” could become oversaturated with people and functions, and it would be uncomfortable to be here. We have separated pedestrian flows by making the upper and lower embankments, which are easy to get to with the help of an extensive system of paths,” says Ivan Okhapkin, head of the Basis bureau. 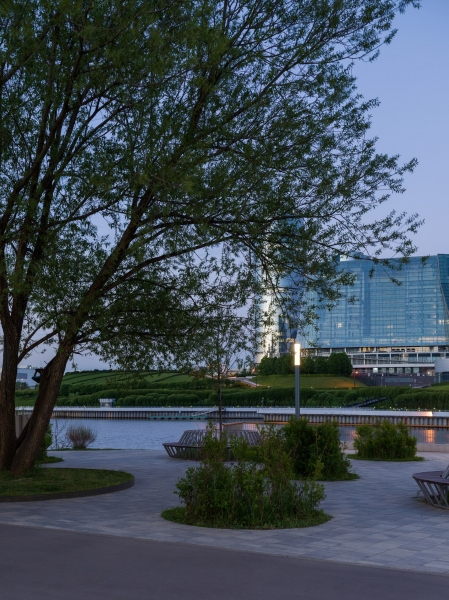 The territory of the Pavshinskaya floodplain managed to be kept green: the architects left healthy adult trees in their former places, but also planted new moisture-loving maples and willows, which will soon give shade. 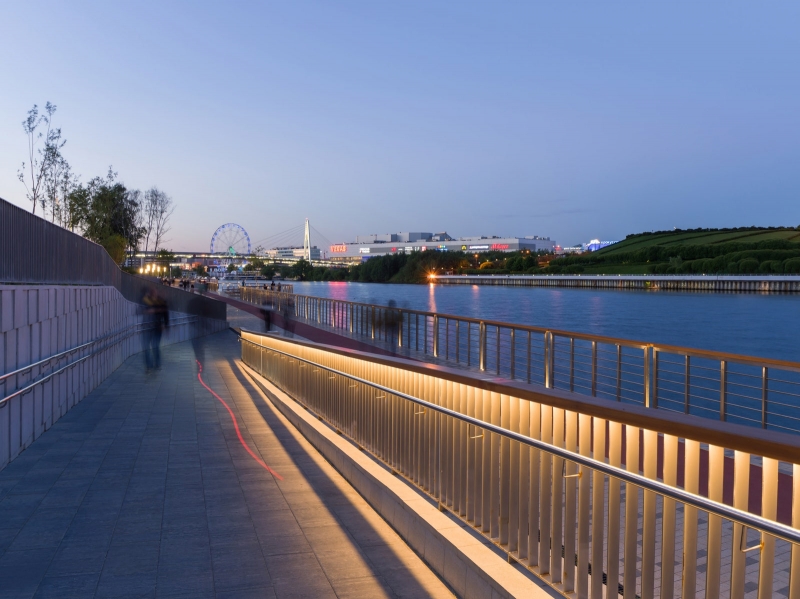 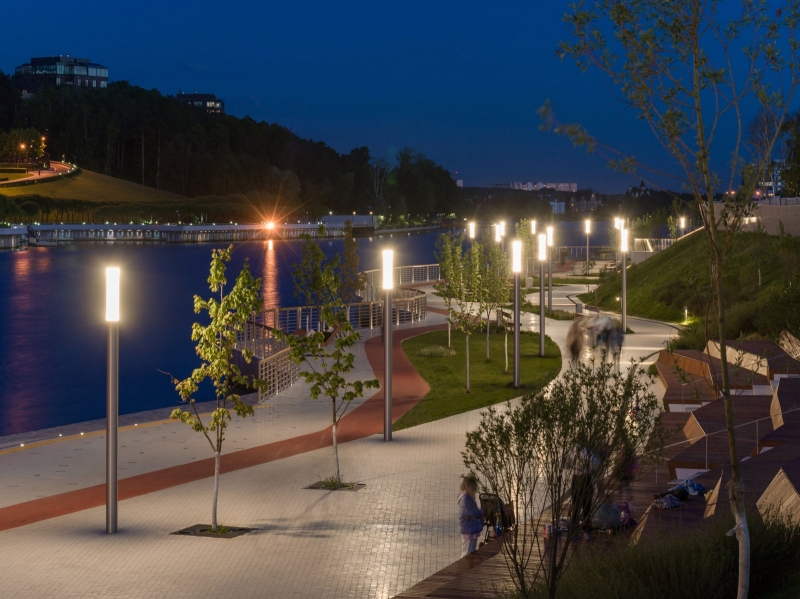 This green oasis in the middle of an urban landscape is subordinated to nature — the paving pattern is inspired by the gradient of the river, smoothly transitioning from darker tones near the water to lighter ones near the shore. The dot ripples on the coating repeat the ripples on the water. In addition, arch-concrete with a geometric pattern was used on the preserved retaining walls, emphasizing the play of light and shadow. 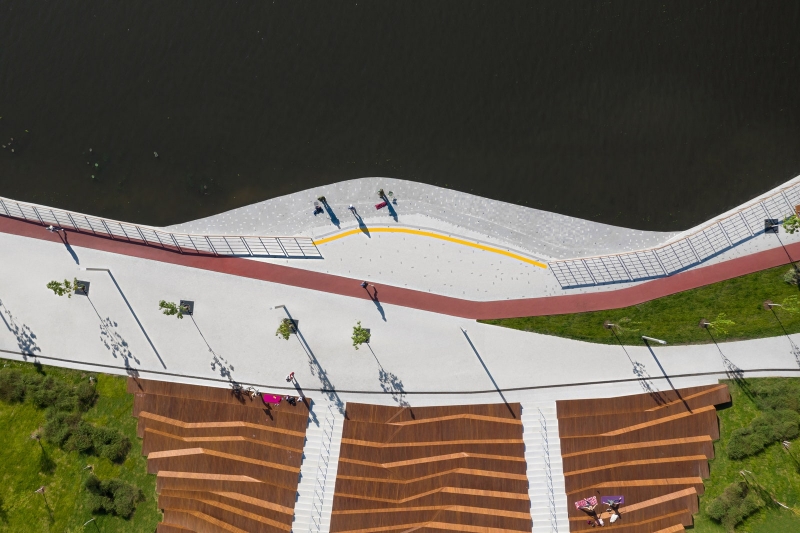 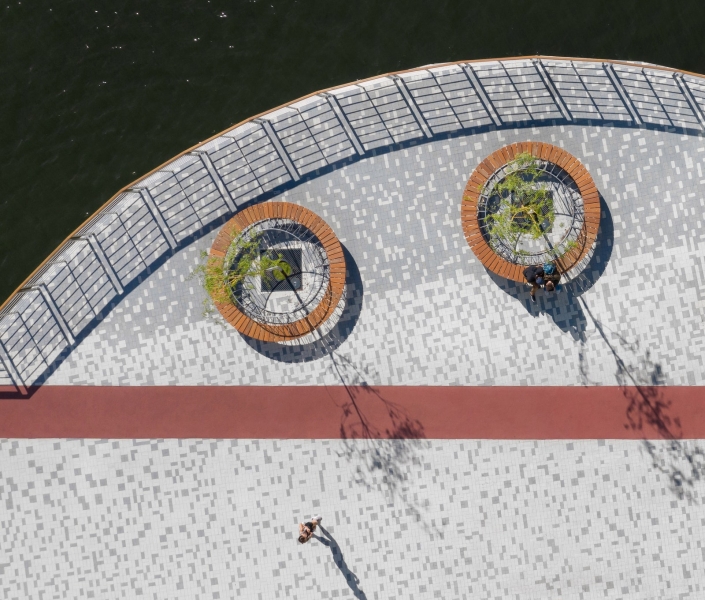 The third stage also affected the “quiet zone” — the territory, which is a heavily drained well between multi-storey buildings. Responding to the challenge, the bureau has developed pergolas in the form of honeycombs with swings, the main function of which is to break the wind, protect from the sun and precipitation. In addition, the architects chose the landscaping correctly: a large number of pyramidal poplars were planted along the perimeter of the courtyard, protecting from wind and noise. 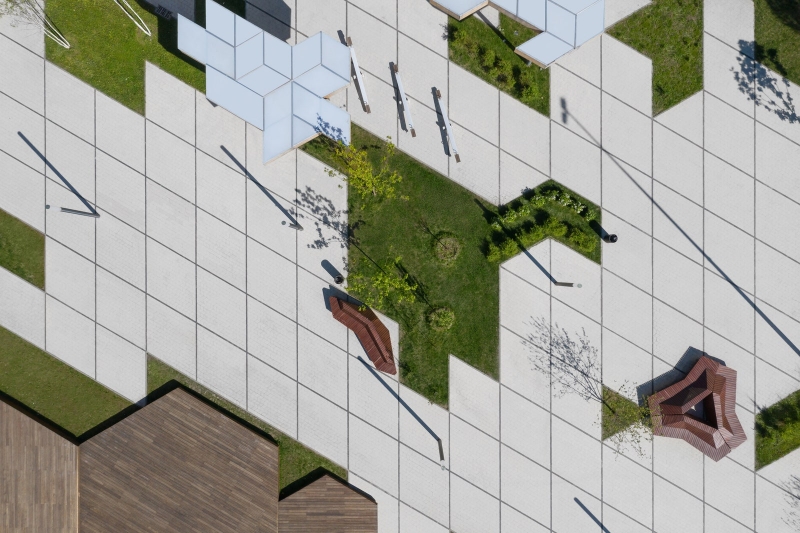 Club hotel on the lake in China

Extension to a house in the Czech Republic