OMA architects have completed the construction of the Audrey Irmas Pavilion in Los Angeles. This is the first religious building in the bureau’s portfolio. 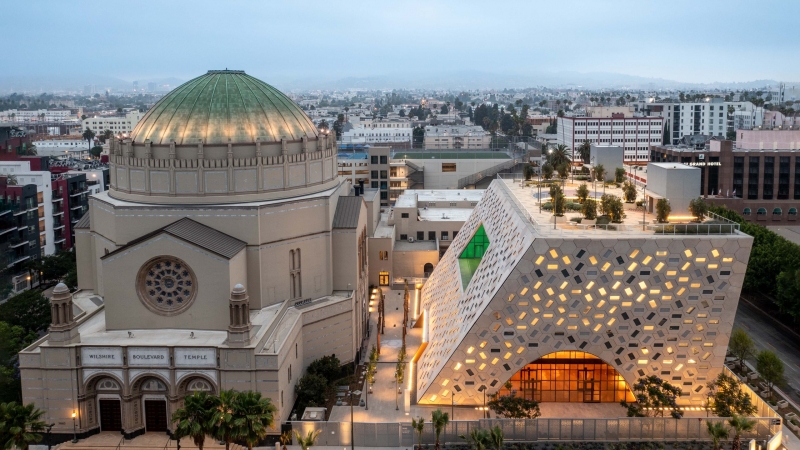 After more than ten years of efforts and efforts, the pavilion of the Jewish temple still appeared on Wilshire Boulevard. Its construction began in 2015, when the OMA bureau won the competition with the project of a monolithic building with a perforated facade. 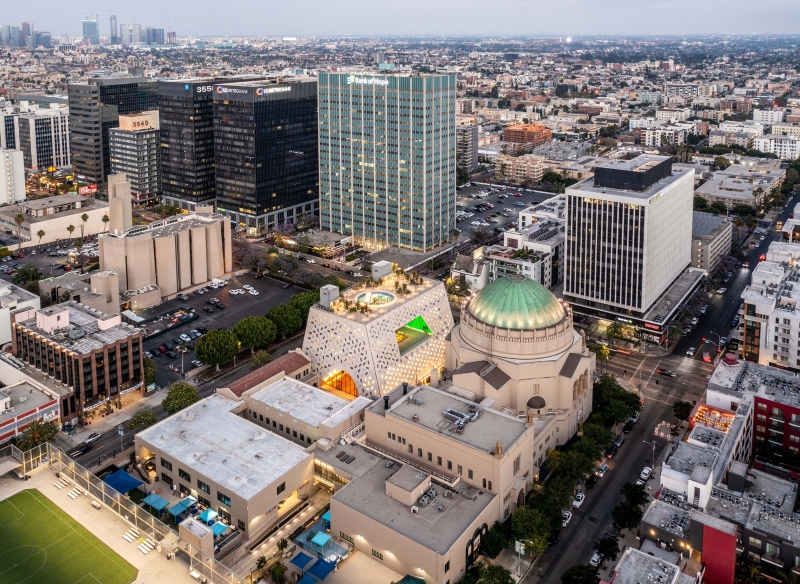 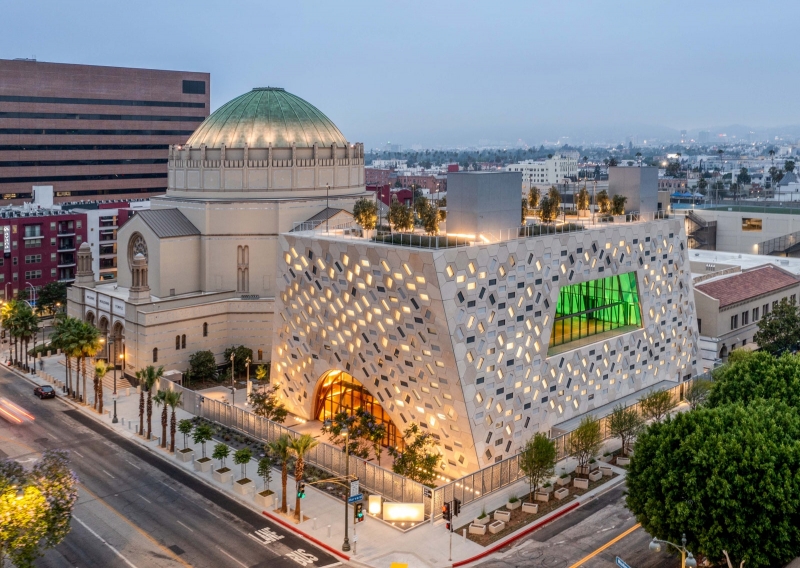 The structure is an addition to the temple of the oldest Jewish community in Los Angeles and will serve as a place for large-scale meetings. The pavilion was named after Audrey Irmas, the leader of the committee that initiated the construction of the building, as well as the main sponsor of the project. Audrey donated $30 million, and her contribution was the largest single donation to the temple in the history of the United States. 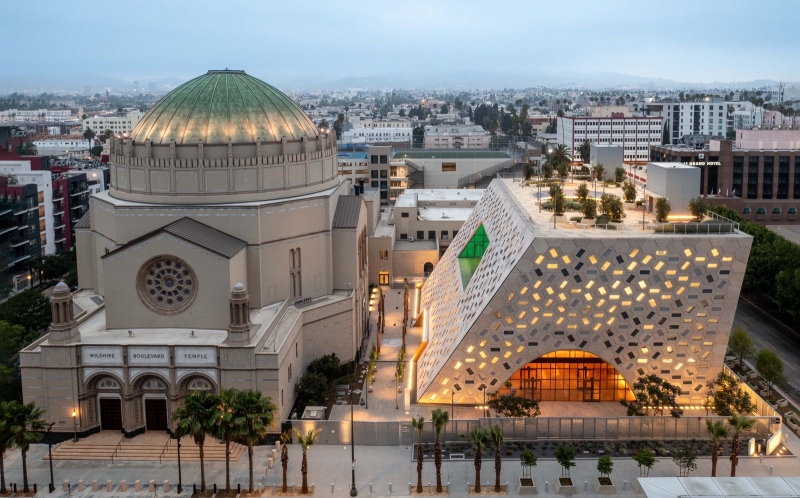 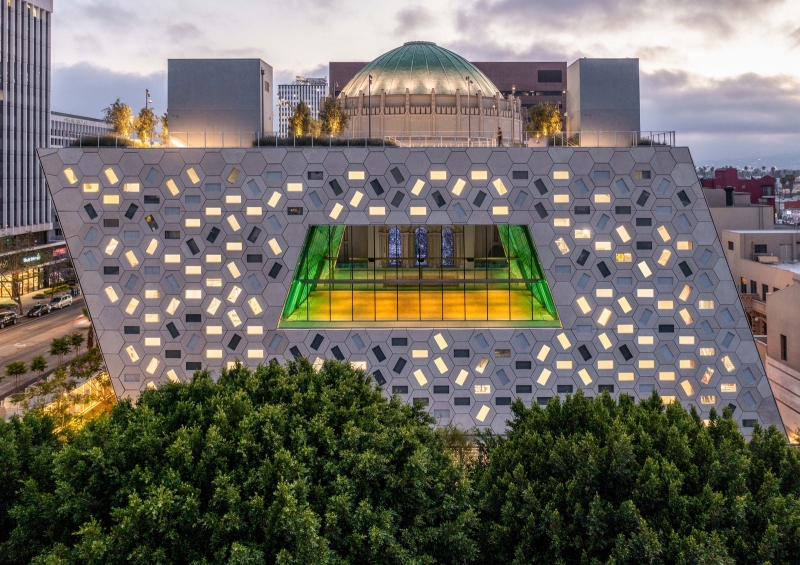 OMA architects have built a monolithic structure that deviates from the historic temple to let more natural light into the courtyard. At the same time, it stretches to Wilshire Boulevard, inviting residents to a new urban environment. 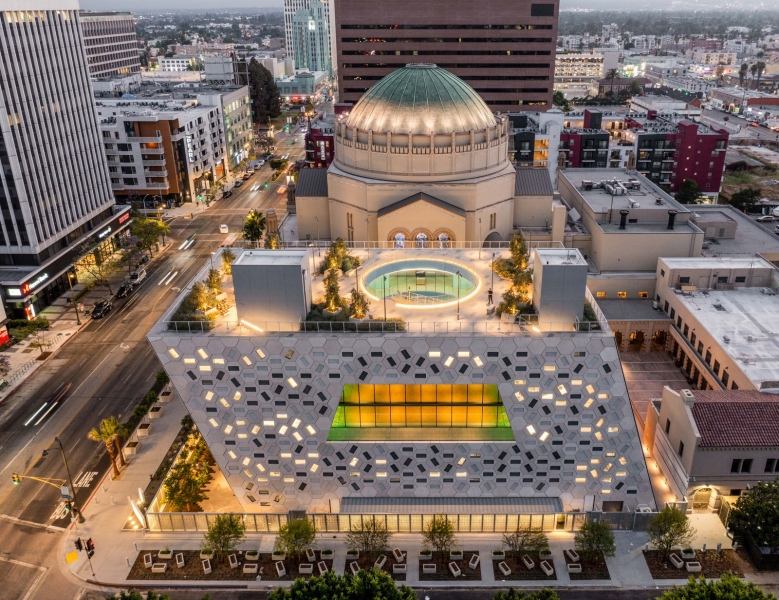 The simple form of the pavilion strongly contrasts with the complex historical architecture of the temple, at the same time, the new structure exactly repeats the shade of its facade. 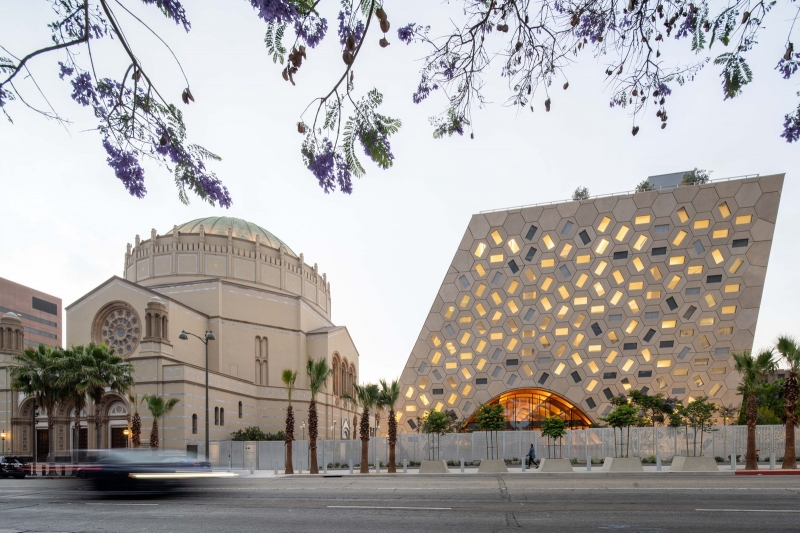 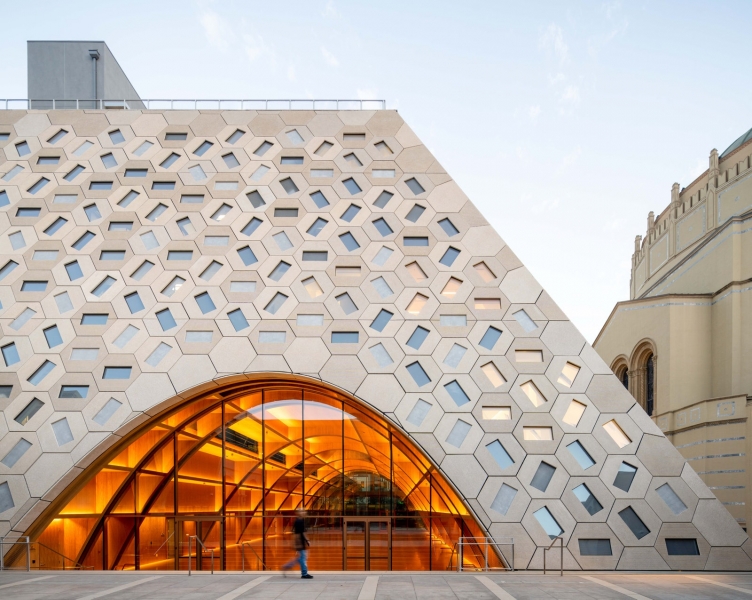 The pavilion includes three different gathering areas: the main large event space, a medium-sized chapel and terrace, and a small sunken garden. In each zone there are a number of openings that filter the light and frame the views of the temple and the historical school. 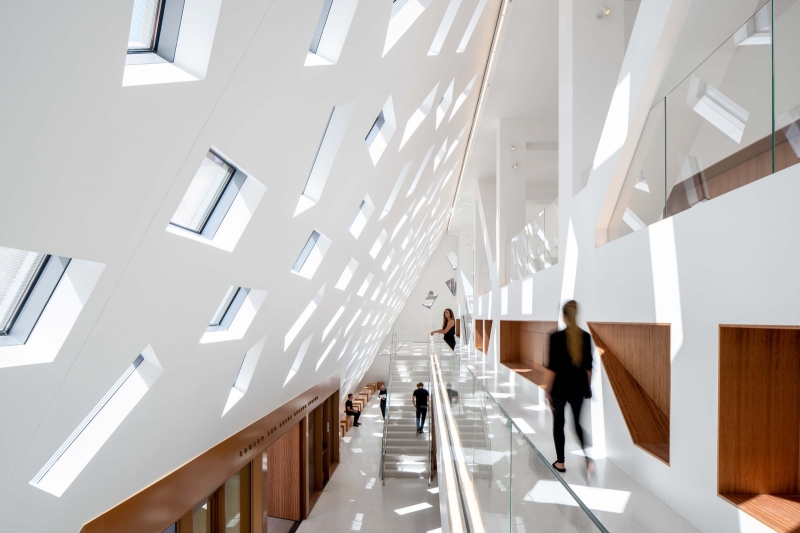 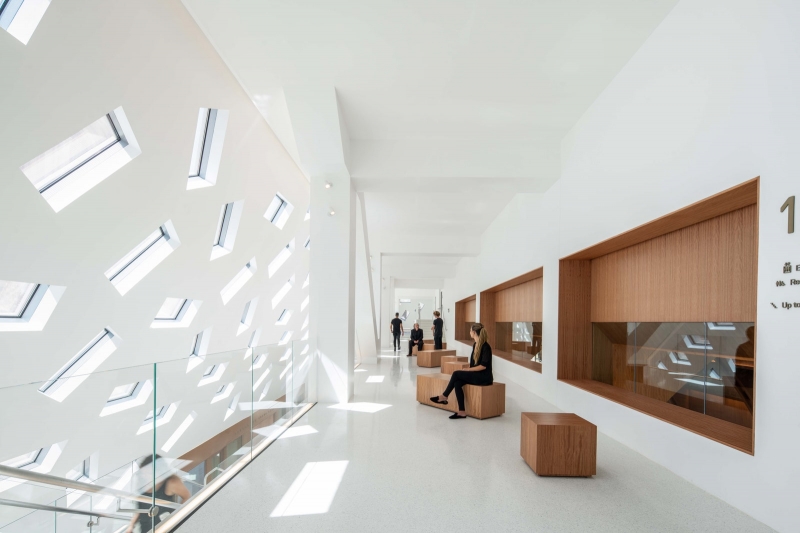 The entrance at ground level repeats the shape of the dome of the temple — an arc connects Wilshire Boulevard with the courtyard. The arch leads visitors to a vaulted space without columns, where banquets, conferences, performances and artistic events will take place. On the second level there is a more cozy chapel with a terrace. It opens a view to the west, framing the arched stained glass windows of the historic temple. 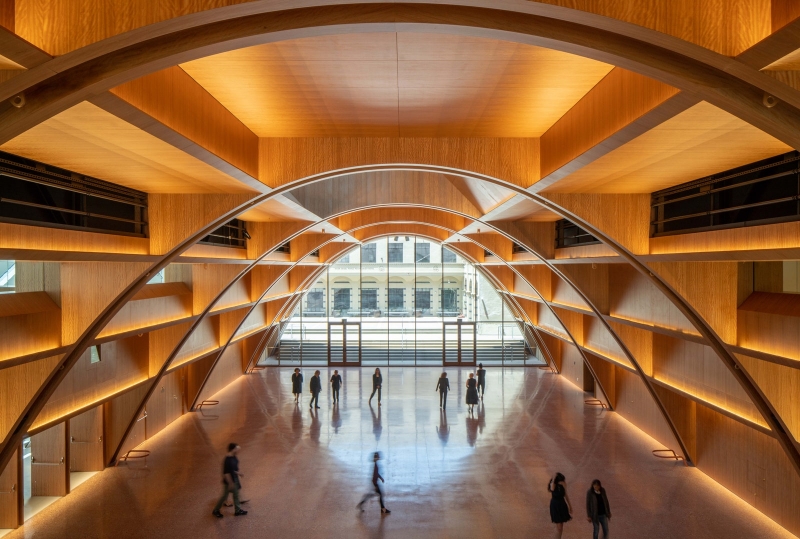 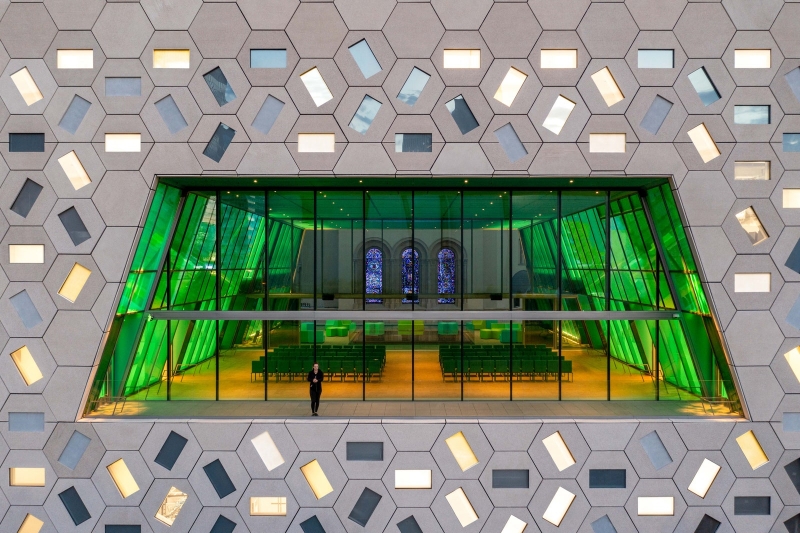 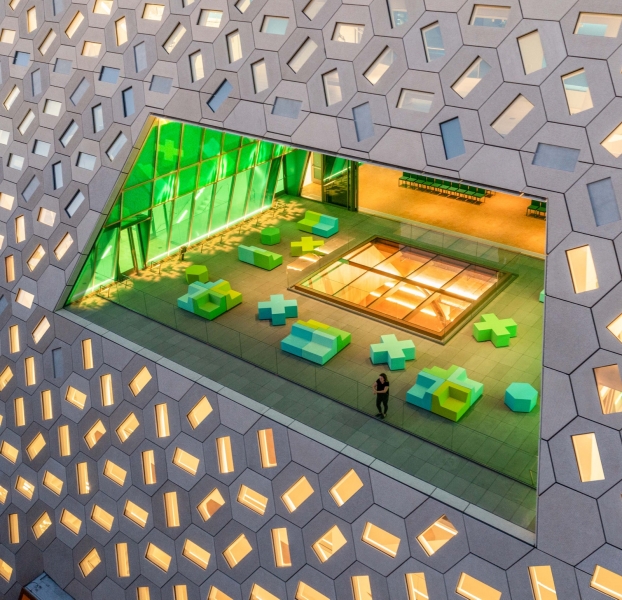 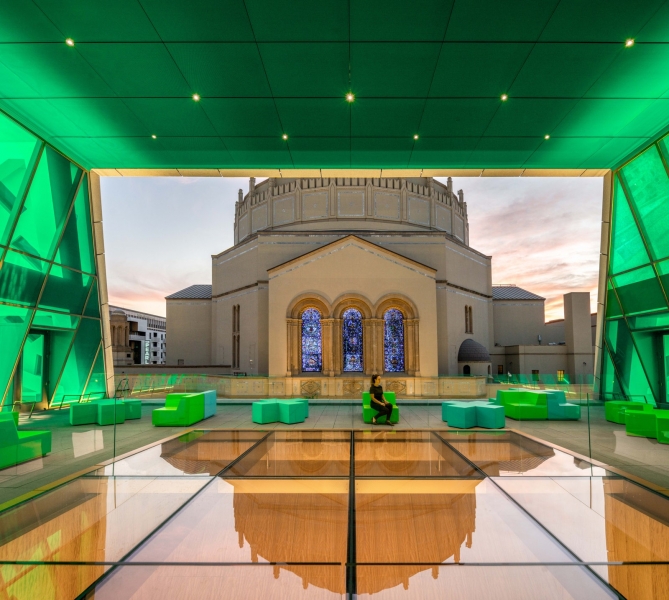 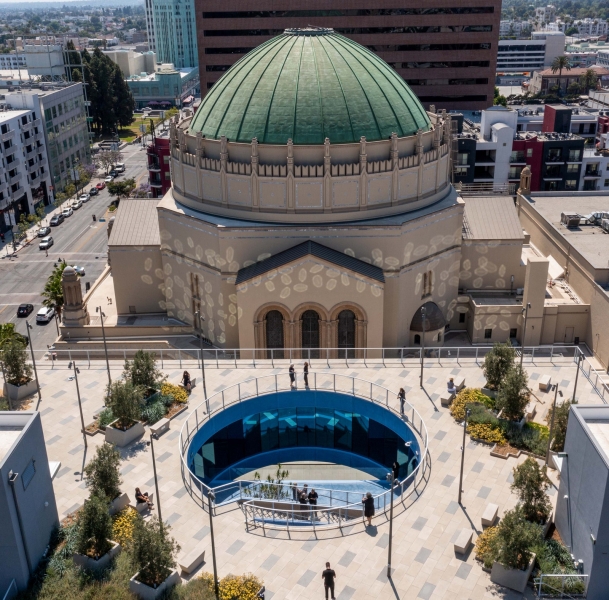 Reconstruction of a village house in Spain