In Moscow on Bolotnaya Embankment this week, on December 4, the House of Culture “HES-2″ opens. The State Power Plant HPP-2, built at the beginning of the XX century, came into the possession of the V-A-C Foundation and instead of electric energy will generate the energy of modern art. Alexey Tarkhanov, a correspondent of Kommersant in France, spoke with the 84-year-old author of the project, the famous architect and great museum master Renzo Piano. 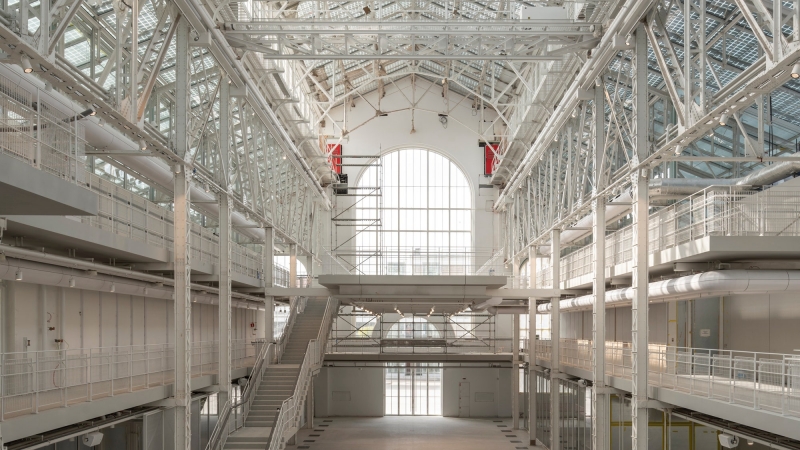 When we met nineteen years ago, also at the request of the Russian AD, you were preparing a project for the Moscow City. Then something went wrong. And now you have returned to Moscow — and with what success.

I can’t even remember what happened there with that old project. It happens with us architects. A small part of what we come up with comes to the point. But I am very happy with the current project. It was an offer you couldn’t refuse. I am very grateful to those brave people who conceived it and entrusted it to me. An incredible opportunity to discover the lost world in the very center of Moscow and transform it. A real gift. 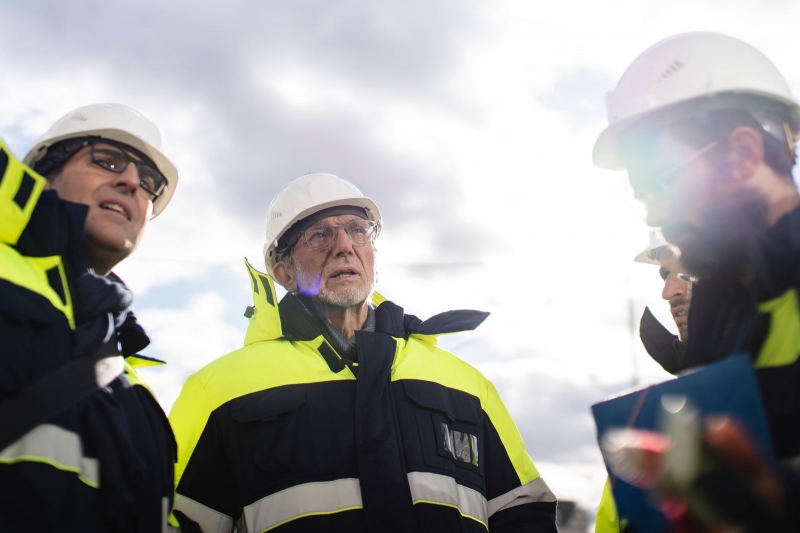 Renzo Piano (center) at a construction site in Moscow.

Your Pompidou Center has been compared to King Kong breaking into old Paris, and here you have a modest, gentle Snow White in the center of Moscow. Have you become more careful over the years?

Of course, there is a huge difference between the Pompidou Center and HES-2. We conceived Pompidou as a parody of a factory, and HPP-2 in Moscow was a real plant that produced electrical energy, just as Pompidou was created by a cultural energy producer. But there is also a lot in common. In both cases, we are talking about a special, unique place in the city — this is one, and about a building that had to be made public, open, accessible to everyone — these are two.

But at the same time they are not at all similar.

You know, I have already built more than thirty museums, but among them there is not one that would be exactly like the other. And it’s not because I’ve always made sure that, God forbid, it doesn’t happen again. Each time the place, the situation, the customers were different. The time was different, which also affects the architect. The city, the people, the purpose of the museum, the collections. No, if I were you, I’d be surprised if the two buildings were similar! 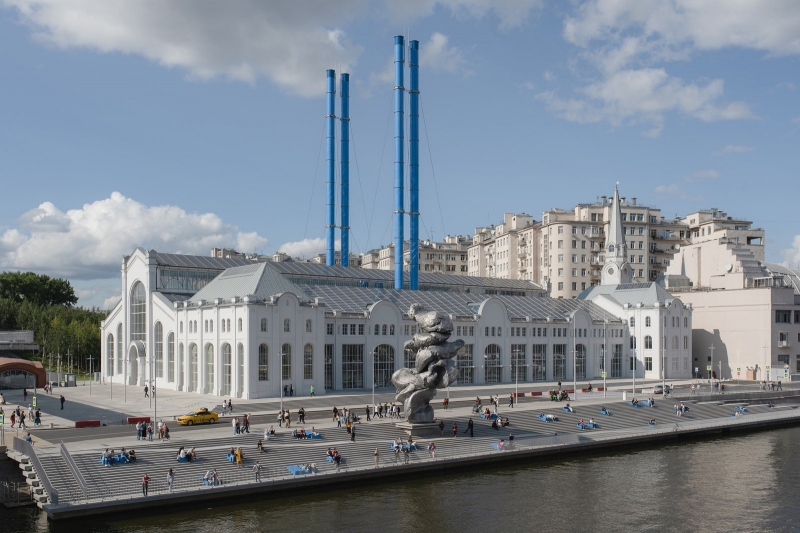 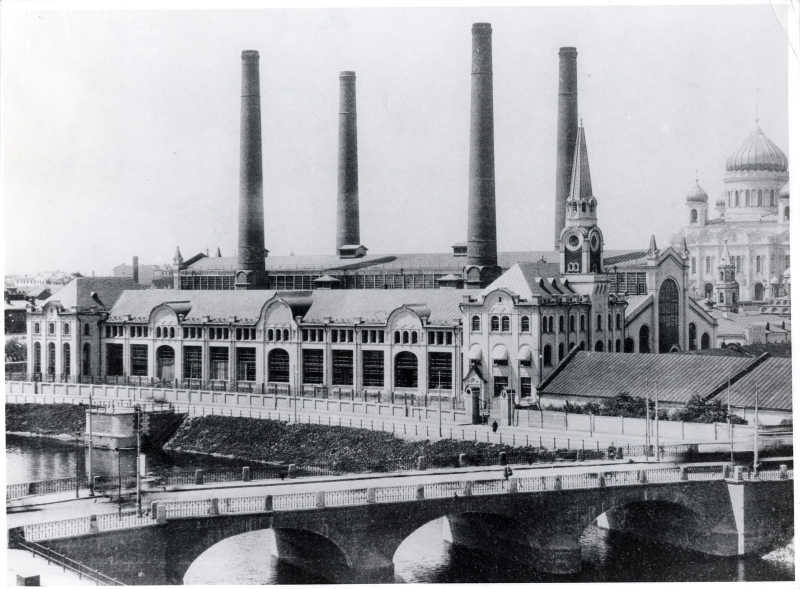 HPP-2 at the beginning of the twentieth century, photo from the archive of Mosenergo.

What, then, is special about the new project — what is the most important thing in it?

The most important element in Moscow is light. This is the temple of light, the palace of light. When people enter it, I am sure they will look with their mouths agape and their heads up. They will bathe in this light. For me, it was a revelation, you don’t expect such intense light from Moscow. You have it more often scattered, colder, more cloudy, without sharp shadows and contrasts. This is, of course, the northern light, although Moscow now knows both days and nights, as on the coast of Italy. 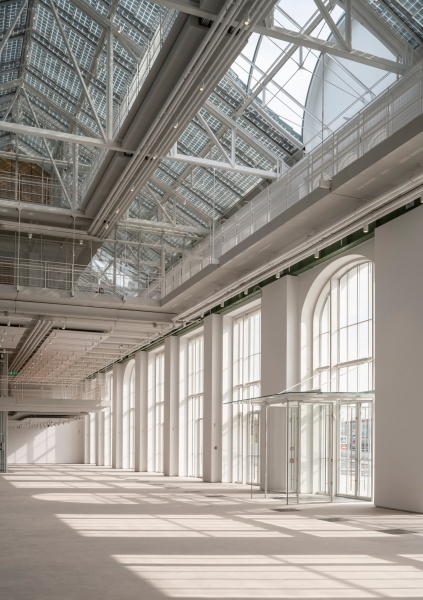 Solar panels on the roof will provide 10% of the energy needed for the operation of HPP-2.

You added an open—air hall to the building — like a sculpture garden — and planted it with birches. Quite in Russian, but then why not apple trees, as once around Moscow State University, or Chekhov’s cherry orchard?

I’ve been thinking about it, but I find that birches are still more correct here. If we consider them as an extension of architecture, they give a better feeling of walls and roofs. Birch trees in summer will hide from the sun and even light rain. In addition, we have already planted mature trees, we do not have to wait for them to grow and outline the additional space we have invented. 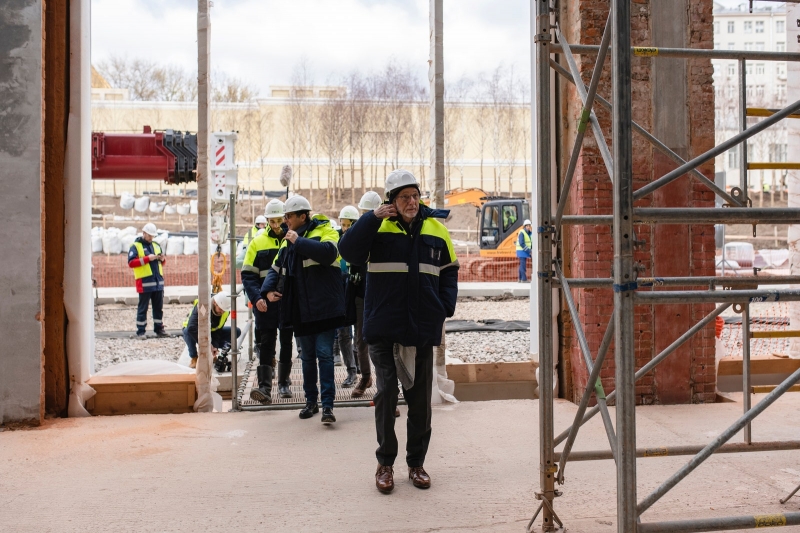 Renzo is drunk at a construction site, behind him is a future lawn with a birch grove. 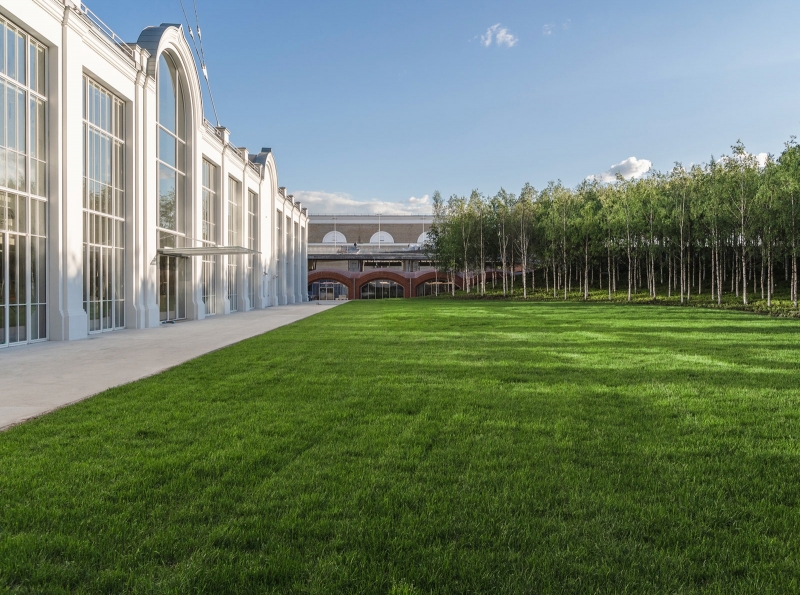 And so the lawn with the grove looked like in the summer of 2021.

And what will happen to this open hall in winter, under the snow? Boboli Gardens are impossible in Moscow.

Snow is a miracle, how little you appreciate it. I was once in Moscow during a snowfall, and when the snow lay on the branches of the birches, it turned out a magnificent arabesque, amazing lace. It just took my breath away. Snow adds light because it reflects it. I’ve always adored birches, and now I also adore birches under the snow. And how good they are in May, when the first leaves appear, and even earlier, when the buds are just emerging. This is the promise of spring, the promise of a meeting. A small forest of birches is a metaphor of time that goes in a circle, it’s a rendezvous with winter, a rendezvous with summer. 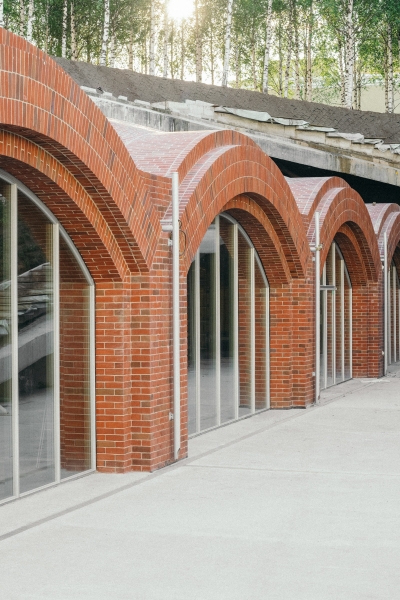 «Vaults— is a building of vodka warehouses accidentally discovered during the restoration process. Now there will be workshops here.

The museum forest is still something new, especially for Moscow, although I don’t think they will go here for mushrooms.

HES-2 is not only a museum, although, of course, it is also a museum. But I’m always afraid of the very word «museum». It smells of boredom, it is dusted with dust, this is something for specialists, for «keepers” who «keep» it all, and from whom — yes, from you and me, probably. Perhaps that’s why, when I was as ill-mannered a boy as my friend Richard Rodgers, we built the Pompidou Center, a museum that refused to be a fortress of science. I find that, on the one hand, the new house of culture should be given museum equipment. Museums are still something noble. But it is necessary that HES-2 in Moscow was not only a museum, but also a place where you feel good, a place of meetings, entertainment, flirting, joy, which Muscovites will love, which will meet their desires.

Now the Pompidou Center is being put on reconstruction. Are you involved in this project? Do you agree that your building is really outdated?

Reconstruction is necessary, because, of course, the times are different. We need new equipment, we need the building to consume less energy, that is, we need to rebuild the motor of this machine, which is the Pompidou Center. And since the building was conceived to be changeable, modifiable, flexible, adaptable, this is completely normal. It has to keep up with the times. Of course, my workshop participates in this project at the request of the Ministry of Culture.

And how will HES-2 change over time? A wonderful project, it reminds me of a light clipper with light sails, which sailors admire, but then suddenly it turns out that iron dreadnoughts are already being built at the shipyards, which will own the seas. Suddenly the new house will become outdated, barely opened?

I love yachts, I like your comparison. But I seriously think that culture needs spaces that can change in time with how culture itself is changing. And in the case of Moscow, there is evidence of the flexibility of the building. It was a factory, and industrial buildings of the XIX-XX centuries, palaces for cars— are very flexible buildings. Electric generators disappeared, generators of modern art appeared. A lot can be done in this building, you can divide it into compartments, you can add parts, as we added the «Auditorium». In general, «HPP‑2» in this sense, it reminds many of the Pompidou Center, it is a convenient building for alterations. But flexibility is not an exclusively technical issue, it is also a cultural issue. Culture is changing all the time — as fast as technology. 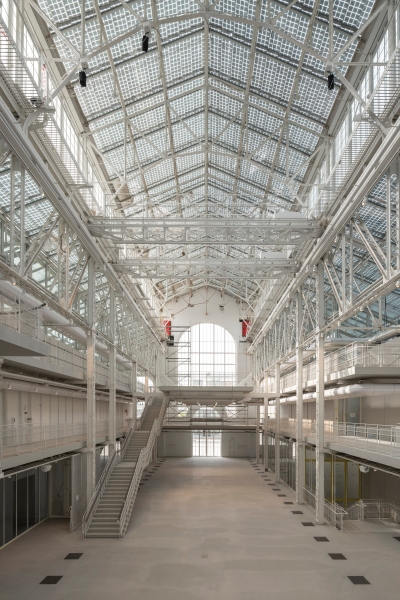 Renzo Piano conceived the renovated HES-2 space as a temple of light.

The HES-2 center will open soon. You have experienced such amazing days many times. How do you feel when your work goes to customers?

It’s a very romantic feeling, I don’t know what to compare it with. An amazing moment, like launching a ship into the water, is the same holiday. But from the moment everything is finished, speeches are dissuaded and the ribbon is cut, the building no longer belongs to you. Until you have passed it, it is yours, you are in charge of the site, the architect is the king and god on the construction site. And then you lose everything at once. A mixture of joy and sadness, the end of an adventure, the end of a great journey that begins and which, unfortunately, ends like life, like love. But it is very important that when you complete a building, you give it not only to a specific person, even if his role is huge and he is the owner and inspirer, you give the building to the whole city. 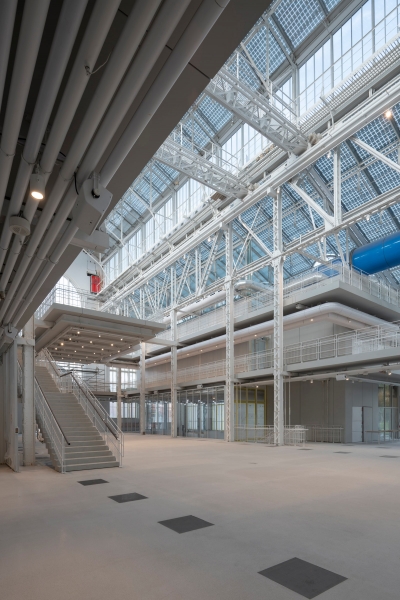 Blue pipes go inside the building and provide it with fresh air — it is taken at an altitude of 70 meters, where there is no smog.

There are several art studios in your project. Master classes will be held there, artists will work there. But you have placed a bakery among them. Why? Do you like the smell of bread?

Of course! I appreciate the light, the sun, the water, the feeling of joy, happiness. And in this feeling, smells are also important. No wonder I love to use wood in my architecture, but the smell of fresh bread is the most pleasant smell in the world. 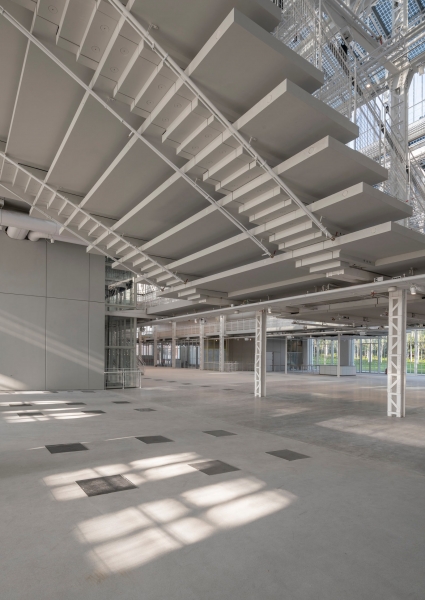 The staircase, which is also a grandstand — there will also be concerts in the HES-2 program. 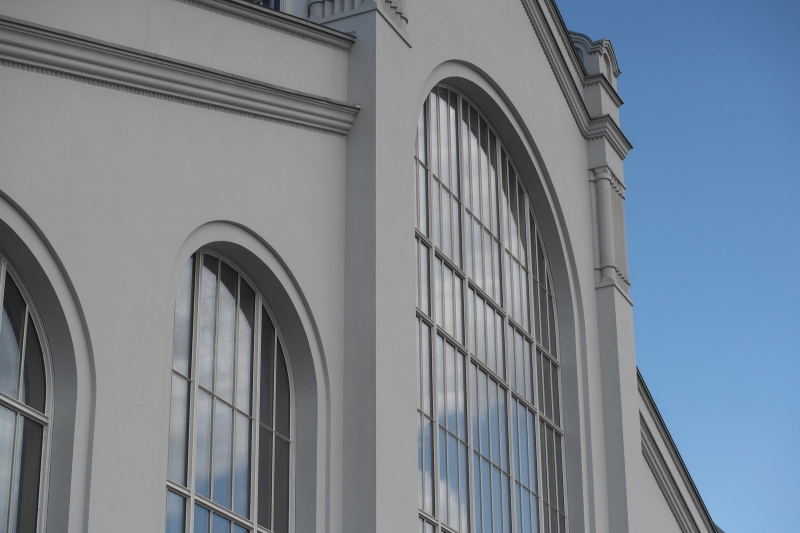 The arched window of the central nave. 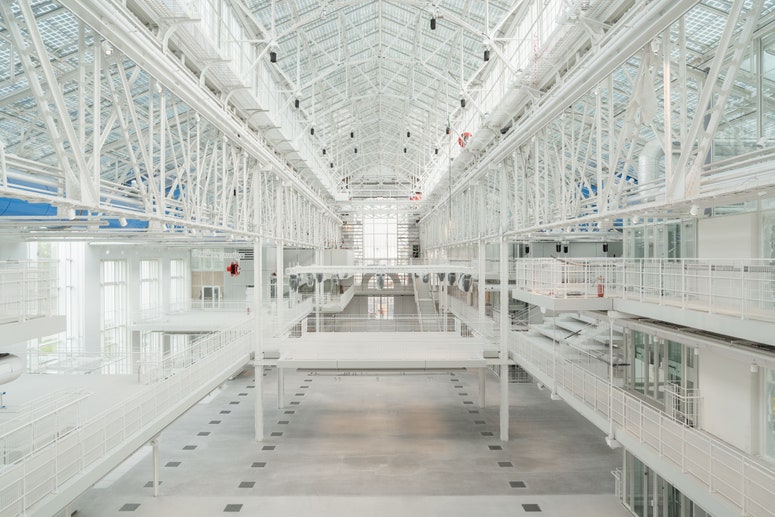 A new place of power in Moscow: The House of Culture “HES-2″ will open a new public space in Moscow on December 4 — the House of Culture «HES-2». AD exclusively talks about the architectural concept of the first Renzo Piano Building Workshop project in Russia and explains why this is a completely unique space both for Moscow and for Renzo Piano himself. Read