Photographer Alessandra Ianniello was lucky to be at Villa Buonaccorsi after a heavy snowfall. 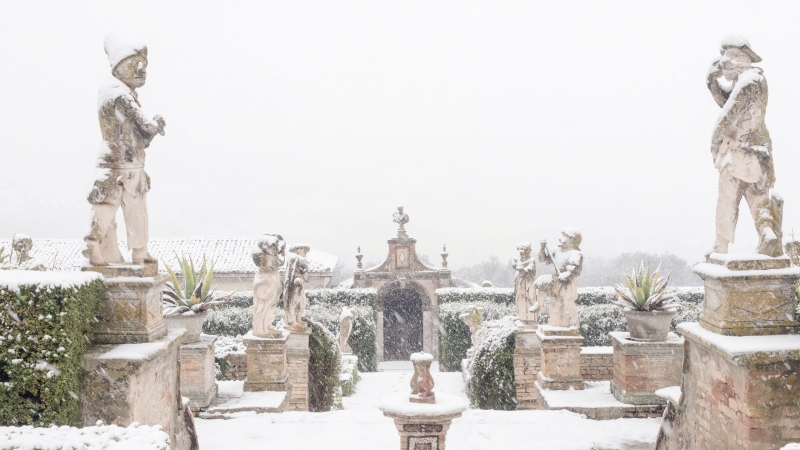 Figures of Commedia dell’arte characters are installed along the stairs connecting the different levels of the garden; in the foreground, under the snow, you can see Pulcinella and Harlequin. Above is the home theater, Teatrino di Ciccobirbo, where the owners of the villa entertained guests with performances.

The Buonaccorsi family has absorbed immigrants from different parts of Italy — Tuscany, Sicily, Lazio and Veneto, but for their summer residence they chose Potenza Picena — a hilly area in the Marche region, near the Adriatic. In 1500, they acquired a villa here, which now bears their name. At that time it was a building with a solid three-hundred-year history, but architecturally quite modest. In the XVII century, the Buonaccorsi decided to rebuild it in the then fashionable Palladian style and hired the architect Pietro Bernasconi, who had previously worked under Luigi Vanvitelli, the author of the Roman Palazzo Poli and the Caserte Palace for the Neapolitan King Charles VII. 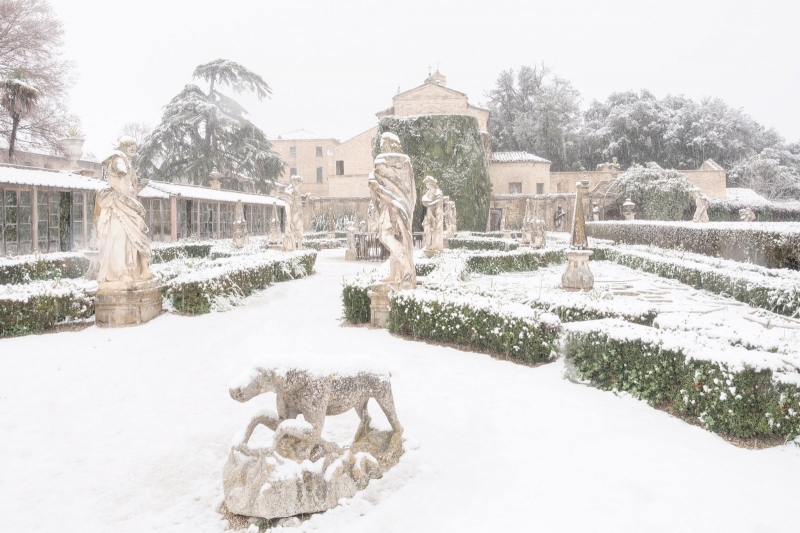 In this part of the garden there are two statues of dogs — dogs belonging to the Buonaccorsi family are buried under them. The family church can be seen in the background, it is still in operation — wedding ceremonies are held there.

During the same period, a terraced garden was laid out around the villa; it is located on five levels and descends from the southern slope of the hill — towards the lands where agricultural land was located in the past, which ensured the financial well-being of the owners. The Buonaccorsi were secular people, so the garden, the author of which is considered to be Andrea Vici (another student of Vanvitelli), was designed in such a way as to entertain guests in it. Every corner of this space is filled with sculptures created by the sculptor Orazio Marinali and his students. There are a total of one hundred and ten statues, there are also numerous fountains, benches for relaxation and even its own theater. Improvements to the garden continued until the middle of the XX century, when the last representatives of the family lived in the villa, Count Carlo Buonaccorsi and Countess Giuseppina Matteucci Buonaccorsi. It is considered to be one of the best preserved gardens in Central Italy, and now it is entrusted to the care of gardener Attilio and three of his assistants. 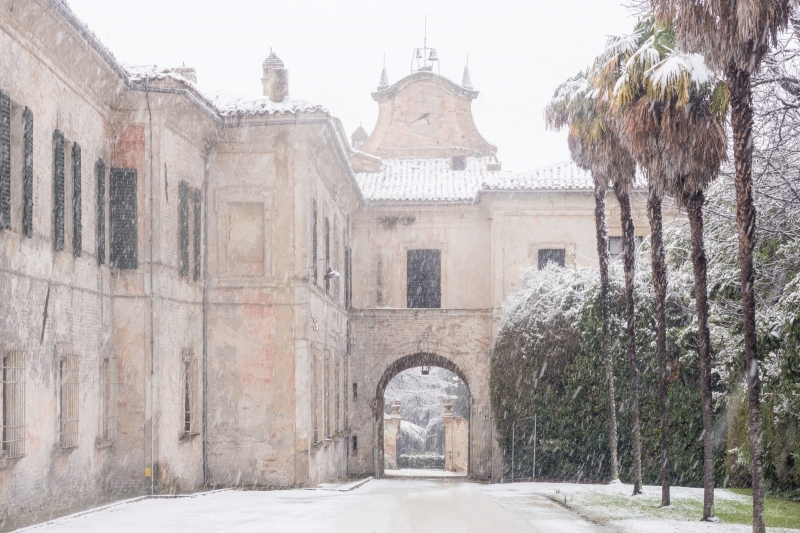 A gate can be seen behind the arch. They lead to the garden. 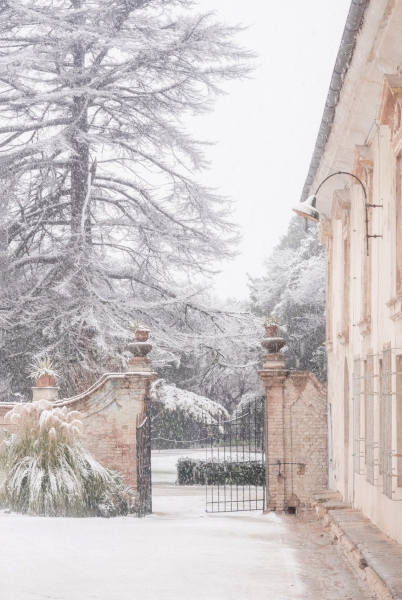 Behind the gate there is a tree that is several centuries old. There are a lot of plants in the estate that are at least two hundred years old. Of course, the gardeners who take care of the garden these days are doing everything to preserve them.

Summers in this part of the country are hot, but in winter it is cool and snow is not uncommon, although it does not lie for a long time. In the past, only servants could observe such a spectacle: the owners moved to the winter residence with the onset of autumn. But nowadays, the heirs of the Buonaccorsi family have sold the family property, and now the villa and the garden around it have become a tourist attraction. Lucky guests can witness how snow wraps ancient buildings and evergreen vegetation, muffling colors and hiding shapes. At such moments it seems that nature is the main minimalist architect. 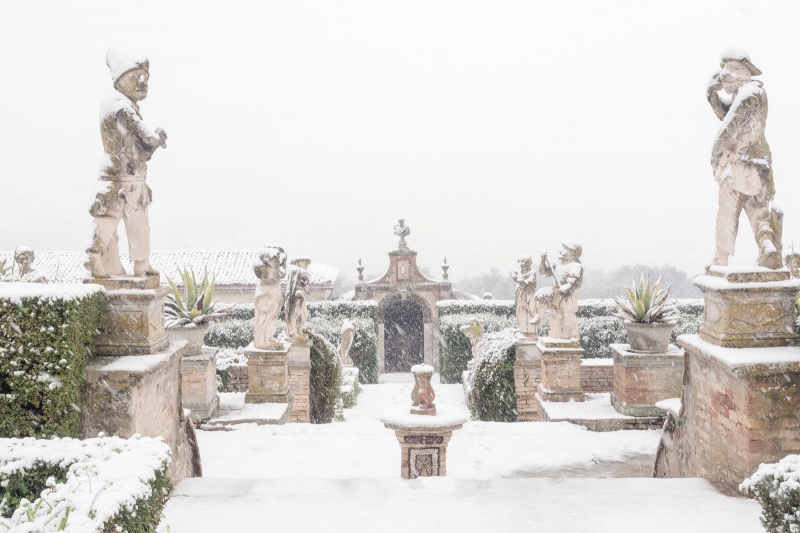 Figures of Commedia dell’arte characters are installed along the stairs connecting the different levels of the garden; in the foreground, under the snow, you can see Pulcinella and Harlequin. Above is the home theater, Teatrino di Ciccobirbo, where the owners of the villa entertained guests with performances. 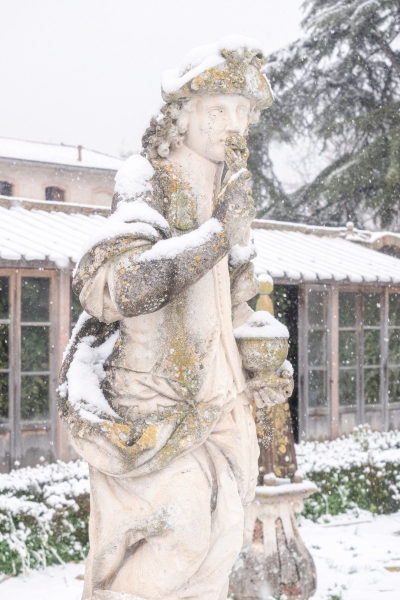 In addition to the statues of ancient heroes, Commedia dell’arte characters and fantastic creatures in the garden there are images of notable people dressed in the fashion of the XVIII century. 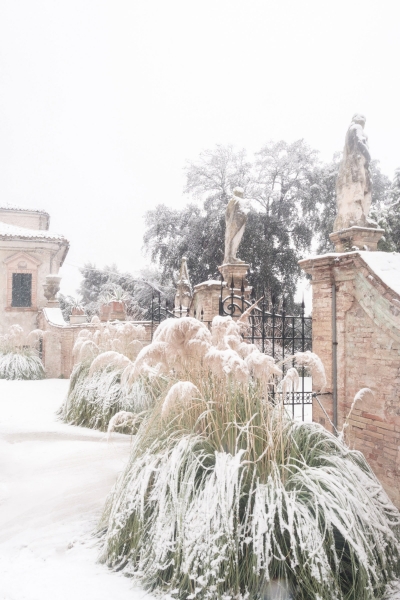 The entrance to the villa is guarded by two sculptures that serve on both sides of the gate. 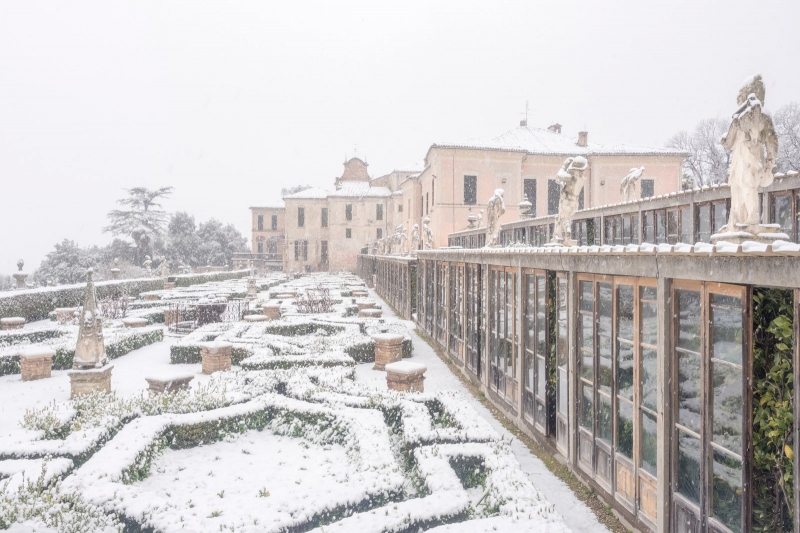 Greenhouses in which tubs with lemon trees overwinter were built back in the 1700s. Surprisingly, they still have the original glass. However, the lemons themselves are also many years old.