Megabudka Bureau has built a Hospitality Center in the Kudykina Gora Park in the Lipetsk region, which plays up the features of national Russian architecture. 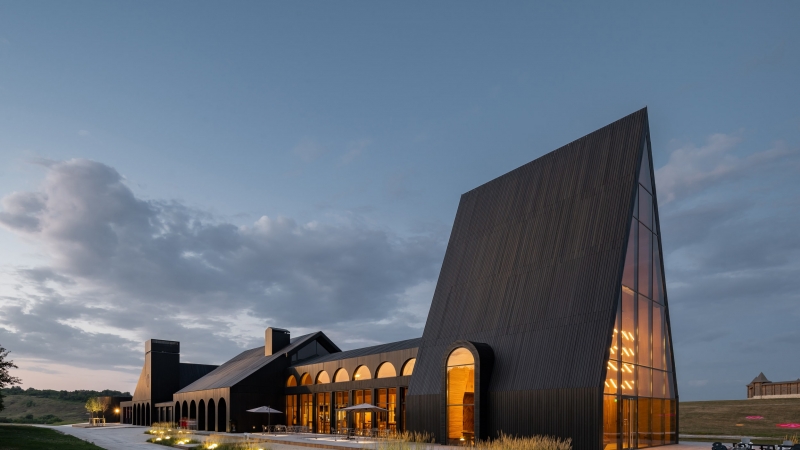 To build a Hospitality Center, Megabudka architects conducted research and developed their own vision of a new Russian style. It is not artificially derived, but is based on cultural aspects inherent in the national architecture and mentality. 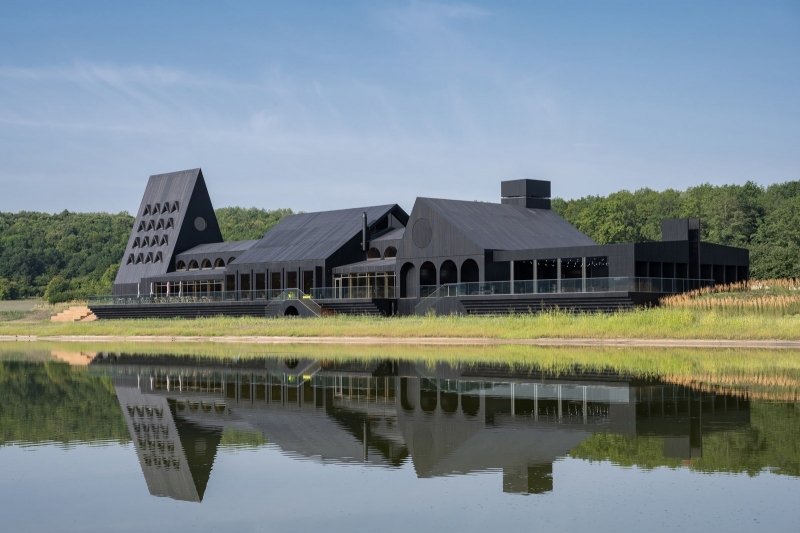 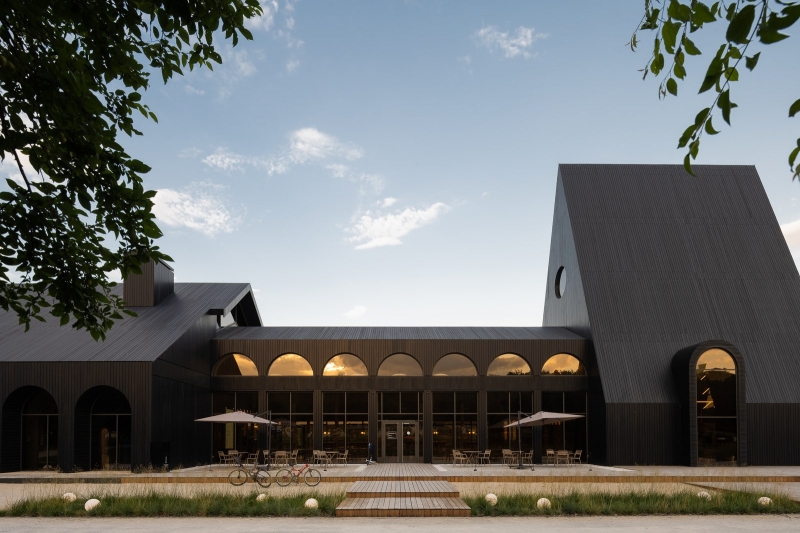 The first structure designed in this style is located in the Kudykina Gora Park in the Lipetsk region. Architects together with the owners have been engaged in its development for several years. All the details — from architecture to fonts and logos — were already created in accordance with the concept of “rethinking national identity». 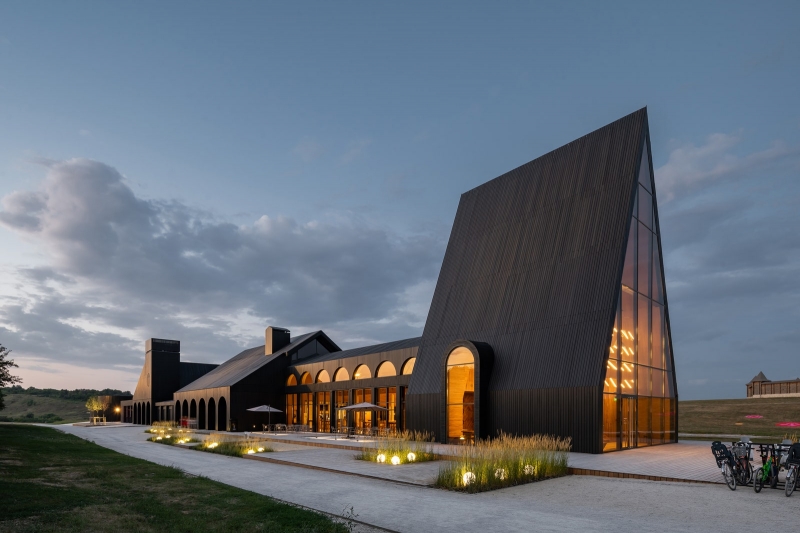 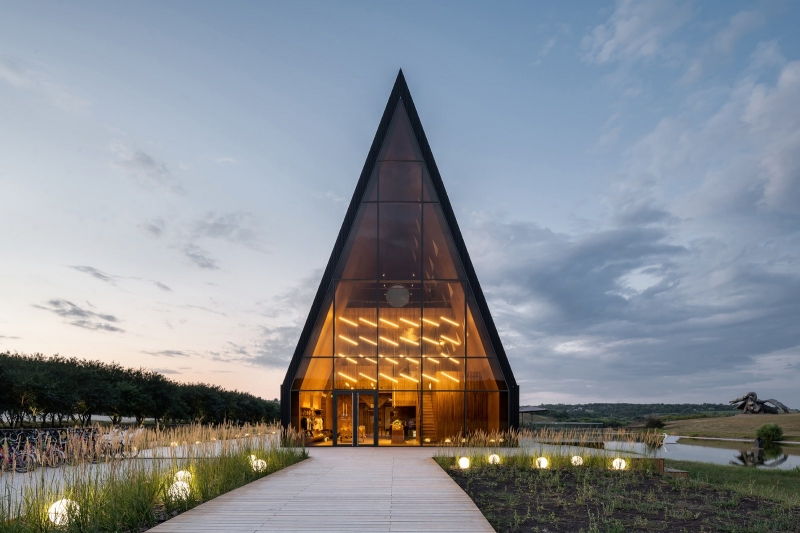 The complex of buildings is located at the starting point of the circular route at the entrance from the public parking lot. He welcomes visitors and offers to choose the direction of travel. The buildings of the Hospitality Center differ in shape, height, and functionality, but together they form a cozy facade resembling a fragment of a street in the old city. 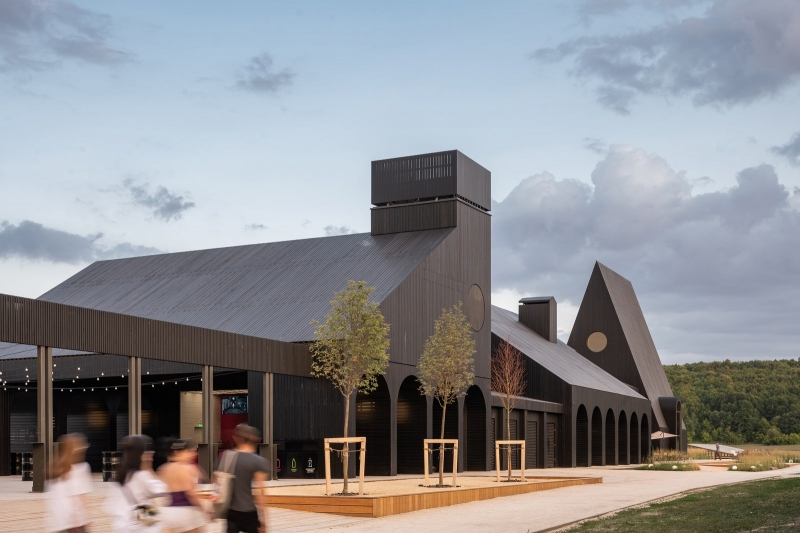 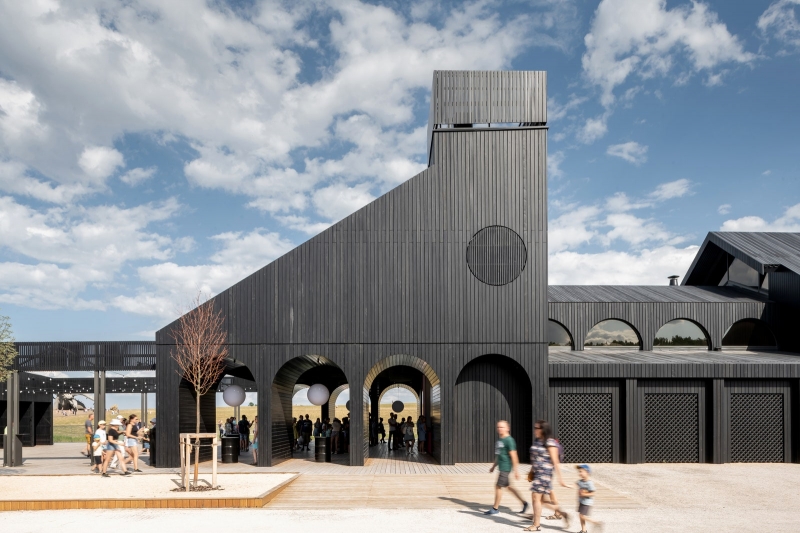 The buildings are united by a stylobate, on the roof of which there is a wooden terrace. Due to the relief differences, it also plays the role of an observation deck, which offers views of the pond, the fortress and the sculpture of the fire-breathing Gorynych, one of the main attractions of the park. If you look at the center from the side, the shape of the stylobate, slightly overhanging the grass, resembles a rook used in Ancient Russia. 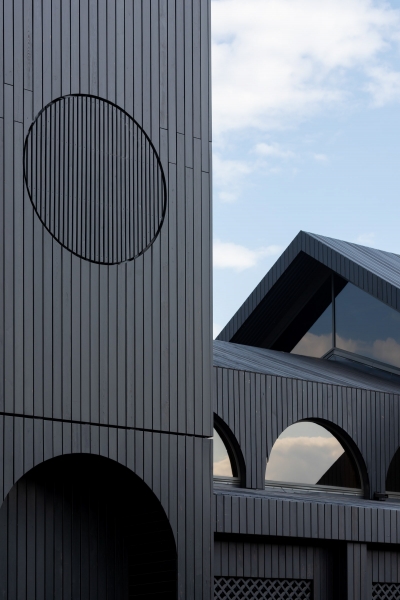 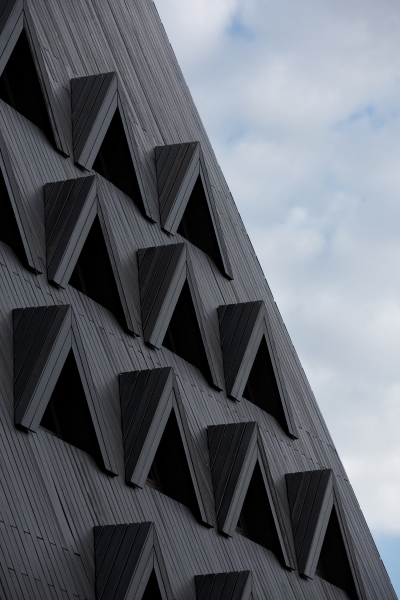 The facade is made of dark wood, as if burnt out in the sun, and refers to traditional wooden architecture. And the ornaments of triangular windows, grilles, belts and various ways of laying boards play out archetypal images of the Russian hut. 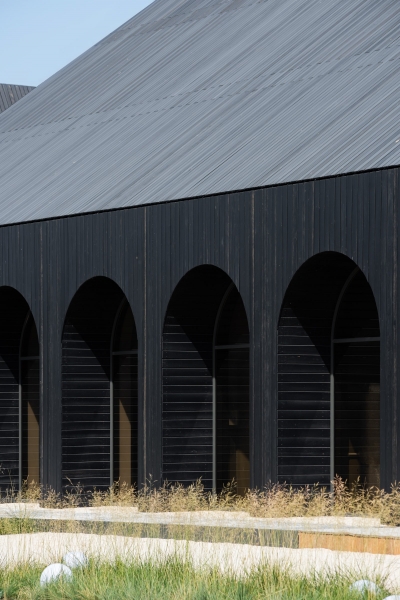 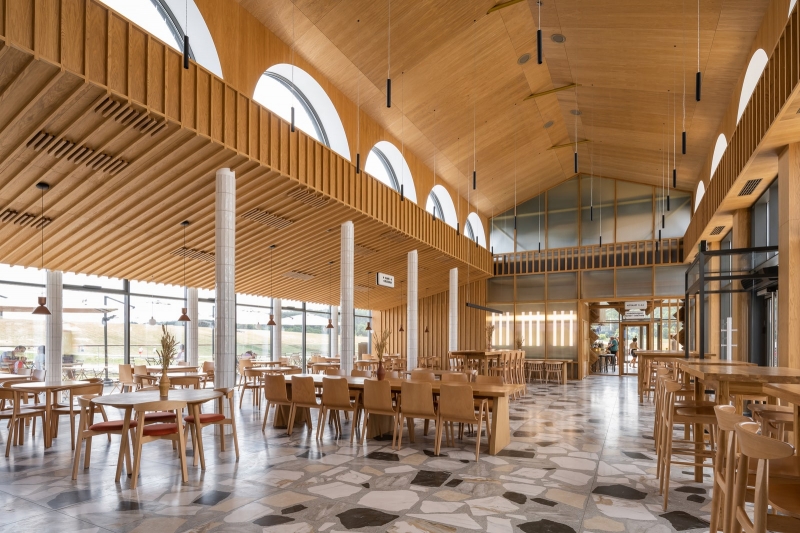 The dark exterior contrasts with the light interior. The abundance of details and textures of natural materials creates a cozy atmosphere, and huge windows open views of the park. There are also many references to architectural techniques of different eras of Russia and the USSR in the interior space, but they are all reinterpreted and presented in a new modern interpretation. 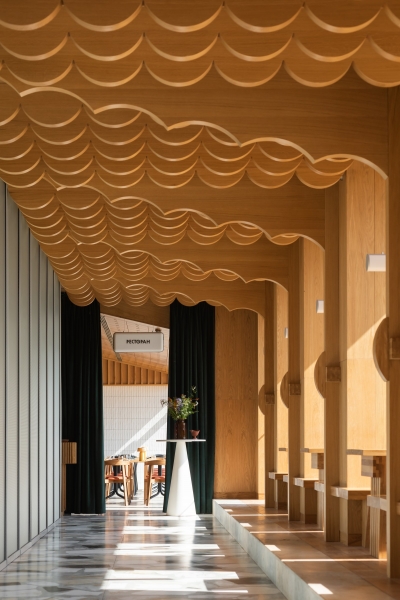 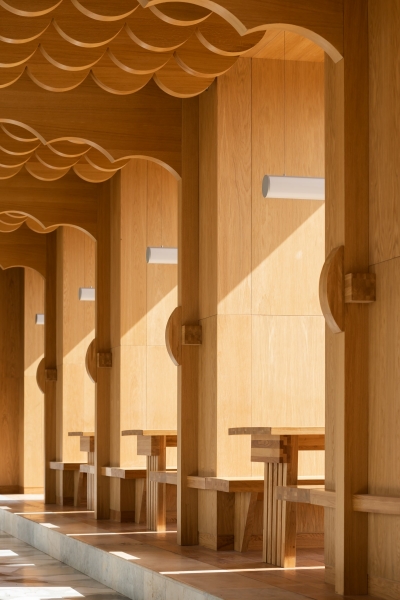 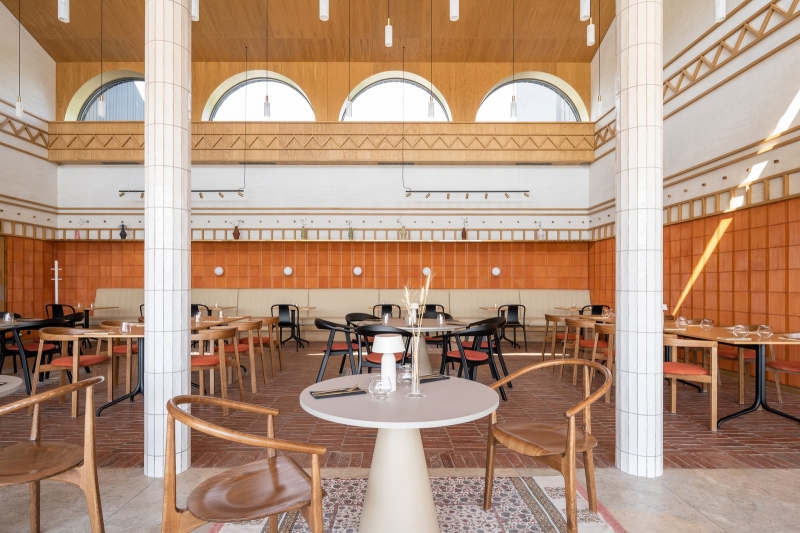 The complex of buildings will still be completed, but for now the lobby, a restaurant, a cafe similar to a spacious hut, as well as a street food building and a toilet enclosed in a round volume are available to visitors. 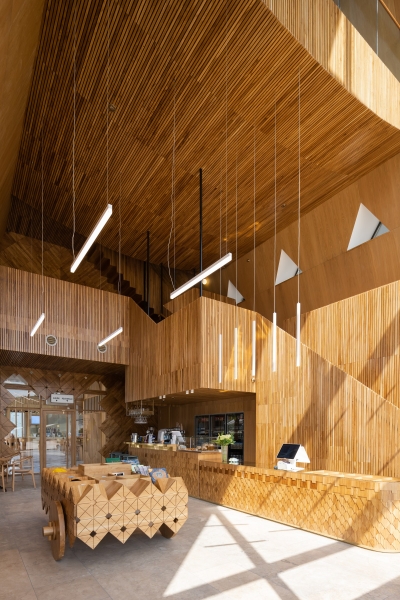 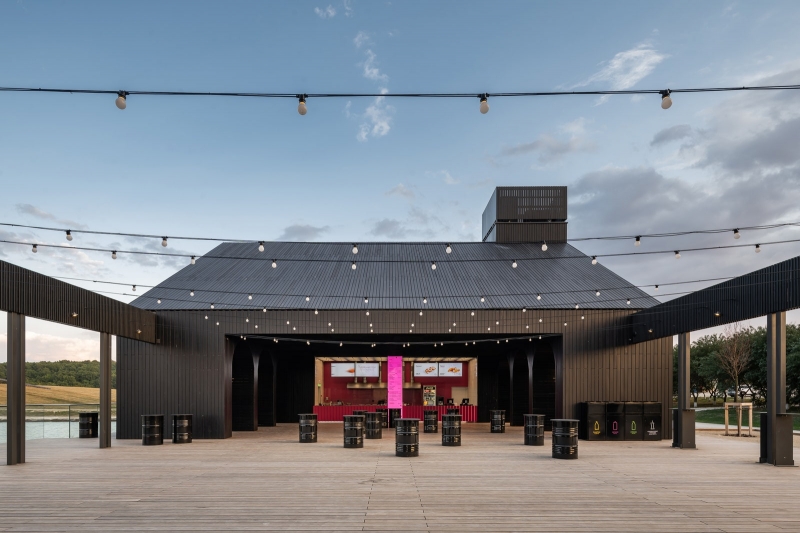 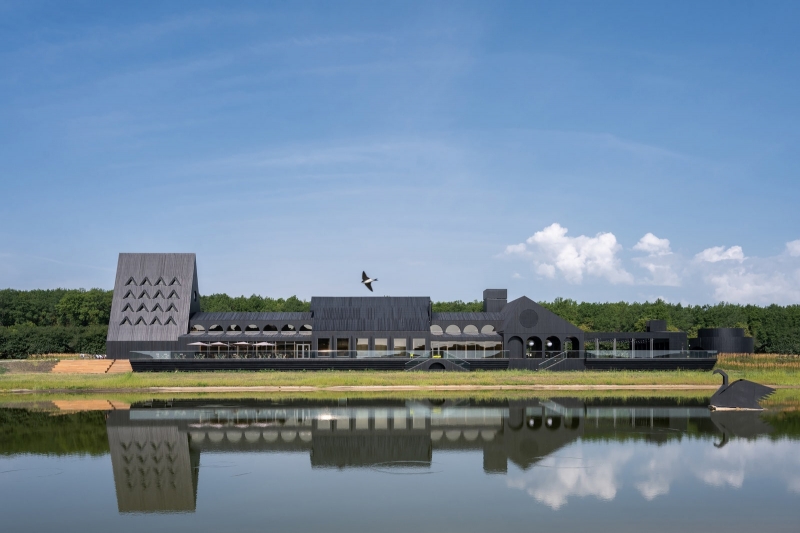