The victory in the special nomination from MR Group “Discovery of the Year” AD Design Award 2021 was won by the Northern River Station of Moscow. In September 2020, it finally opened after a large-scale restoration. 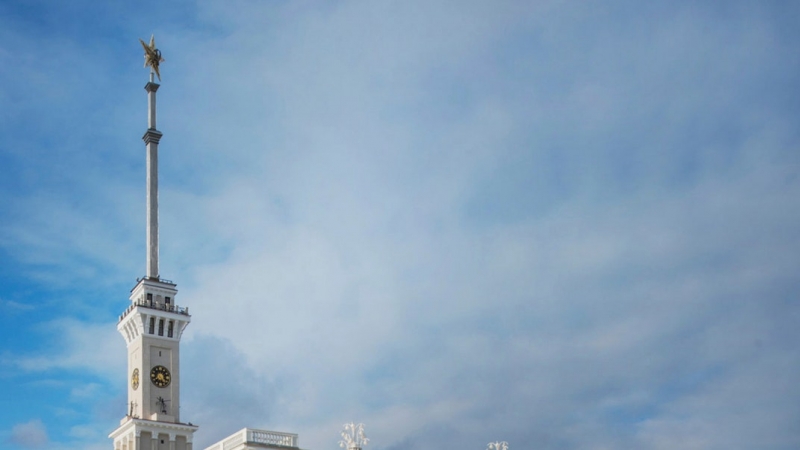 The Northern River station can safely be called the first public space of the USSR, but its design and construction were not at all “public”, but under the heading “secret». The station building was erected in 1933-1937, in parallel with the construction of the strategically important Moscow–Volga canal, which was worked on by prisoners of the Dmitrov correctional labor camp, which is why all the materials were under the jurisdiction of the NKVD and were not available for research for many years. 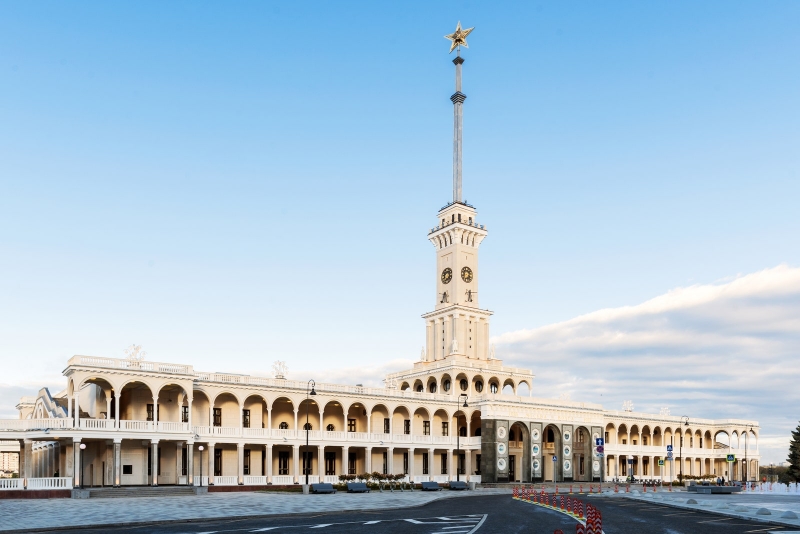 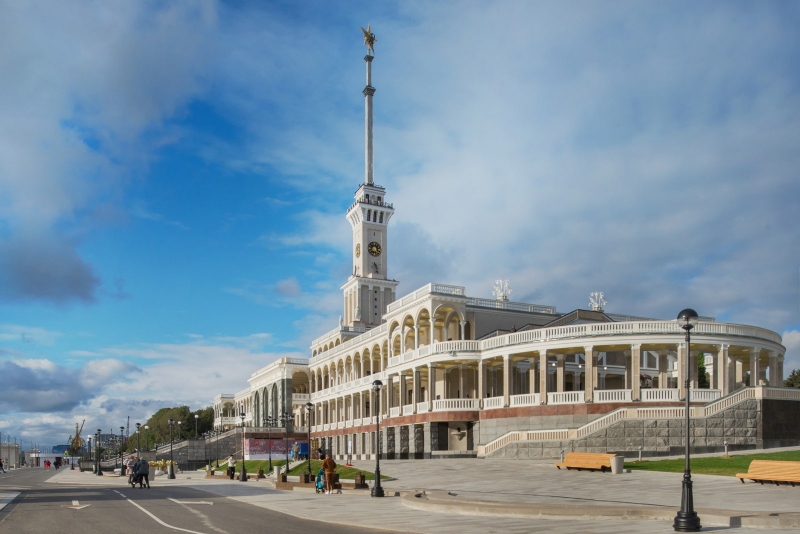 The building of the Northern River Station was designed to demonstrate all the best that was in the USSR, and to become a kind of personification of the Soviet way of life — the hallmark of the city, as required by the era. The chief architect of the station, Alexey Rukhlyadev, was guided by the palace’s ceremonial architecture and, of course, was inspired by the best examples, for example, the Venetian Doge’s Palace — this is guessed in the colonnades of the Northern River Station, consisting of one hundred and fifty columns. 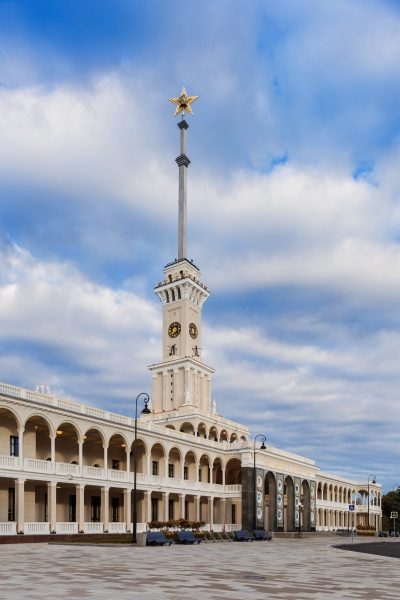 The facade of the Northern River Station from the embankment side. The weather vane star adorning the spire was lowered for restoration, the masters manually sorted out the gems and restored the gilding so that the star sparkled again. The spire will rise on the opening days and fall on the closing days of river navigation, as it was conceived in the original project. 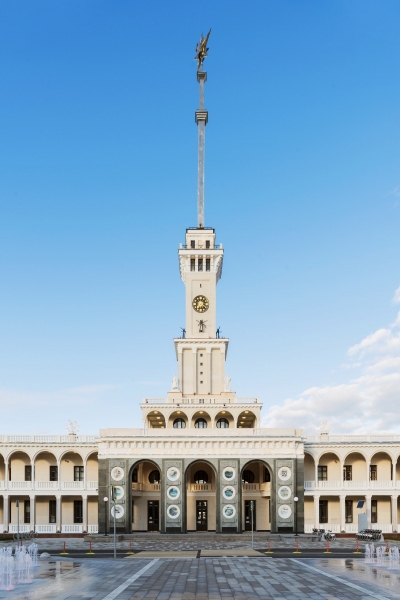 In appearance, a huge elongated building, similar to a majestic ship, is divided into three semantic blocks inside: a waiting room, a grand lobby facing the park and the embankment, and a restaurant. A lot of myths have overgrown the “special purpose” room, which was dubbed “Stalin’s office”, although, judging by the available materials, Stalin had never been there. This room was most likely used for meetings and waiting for their flights by important members of the Soviet government and foreign delegations. 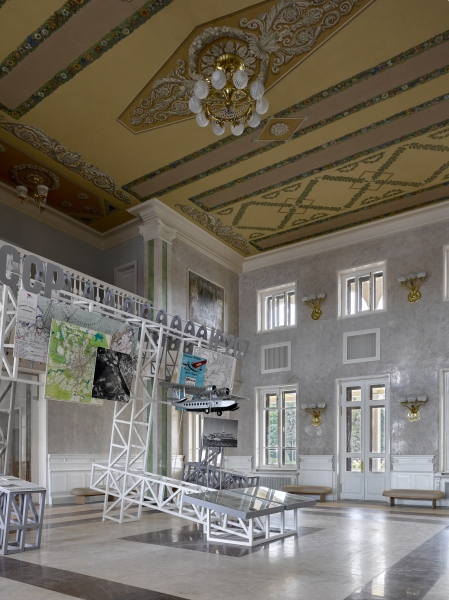 The pop-up space of the Moscow Transport Museum is located in the historical waiting room. The exposition will change every two months. 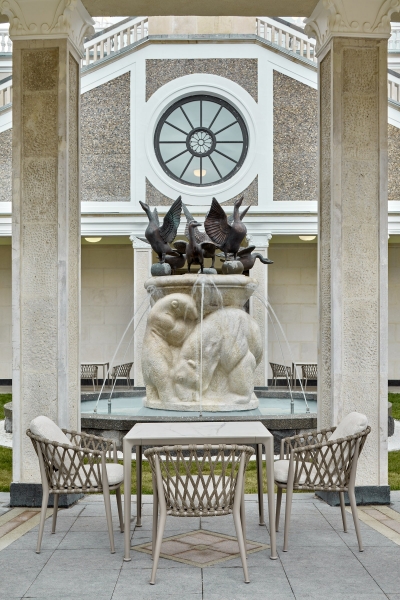 In the 1960s and 1970s, when passenger traffic fell, the building began to fall into disrepair. By the Olympics-80, they decided to “update” it and did it carelessly, simply painting over the original finish. In the 1990s, it was leased to various enterprises that treated the architectural monument without respect, changed the decoration, sealed the windows and eventually severely damaged the original decorative elements. In 2015, the station building became the property of the city, and in 2017, the long-awaited restoration began, the result of which we can see now. 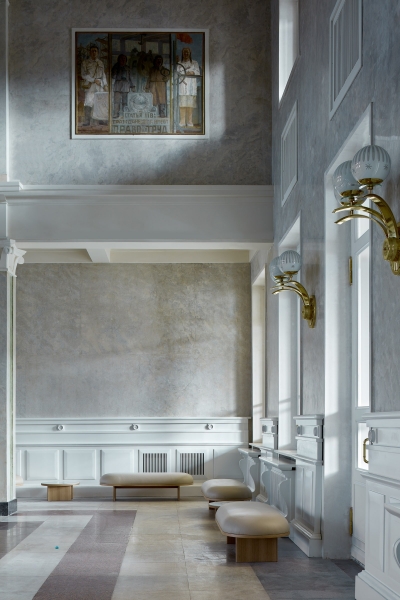 In the waiting room, decorated with light-colored oselkov marble, the furniture of the Scandinavian factory Please Wait to be Seated, benches and tables from the Anza collection look organically. All the lamps in the station building are original — the restorers cleaned them and restored the lost parts. 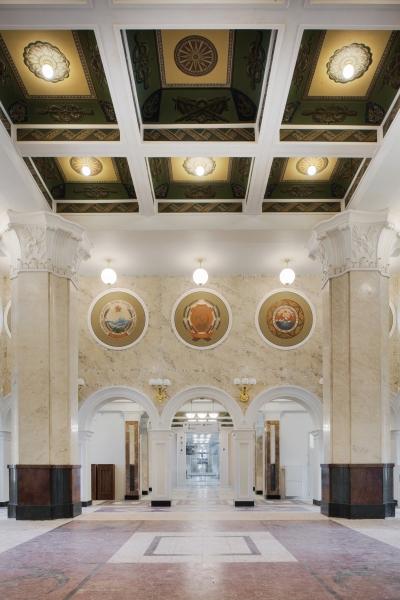 The entrance area of the station. All the coats of arms of the Union republics were restored according to archival drawings.

More than five hundred people worked on the project — architects, restorers, artists and designers. Restorers restored magnificent murals in the interiors of the Northern River Station, twenty-four porcelain panels on the facades, original lamps, including “lilies of the valley” on the roof, as well as parquet and floors in different rooms, not to mention the famous retractable spire and giant star. As it was planned during the construction, a terrace appeared on the roof of the station again, with a view of the Khimki reservoir. 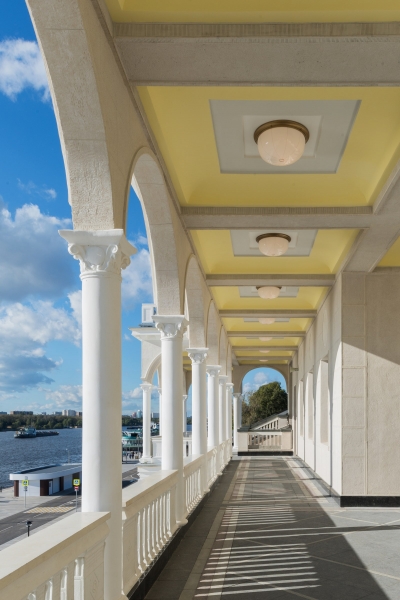 The colonnade of the Northern River Station is decorated with 150 columns. 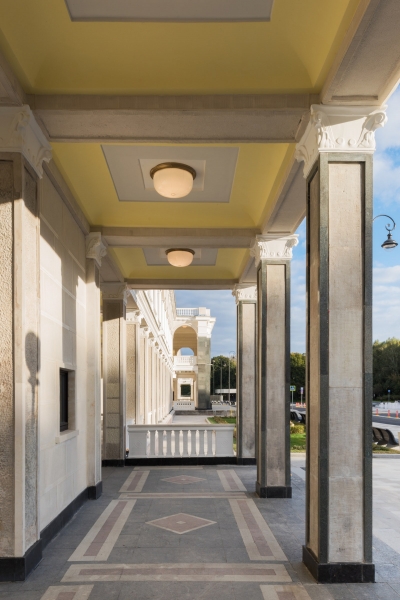 The decoration of the lush interiors was handled by a team of designers who needed to complete an ambitious task in a short time. As a result of their work, benches and tables Please Wait to be Seated appeared in the waiting room and in the museum space, the Volga-Volga restaurant was decorated with items from another Danish brand Gubi, and its veranda was decorated with B&B Italia outdoor furniture. Lush landscaping appeared in all the halls – the designers were inspired by archival photographs of the station, which was once decorated with the same palm trees in tubs. 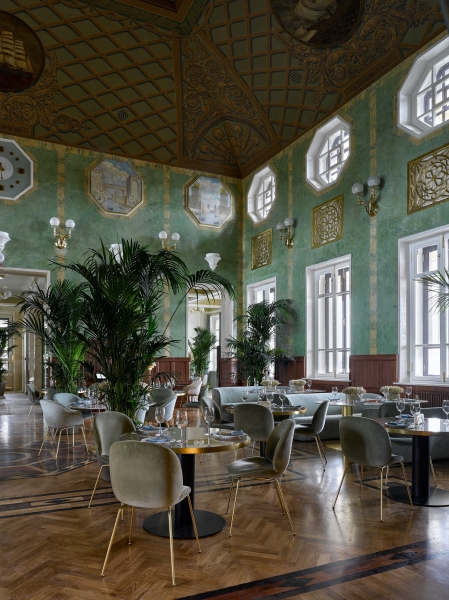 The interiors of the Volga-Volga restaurant are especially good at sunset: the rays of the sun through the upper windows softly illuminate the space. With the help of palm trees, the designers wanted to achieve a “resort” feeling: from the Northern River Station, people go on trips not only to the north, but also to the south.

Almost all the furniture was made to order in record time. For the restaurant, the designers chose brass bases for the legs of tables and chairs, echoing the sparkling gilded lamps. In the drawing of the restored parquet there are black diamonds — dark countertops were matched to them. 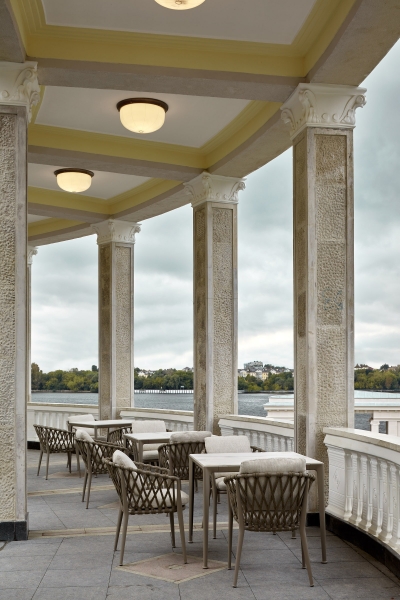 The veranda of the Volga-Volga restaurant with outdoor furniture B&B Italia.

For the office of tour operators, furniture was made to order at the Italian factory Morelato. The choice of factories was dictated by the historical credo of the building: “all the best at once.” Therefore, spectacular modern furniture from the world’s leading factories has become so organically integrated into elegant interiors. The designers were also engaged in landscaping spaces and took archival photographs of that time as a basis, in which they spied that there used to be a lot of palm trees here. 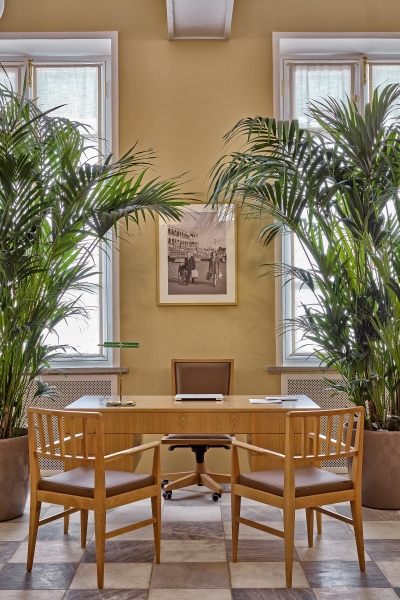 The office of tour operators in the building of the Northern River Station. All furniture in the style of the 1920s is made to order at the Italian factory Morelato.

It is worth coming to the Northern River Station first of all to see a unique monument of the Stalin Empire era, to study the restored fountains “South” and “North” from the ends of the building, to walk along the colonnades of the station and along the embankment, on which the layout of the Moscow–Volga canal is now located. 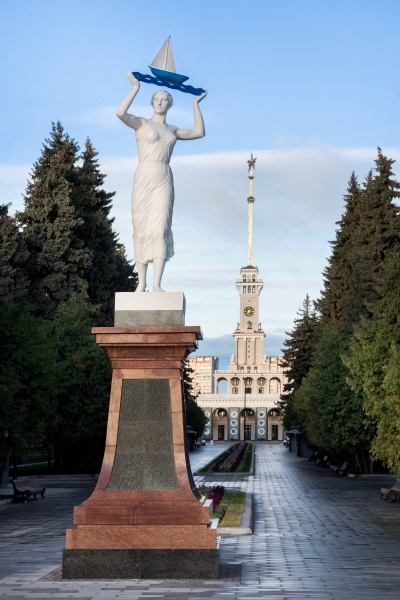 Sculpture “Waterway» at the entrance to the park of the Northern River Station, sculptor Yu. A. Kun, 1937. 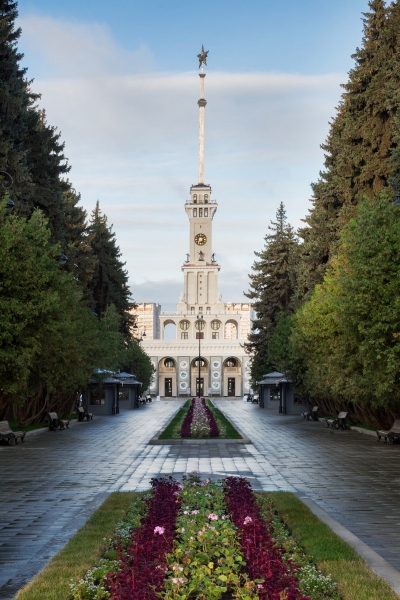 The embankment became a continuation of the renovated park of the Northern River Station — new paths were laid in it, rental cars were equipped and all original sculptures were restored. The pop‑up space of the Moscow Transport Museum is now located in the historical waiting room, its exposition, according to the director of the museum Oksana Bondarenko, will change every two months. 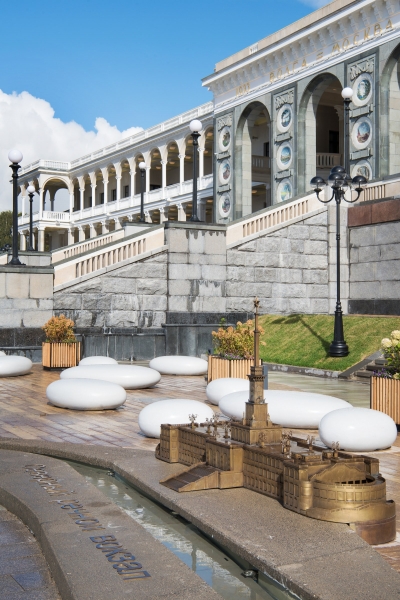 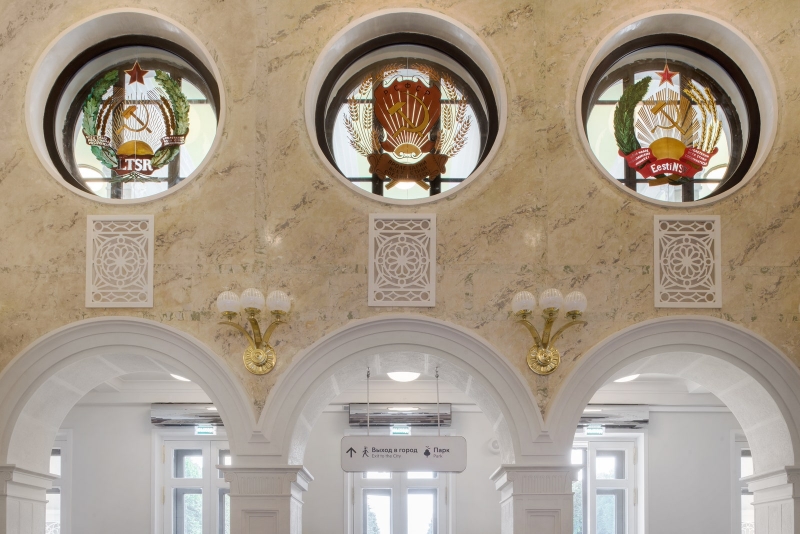 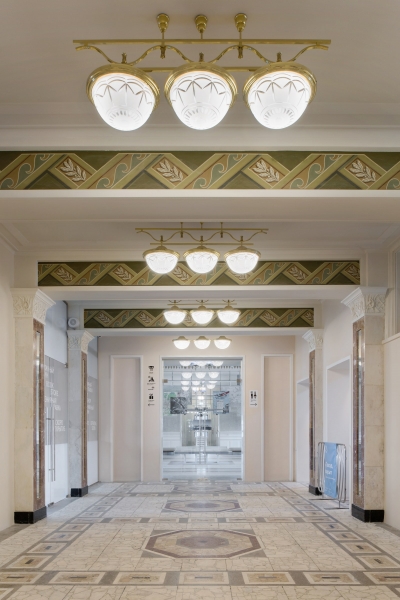 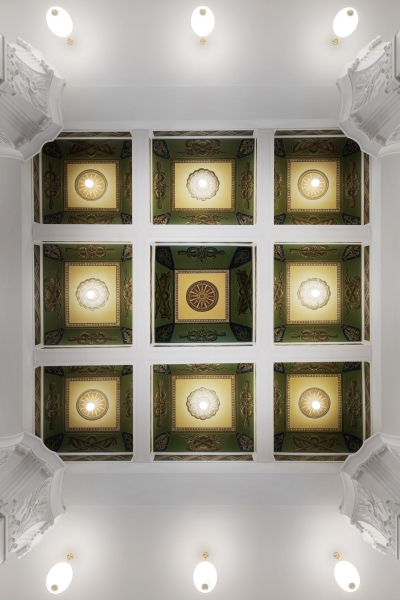 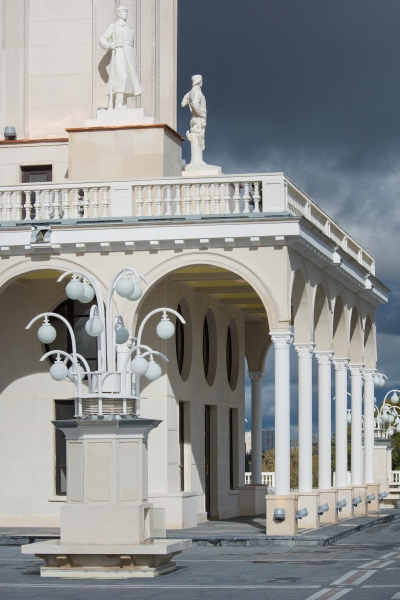 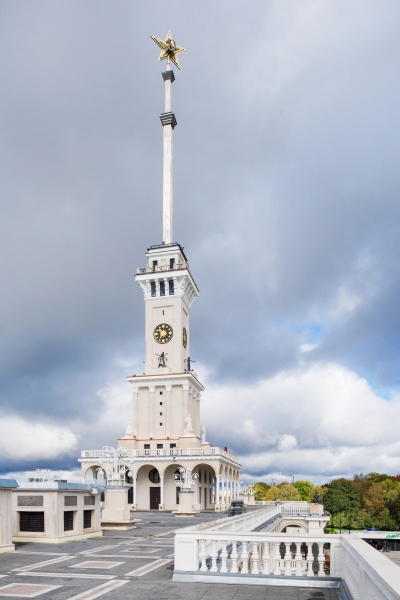 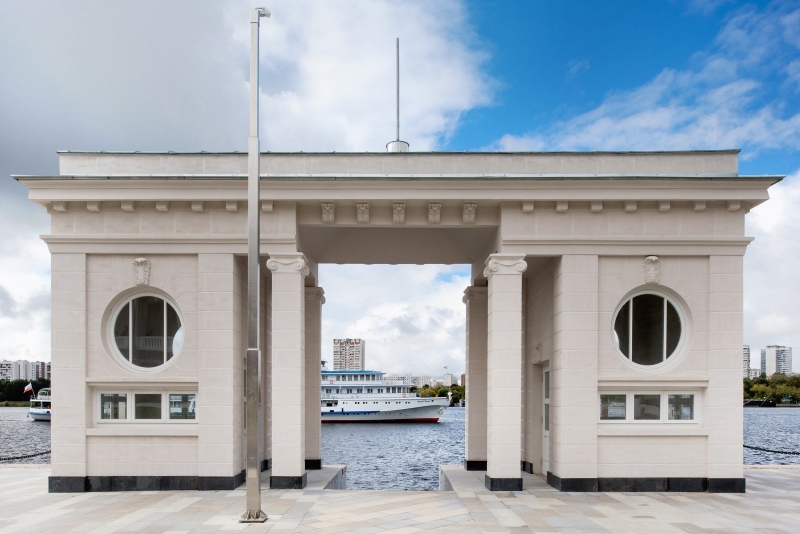 Public of the week: «Old Moscow”