What was built as a luxury urban resort for wealthy tourists has turned into a creepy unfinished ghost town in Turkey. 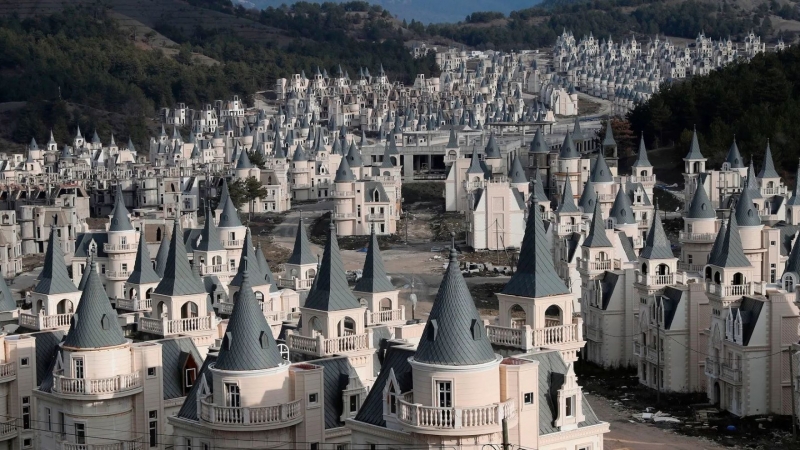 Burj al-Babas consists of 700 multi-level castles, half of which were already sold in 2019. After the infamous world events, the Turkish economy was shaken, and the fate of the new complex became uncertain.Photo: Getty Images

In the last few centuries, European monarchies have lost their power and authority over the affairs of their countries, but their chateaux, castles and palaces have remained intact. There is something in the luxury and extravagance of these buildings that prolongs their life for centuries. Perhaps this was the course of thought of the Yerdelen brothers, Turkish developers who were going to build Burj al-Babas — a complex of 732 mini-castles near the Black Sea. 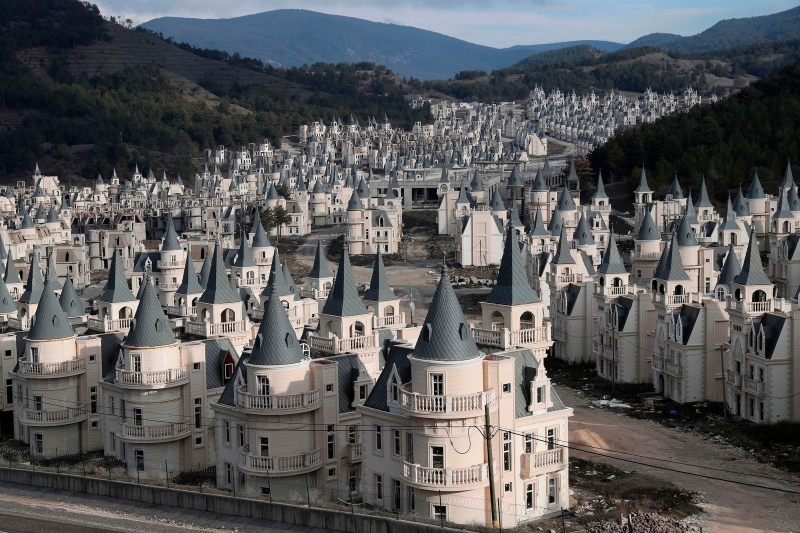 Burj al-Babas consists of 700 multi-level castles, half of which were already sold in 2019. After the infamous world events, the Turkish economy was shaken, and the fate of the new complex became uncertain.Photo: Getty Images

In the end, it makes sense: rich foreigners interested in the south of France or the northeastern edge of Spain could enjoy the Mediterranean climate on the terrace of a Gothic building overlooking the rich Turkish forests. 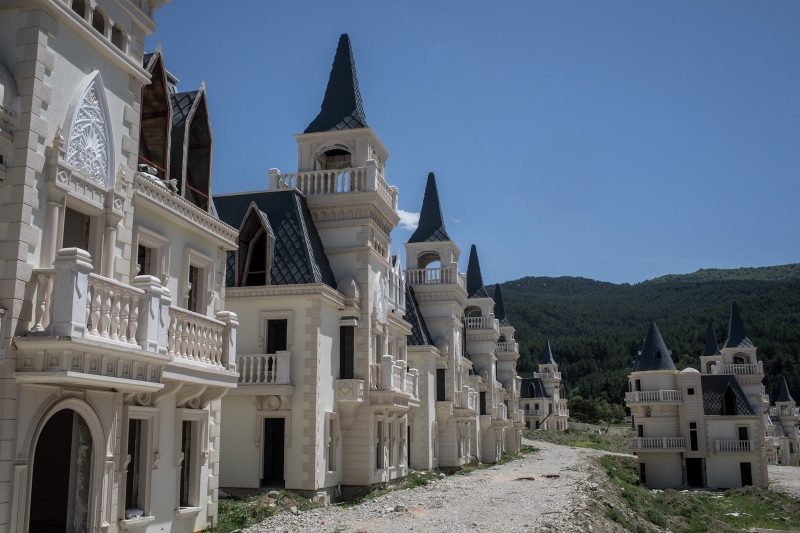 Almost identical castles in Gothic style, with archbuttons, arches and rib vaults are lined up in orderly rows along the road near the Roman spa town of Mudurnu. None of the planned gardens were ever realized, so the landscape looks abandoned.Photo: Getty Images/Chris McGrath

It is important to note that the developers (Sarot Group, which the brothers own together with their partner Ticket Yilmaz) have perfectly chosen a place for their kingdom: in the Roman spa town of Mudurnu, which is loved and appreciated for its hot springs and healing waters. Each villa would be equipped with underfloor heating and a Jacuzzi on each floor. These are details that were designed to consolidate the feeling of European luxury in the Middle East. 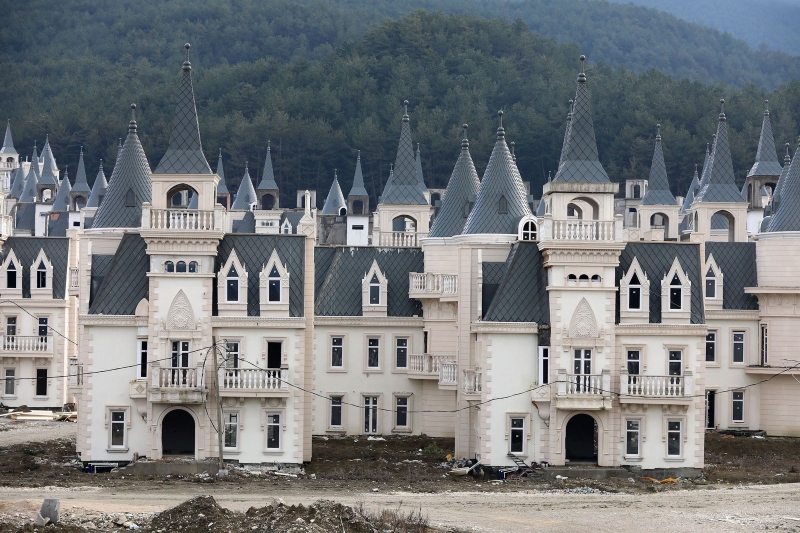 The developers chose a large plain near the northeastern mountains of Turkey to attract Arab visitors from the Gulf countries. There are amazing views from each castle.Photo: Getty Images/Adem Altan

Due to the political upheaval, terrorist attacks and, of course, the pandemic, the Turkish economy stalled, and developers were forced to declare bankruptcy. Moreover, investors and buyers withdrew $200 million invested in the project, which, of course, did not help Sarot Group to stay afloat. So the territory already marked out for construction turned into the edge of unfinished empty houses. 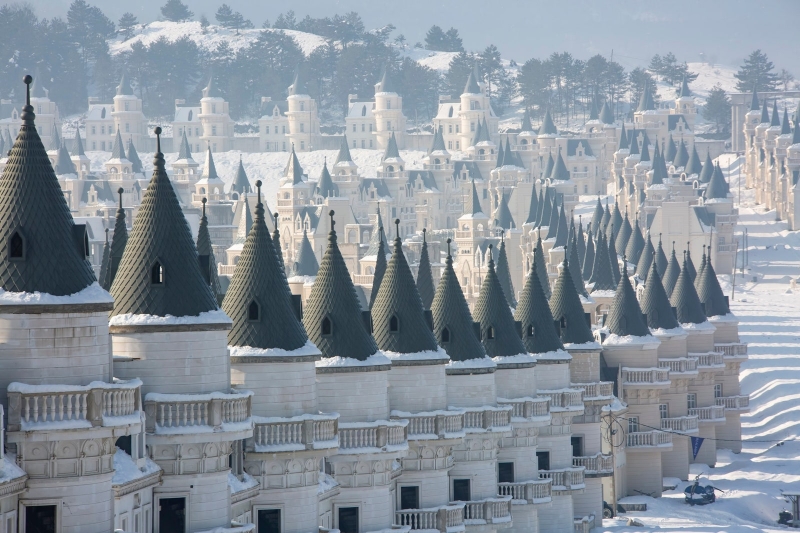 From a distance, the gray roofs of the complex make it look like a shot from a Disney cartoon — maybe «Beauty and the Beast». But on closer inspection, Burj al-Babas rather resembles the consequences of the apocalypse, in which there is absolutely no life. The sight of an empty complex of buildings is alarming — as if the whole city was suddenly destroyed by war. 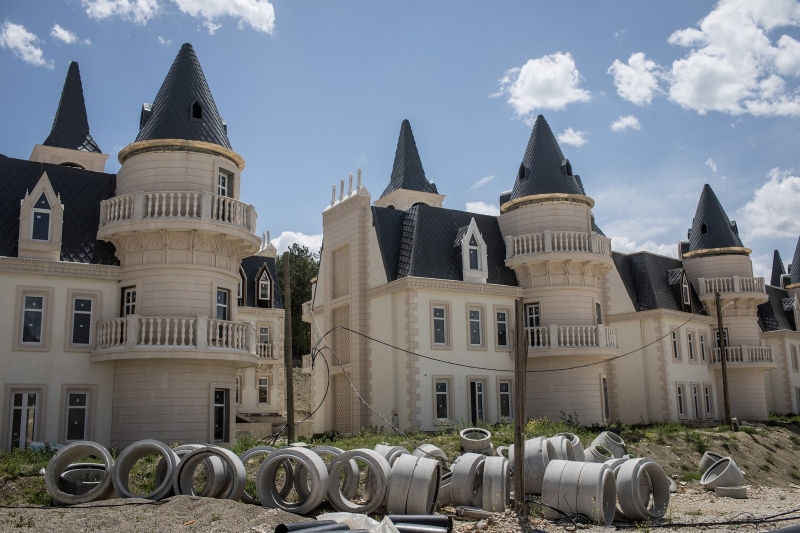 What was supposed to be a Europe-inspired corner in the Middle East is now littered with construction materials and turned into a ghost town.Photo: Getty Images/Chris McGrath