On February 20, Louis Kahn was born — a legendary modernist, one of the most prominent and influential architects of the XX century. His works are monumental, and the play with light is surprisingly subtle and elegant. We talk about the difficult fate and the best projects of the master. 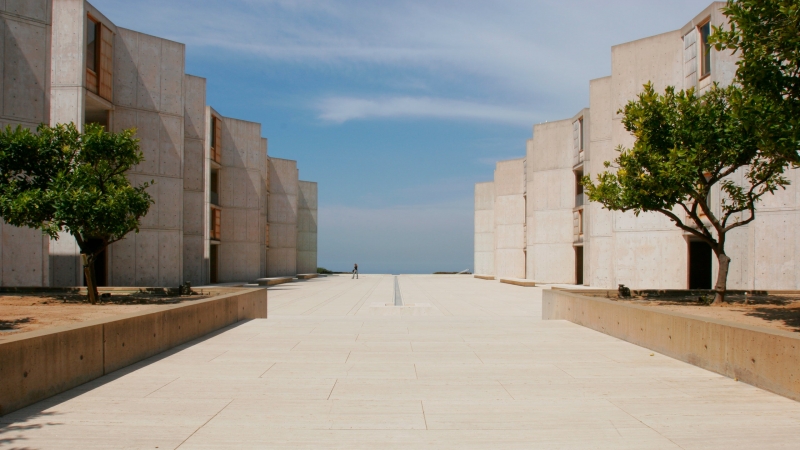 Louis Isidore Kahn (real name — Itze-Leib Shmuylovsky) was born into a poor family in the Russian Empire (now it is the territory of Estonia). When Louis was five, his parents emigrated to Philadelphia and took the American surname Kahn. 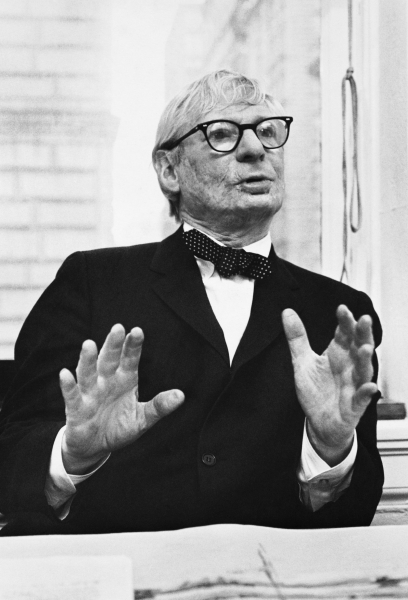 Since childhood, he was interested in drawing, but the family was so poor that they could not afford to buy materials for creativity. Therefore, the boy improvised, using burnt branches and matches instead of pencils. When Louis was three, he looked at the embers in the stove, and then decided to put them in his apron, but it caught fire and left scars on his face for life. By the way, being already a famous architect, Kahn continued to paint with charcoal.

In public school, Louis excelled, because of his talents and high intelligence, he was often sent to competitions for gifted students. At the age of 14, he began working as a piano player, accompanying silent films in cinemas by playing the piano. Earnings allowed the family to stay afloat and helped pay for an architecture course at the University of Pennsylvania. He could have studied for free, since he won a scholarship to the Pennsylvania Academy of Fine Arts, but chose to work at several jobs at the same time in order to get the education he really needed. 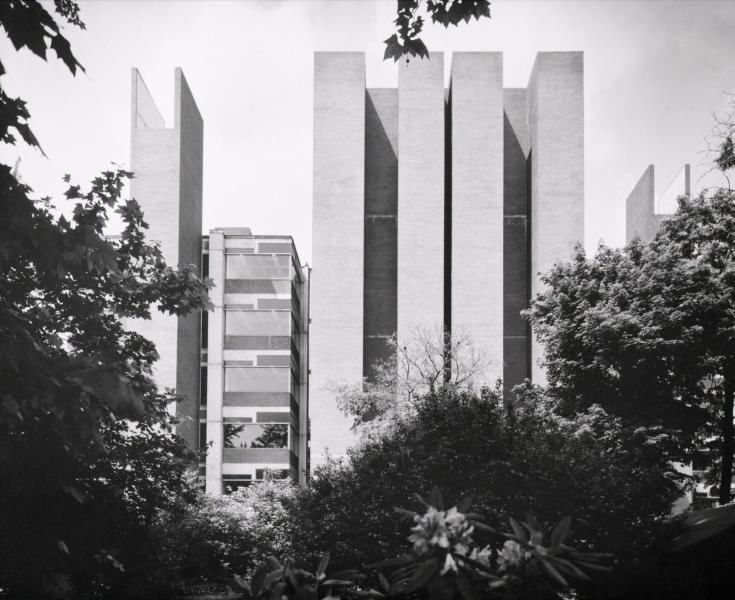 One of Kahn’s teachers was the French architect Paul Philippe Cret, who practiced a kind of classical modernism, in which he emphasized restraint and conciseness. He had a strong influence on Louis, and after studying they worked together on one of Creta’s most famous projects — the Folger Shakespeare Library in Washington.

But fame did not come to Kang immediately: he worked as an assistant to architects, occasionally carried out independent projects. Development was slow, as the Great Depression reigned in the country. American architecture was in decline, and he turned to the experience of European avant-gardists Le Corbusier and Mies van der Rohe, whom he met during a trip to Europe in 1928-1929. 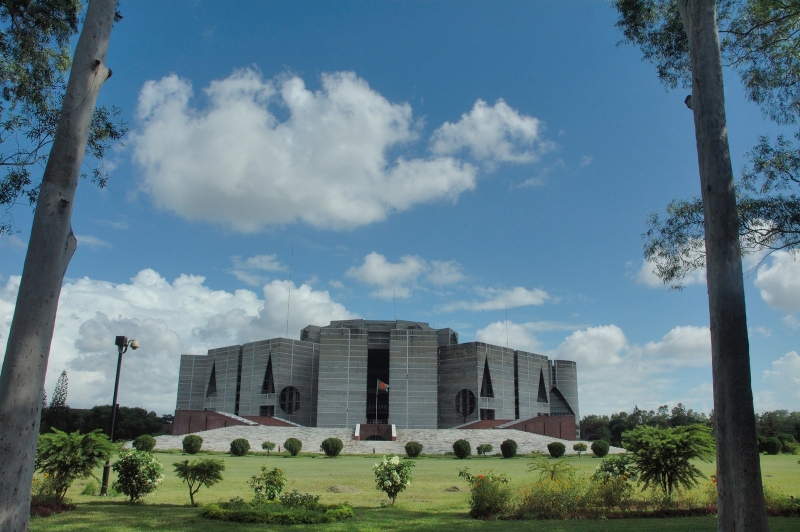 Kang founded his own studio quite late — at the age of 36. The unknown architect had few orders: he mainly designed inexpensive public housing. But even these modest projects Louis perceived as a chance to participate in the revival of the city and explore the relationship between architecture and urban planning.

Ten years later, in 1947, Kahn became a professor of architecture at Yale University, but still did not gain fame. In 1950, he went on an internship at the American Academy in Rome. Mediterranean architecture made a strong impression on him, and his own philosophy began to form under its influence. Kahn was struck by the ancient ruins and how beautifully the light plays on the majestic forms. 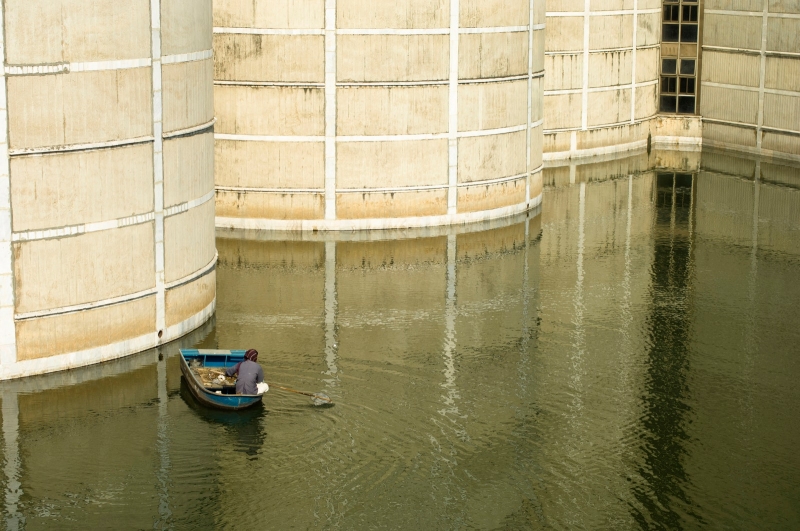 After that, Louis Kahn had a sharp turn in his work. And in 1951, he completed the first significant project — the Yale University Art Gallery. The building became revolutionary from the point of view of American museum architecture. It stood in the middle of Gothic buildings, but stood out strongly against their background: the structure of brick, concrete, steel and glass had open interiors with flexibly divided galleries. This project revealed the first features of Kahn’s style: the juxtaposition of emptiness and mass, a masterful play with light. 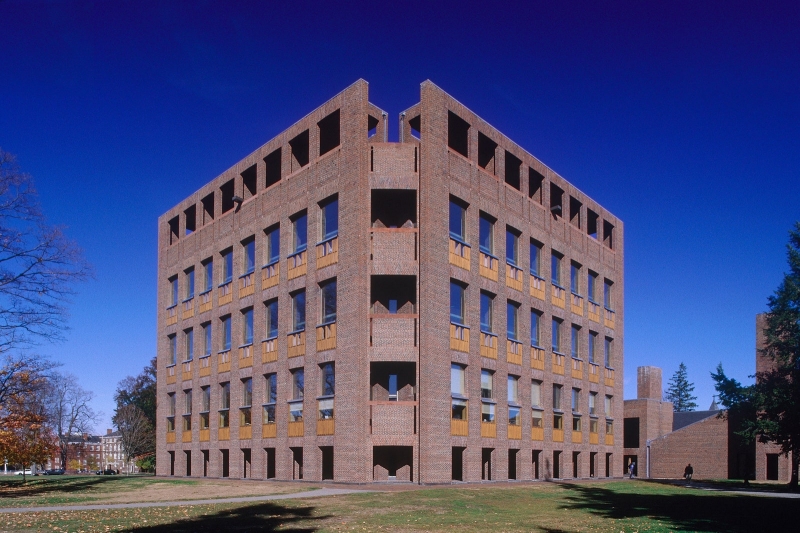 After this project, Luis finally received recognition and, most importantly, new orders. In the next few years, he almost simultaneously designed and built several large facilities: the government complex in Dhaka, the Congress Palace in Venice, the Institute of Management in Ahmedabad, the Salk Biological Institute in San Diego, and others.

In these works, he increasingly moves away from the international style inspired by the work of Le Corbusier, Frank Lloyd Wright and Ludwig Mies Van der Rohe, developing his own vision. There is more symbolism, complex design solutions and “air” in buildings. His main task is to move away from utilitarian practical forms to an elevated space. That is why many buildings of Kana are called «temples». 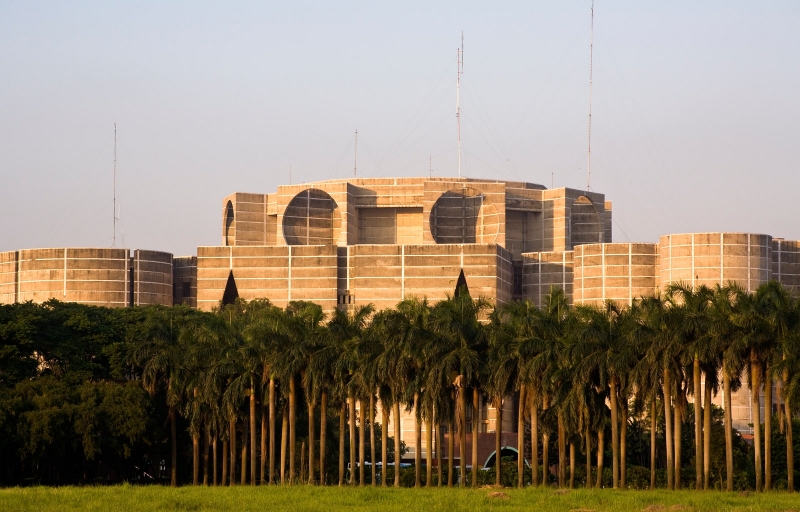 For many years, Kahn taught at the Yale School of Architecture, was a visiting lecturer at Princeton University and a professor at the University of Pennsylvania School of Design, where he lectured until his death in 1974. Among his students were Renzo Piano, who worked at the beginning of his career in his workshop, Muzharul Islam, Moshe Safdi, Robert Venturi, Jack Diamond and Charles Dagit.

The best works of Louis Kahn

The building that brought Kang national recognition was designed to reflect light differently during the day. The structure consisted of massive brick walls and glass, and air ducts and lighting devices were integrated into the ceiling in the form of honeycombs. Despite its revolutionary appearance, the building subtly echoed its Gothic “neighbors”. 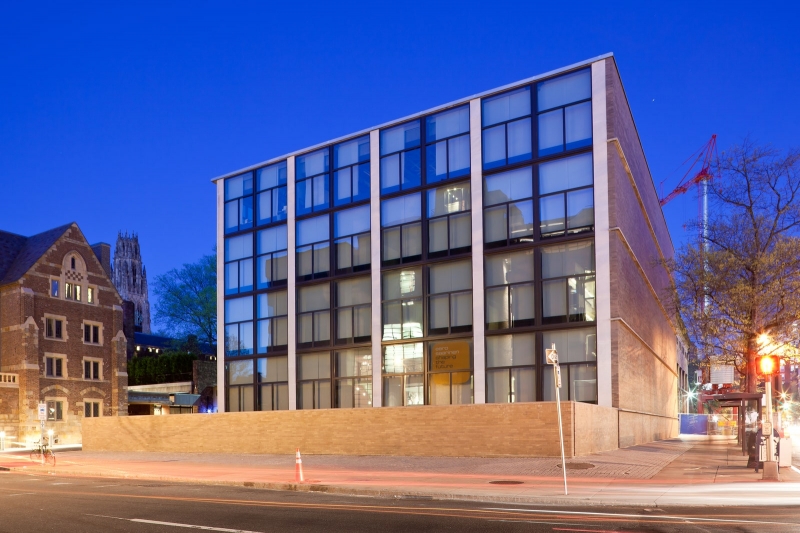 The main building of the Republic of Bangladesh looks like a standard brutalist structure, but in fact every detail reflects the local culture and corresponds to the architectural style of the surrounding buildings. Louis Kahn also took into account the desert climate and designed the building in such a way as to let in the natural coolness as much as possible. 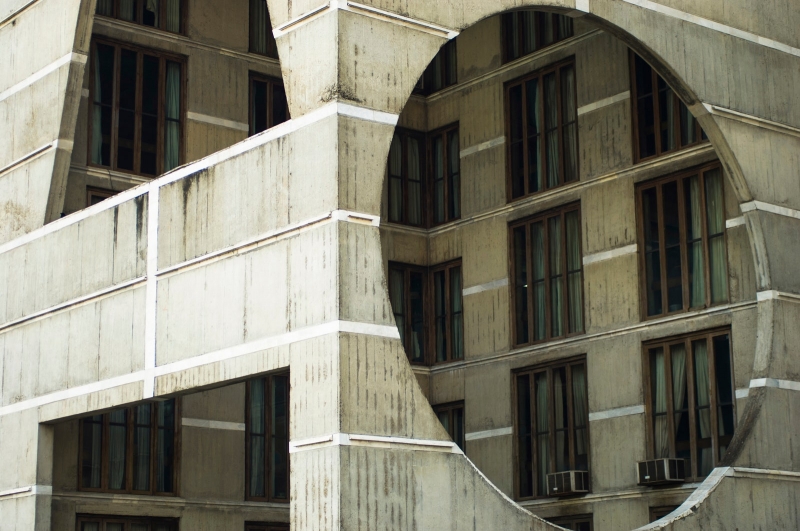 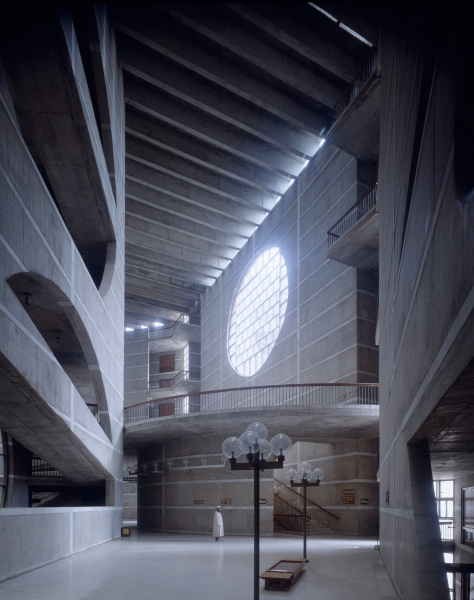 Kahn designed this building for an independent non-profit institute founded in 1960 by Jonas Salk, a scientist who developed one of the first polio vaccines. The construction brought Louis world fame: he divided the strict monumental building into two halves, and let a stream of water flow between them. The harmony of landscape and architectural symmetry created a sublime atmosphere in the campus and made it look like a temple complex. 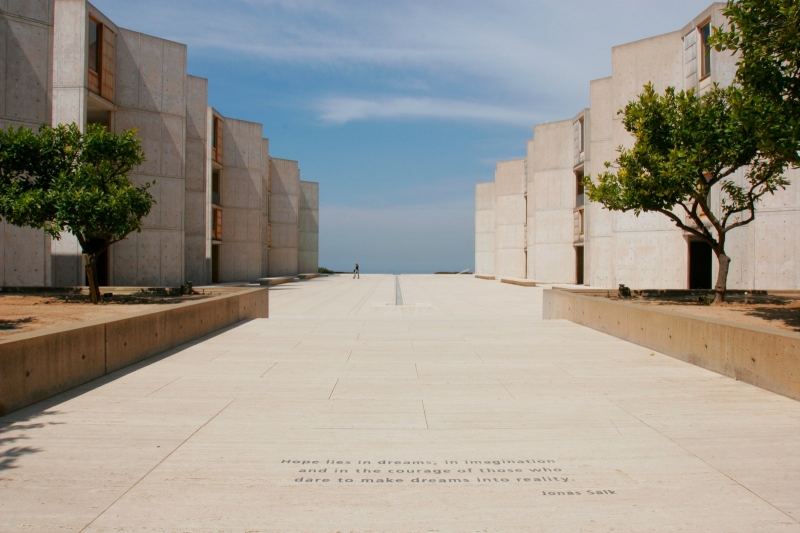 The main thing in this museum is light. The building is a series of barrel-shaped structures with circular arches and skylights on the ceiling. The direct rays of the sun were scattered by special aluminum reflectors, protecting the works of art. By the way, the arches and vaults refer to Roman architecture, which influenced Kahn’s work so much. 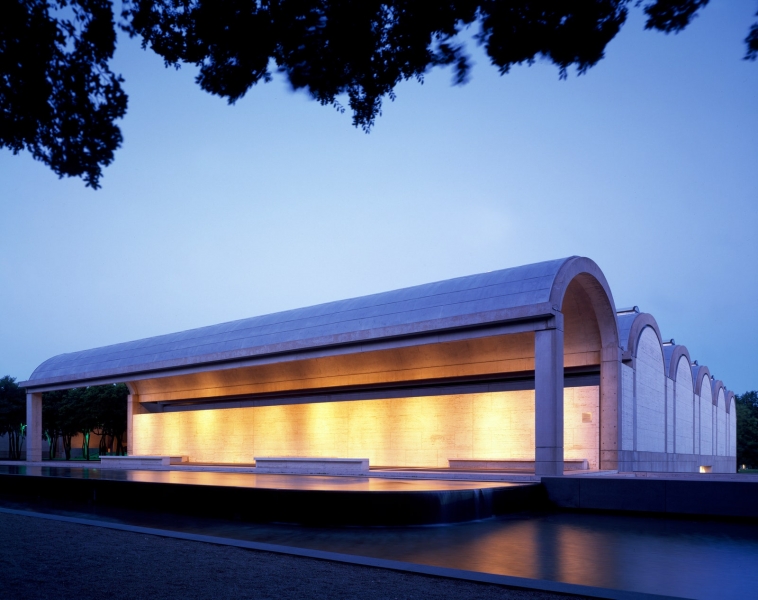 — In 2003, Kahn’s son Nathaniel released a documentary about his father called «My Architect: A Son’s Journey.» It was nominated for an Oscar as «Best Documentary”.

— Louis Kahn could design buildings for years, he thought everything through so carefully. But his longest project was the National Assembly Complex in Dhaka, which he spent almost 20 years creating.

— In America, there is an annual award, The Twenty-five Year Award, which is awarded to buildings and architectural solutions that have stood the test of time (at least 25 years) and have not lost relevance. Louis Kahn’s works have been awarded this award five times.

Expansion of the Kuppersmule Museum by Herzog & de Meuron