The architectural workshop “Arkanika» transformed the center of Almetyevsk. The team reconstructed the headquarters of Tatneft, transformed an outdated department store into a community center and connected the buildings with a new park. 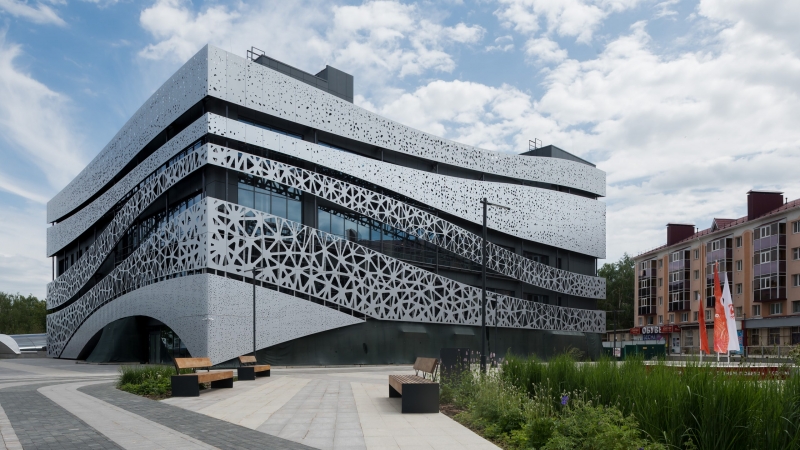 Almetyevsk is an industrial monotown formed during the Soviet era. “When we first saw the territory, there was an open car park on the site of the park, and the building that became a public center was a Soviet department store that completely lost its original appearance due to chaotic extensions”» says the head of the Arkanika workshop Nikita Vykhodtsev. 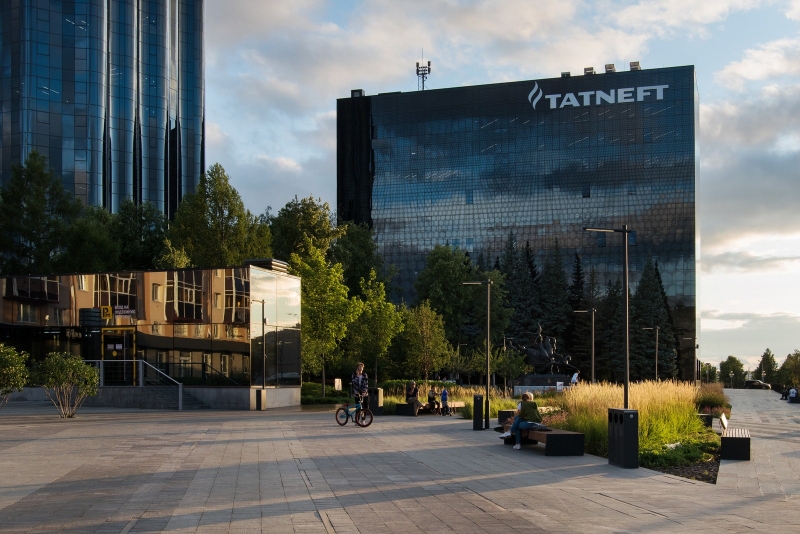 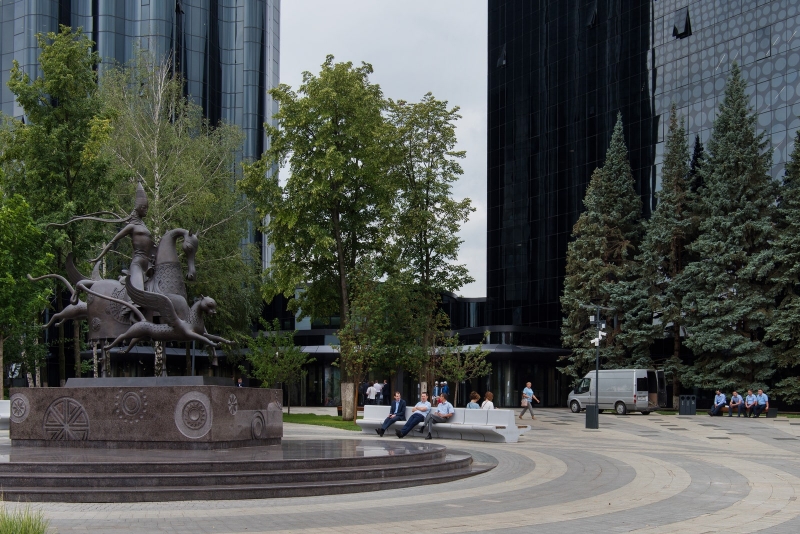 As in many small cities of Russia, there were no modern public spaces, Soviet buildings were in a neglected state, and the infrastructure was not thought out at all. But the city-forming enterprise Tatneft decided to invest in the environment and the quality of life of its employees and set the task to organize the territory so that it meets the modern demand of citizens and remains relevant for a long time. 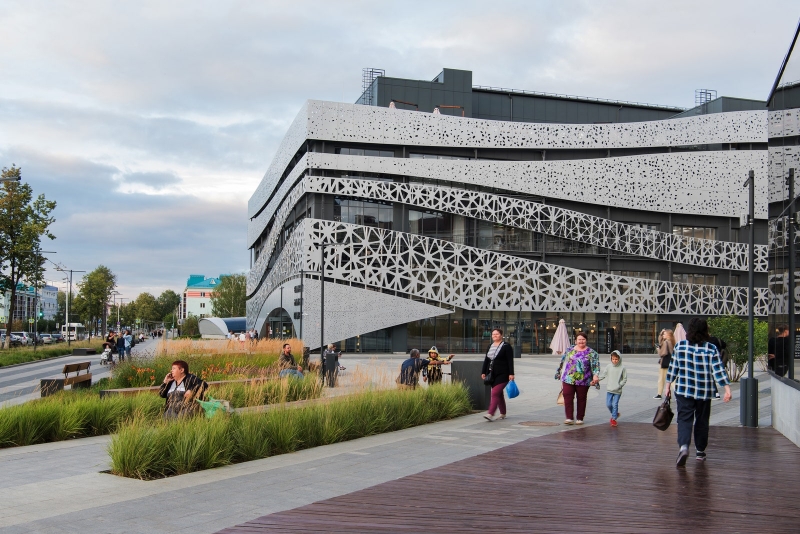 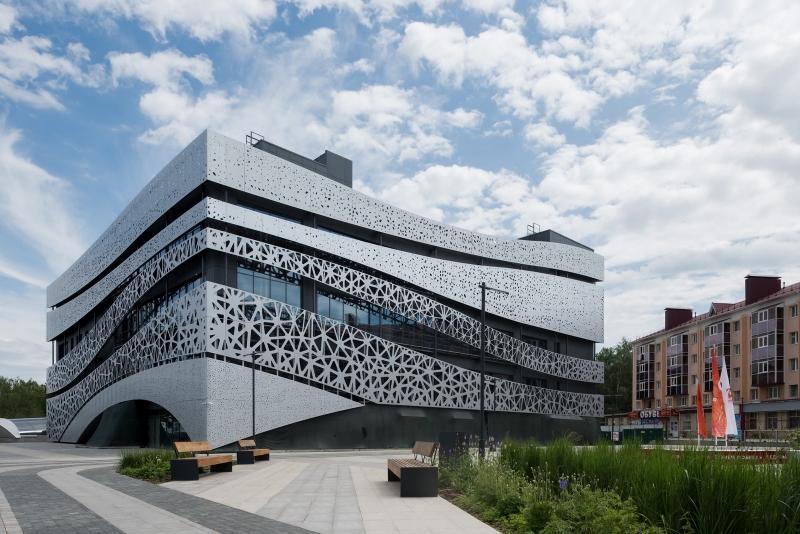 The Arkanika workshop offered to develop a master plan of Almetyevsk right away, as well as to determine the key stages of renovation of existing buildings. But such a scale and duration of the project confused, so it was decided to start small. The architects renovated one of the company’s headquarters, then rebuilt a 1970s department store and connected them with a public park. By the way, it was designed on the parking lot, which was removed underground. 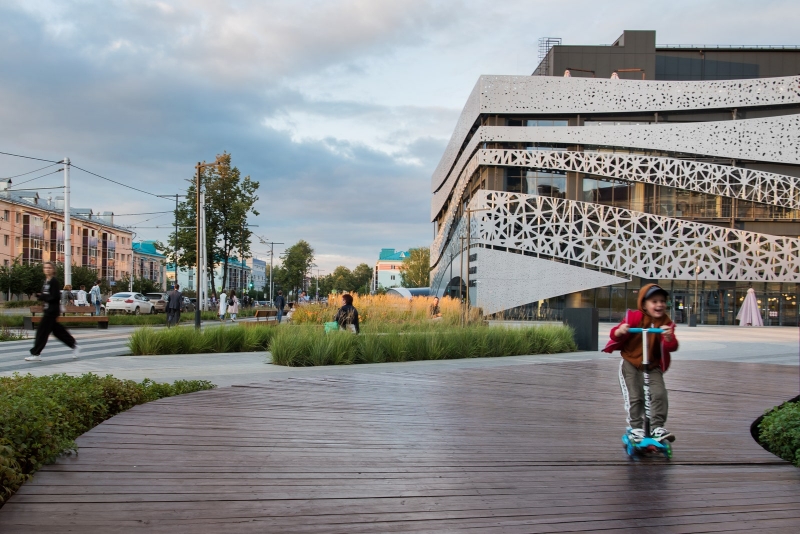 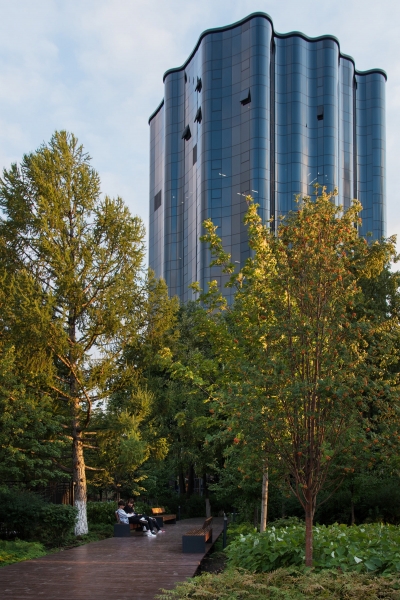 The first public center in the city is located in the building of the department store. “The format of the House of Culture has long lost its relevance, and there was no high-quality alternative. In cool weather (and most of the year the temperature outside is below zero), citizens spent time in shopping malls and food courts. We set ourselves the task of creating a place for all-season intellectual leisure for residents of all ages”» says Nikita Vykhodtsev. 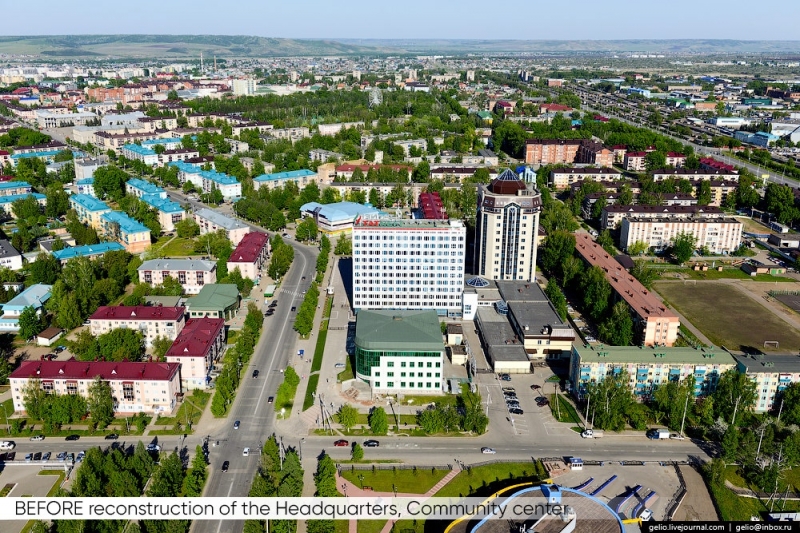 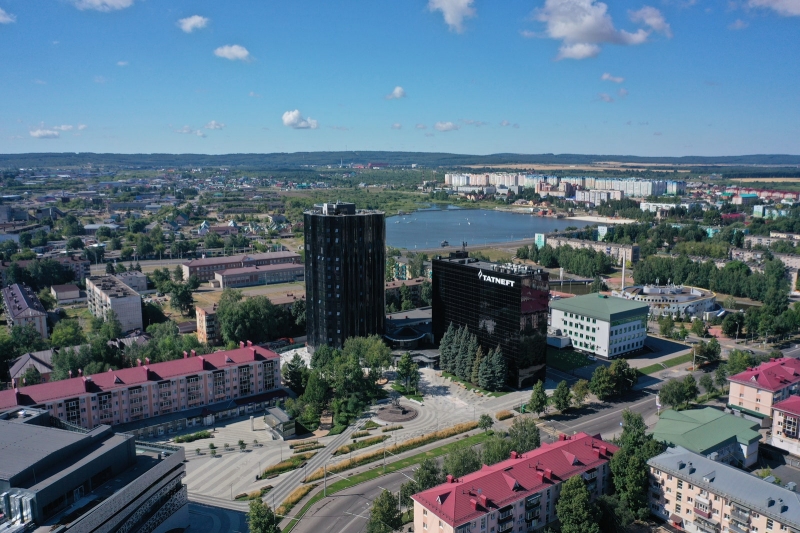 Modern cultural institutions are located on all floors of the center. On the first floor there is an exhibition space telling about the traditions of the Tatar people, geography, industry of the region and the achievements of the Tatneft company, as well as a cafe with access to the park. On the second floor there is a scientific and entertainment center with its own exhibition, on the third there is a linguistic center that accommodates 14 classes, a large lobby with a library and a computer area, as well as a universal assembly hall. In addition, the building has a separate auditorium with a telescopic podium, designed for 270 people and suitable for musical evenings, philharmonic concerts, theater performances and film screenings. After an active cultural holiday, you can have dinner on the roof — on the top floor there is a restaurant “Cheese Factory» (Novikov Group) with a seasonal veranda on the exploited roof. 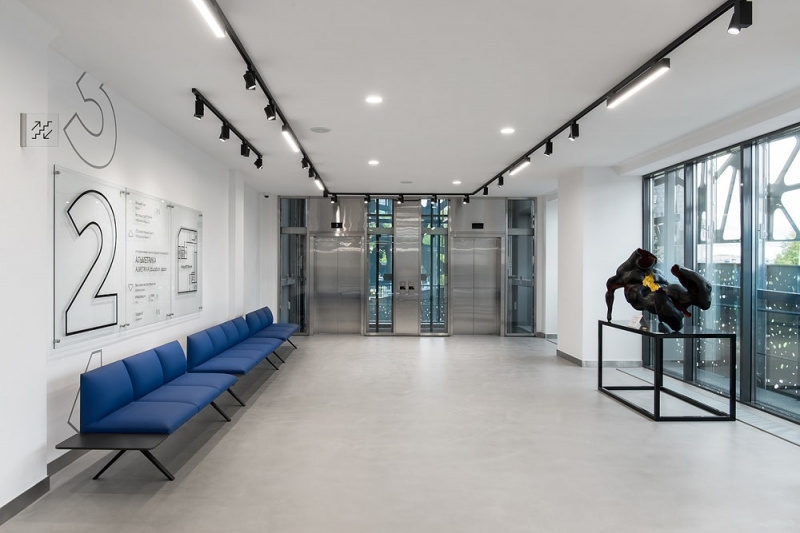 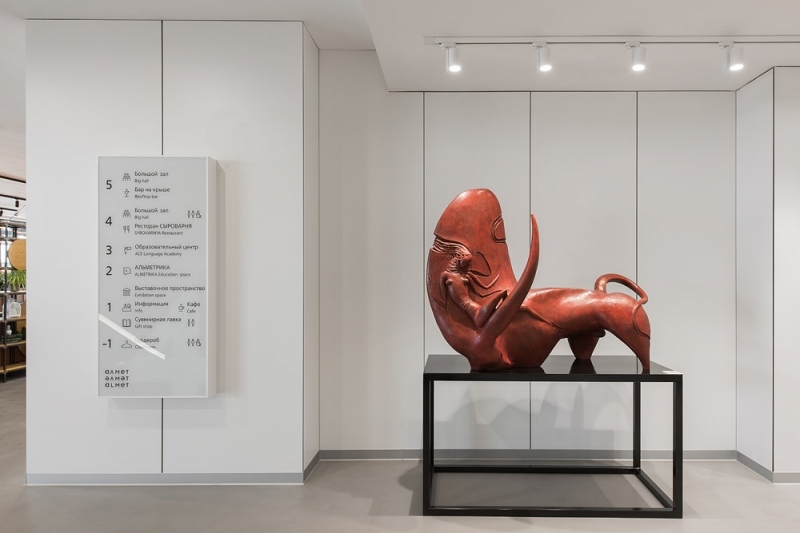 The space near the center has also changed a lot: it connected the reconstructed buildings of the quarter and became a new point of attraction in the city. In the center there is a sculptural composition «Karakuz» depicting the legendary warrior, and an ecotrope with a natural larch flooring combined the main entrance to the headquarters with an exit from the underground parking and the square in front of the public center building. 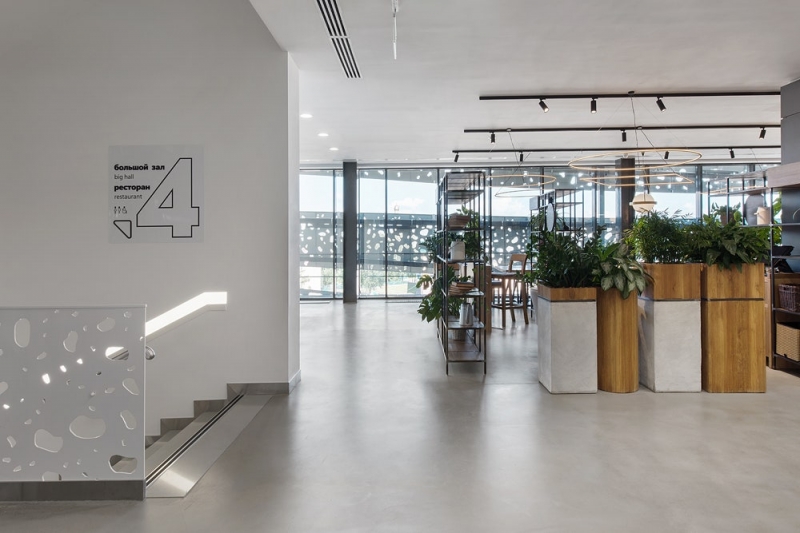 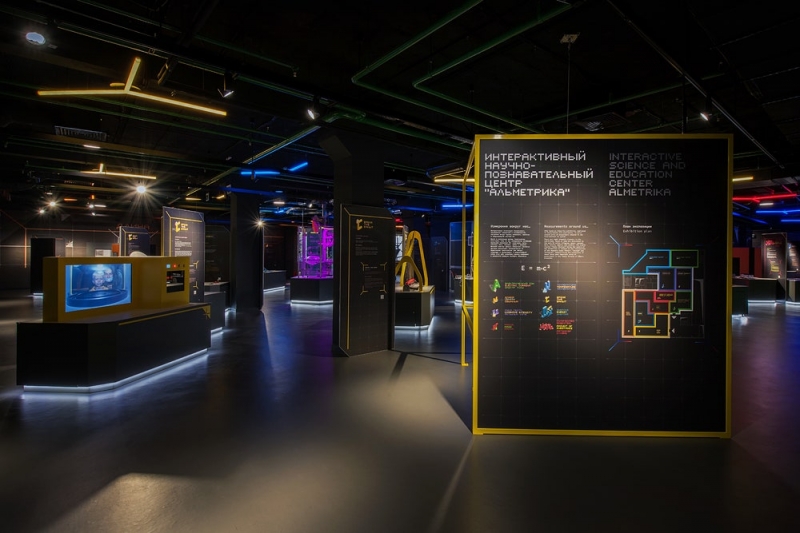 In addition, there is an open exhibition space — a system of adjacent sites where permanent and temporary exhibitions can be held, art installations can be placed. “This is the third theme park area, its landscape concept is based on the creation of an analogue of mixed floodplain forests of Tatarstan with raised densely planted hills through which paved pedestrian paths pass”» says the head of the workshop. 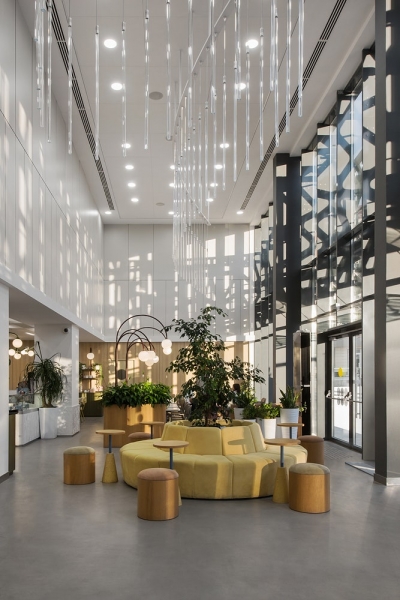 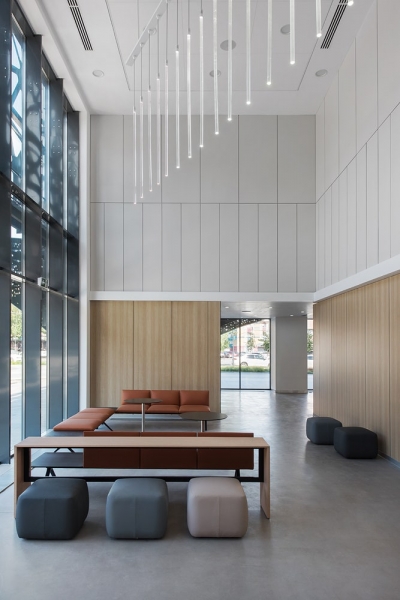 “No matter how pathetic it sounds, the most important thing for us is the social effect that the project has on the lives of citizens and the development of the city. It is important for us to create spaces that unite people, form and activate urban communities, and become the start for subsequent changes. For example, when we filmed the life of the quarter in the summer of 2021, we were very pleased with the number and variety of people who were here at different times of the day,» says Nikita. —This is what has become the greatest value for us — people associate this place with themselves, with their city and are proud of it.” 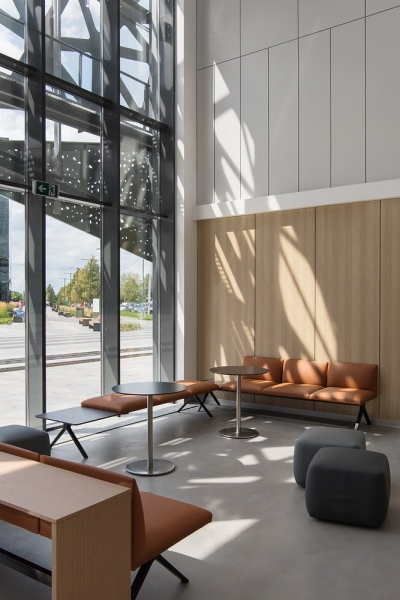