Osip Bove is one of those architects who shaped the image of Moscow, which we are used to seeing. Among his projects are the main attractions of the city: the Theater Square, the Alexander Garden with a grotto, the Triumphal Gate and others. We recall the life story and the main works of the architect. Circa 1850. Bolshoi Theater on Theater Square in Moscow.Photo: Getty Images

On November 4, Osip Bove was born, who is known for restoring the appearance of Moscow after the war with Napoleon and the fire of 1812. It was he who built up many streets, erected iconic structures, and also filled up the Aleviz moat around the Kremlin. But let’s start with the origins.

Osip Bove is not an invited architect from Italy, but a native of St. Petersburg. His father Vincenzo Giovanni Bova (Bove) moved here in 1782 to work at the Hermitage. Osip was the firstborn in a family of artists and initially received the name Giuseppe, which was later changed into Osip Ivanovich in the Russian manner.

Almost immediately after Bove’s birth, they moved to Moscow, so Osip’s childhood and adolescence were spent here, in a city that will soon change greatly under his influence. He received his education at an architectural school, and then worked as an architect for the Kremlin expedition under the leadership of Matvey Kazakov and Karl Rossi. According to their projects, Beauvais was engaged in the improvement of Moscow, but not for long — the war with Napoleon began, and the young architect went to fight in the militia. 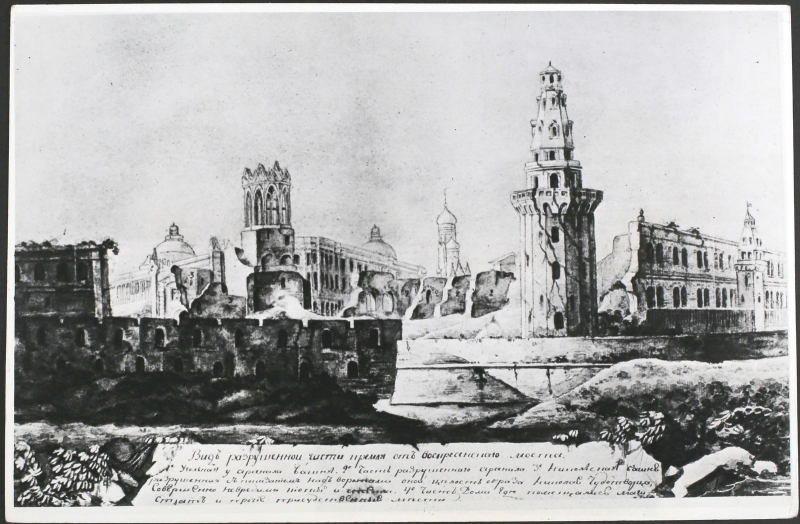 The destroyed Nikolskaya Tower and the Arsenal in the Kremlin after the war of 1812.Photo: Getty Images

In 1813, Osip returned to service, but the city was in ruins after the fire. To restore it, Alexander I established a Commission on the structure of Moscow. Fedor Rostopchin was put in charge, Osip Bove was responsible for the architectural department, Egor Cheliev was responsible for the engineering department. Osip also supervised the restoration of the central section and worked on the Tver, Arbat, Presnenskaya, Novinskaya and City parts.

In this post, Bove managed to change the appearance of the ancient capital with a new scope for Moscow. He reconstructed the Red Square, preserving the historical ensemble, but nevertheless filling up the Aleviz moat. It was no longer possible to defend the Kremlin with it anyway, so trees were planted in its place. 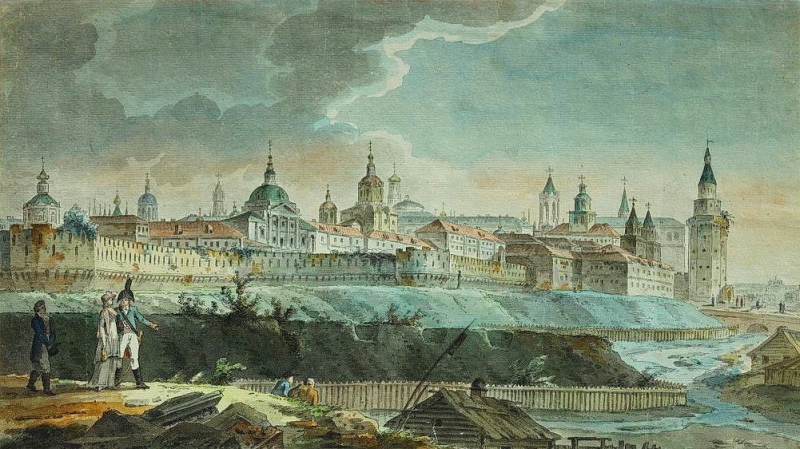 Osip Bove also connected Red Square with Kitay-Gorod, rebuilt the Classicism-style Shopping Malls opposite the Kremlin, on the site of which GUM now stands, smashed the Kremlin (Alexander) Garden, created the Theater Square, the Triumphal Gate and much more.

Until the XIX century, it was an area on the low bank of the Neglinnaya River, built up with private courtyards and baths. The courtyards of the Princes Lobanov-Rostov, Cherkassky, Prince Turkestanov were located here. But all these buildings burned down in a fire. Therefore, it was decided to organize a square in the vacant place. 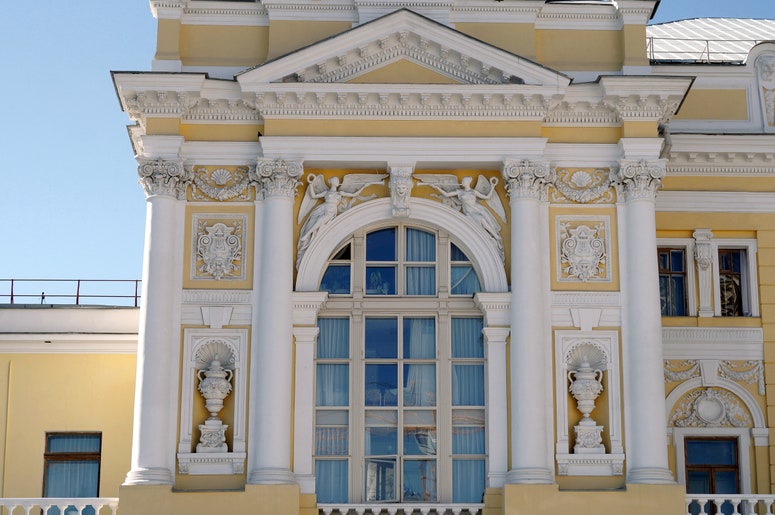 The central place was occupied by the huge building of the Petrovsky Theater, the facade facing the Kitaygorodskaya wall, on both sides of it there were four buildings that mirrored each other’s facades. The lower floor of the buildings was made in the form of repeating arcades. All facades were designed by Beauvais. However, today only one building has retained its original elements – this is the Maly Theater. 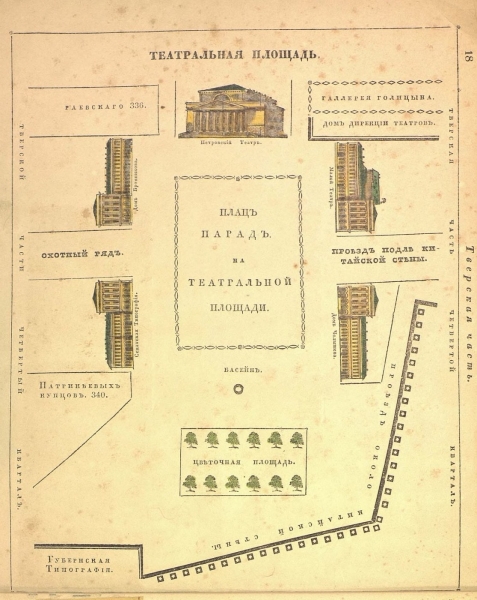 On the site of the Bolshoi Theater there used to be the Petrovsky Theater, named after Petrovka Street. The building belonged to entrepreneur Michael Maddox and was built under his supervision by architect Christian Rosberg in 1776-1789. The Maddox Theater stood for 25 years — on October 8, 1805, the building burned down.  And after the war, the Commission on the Structure of Moscow announced a competition for the construction of a new building, a prerequisite for which was the inclusion in the construction of the burnt wall of the Maddox Theater. The project of Professor Mikhailov of the Imperial Academy of Arts was recognized as the winner, but later it turned out to be too expensive and excessively large, so Bove was entrusted with the processing of the project. He completely preserved the basics of the composition, but significantly changed the proportions of the building, reducing its height from 41 to 37 meters, and also made significant adjustments to its exterior and interior decoration. 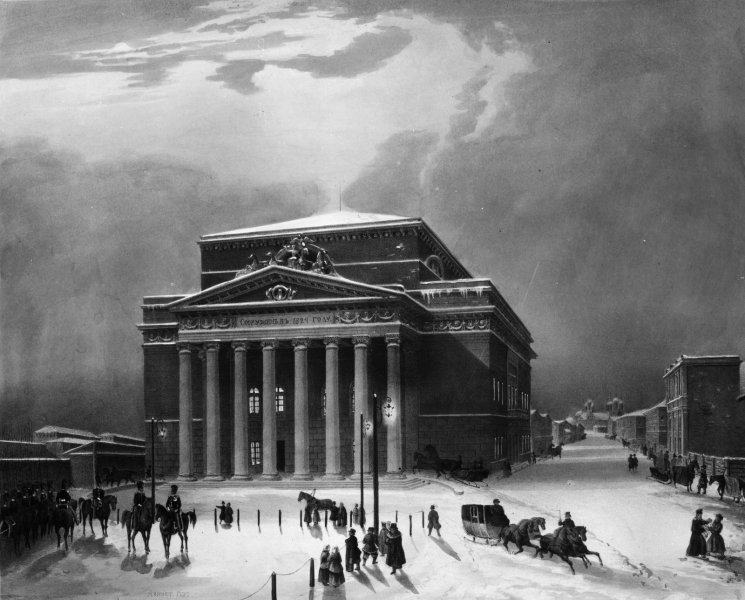 Until the XVIII century, the Neglinnaya River flowed on the site of the Alexander Garden. Over time, it became polluted, and the coast collapsed and overgrown. Therefore, after the end of the Patriotic War, Emperor Alexander I decided to remove the river underground, enclosing it in a pipe three kilometers long. In the vacant place, it was decided to lay out a garden, the project of which was developed by Osip Bove. It had a memorial significance — it was created in honor of the victory in the Patriotic War, but it was also intended for festivities. 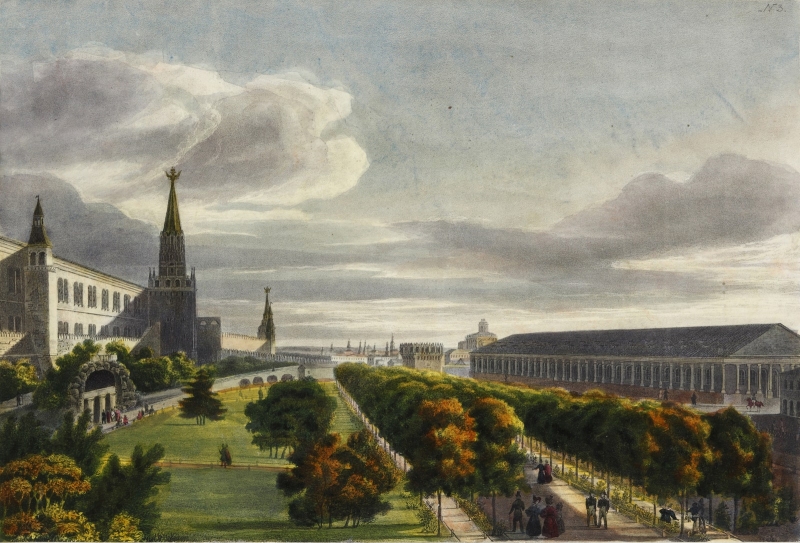 The gardens were built from 1819 to 1823 and were originally called the Kremlin Gardens. In 1820-1821, Beauvais designed part of the garden from the Resurrection to the Trinity Gate — the Upper Garden, and his work was continued by assistants Davydov, Petrov and others. The terrain here was leveled and covered with turf, lime trees, birches, mountain ash and other trees and shrubs were planted. Cast-iron gates depicting the symbols of victory in the Patriotic War, made by architect Eugene Pascal, were installed at the main entrance.

Italian grotto in the Alexander Garden

In 1820, in the center of the Upper Garden, Beauvais erected a grotto “Ruins”, which is also called “Italian”. It is a semicircular arch made of black granite and red brick, inside which a marble gate with four massive columns is installed. The grotto was built from Moscow houses destroyed by the French army and stone cores. 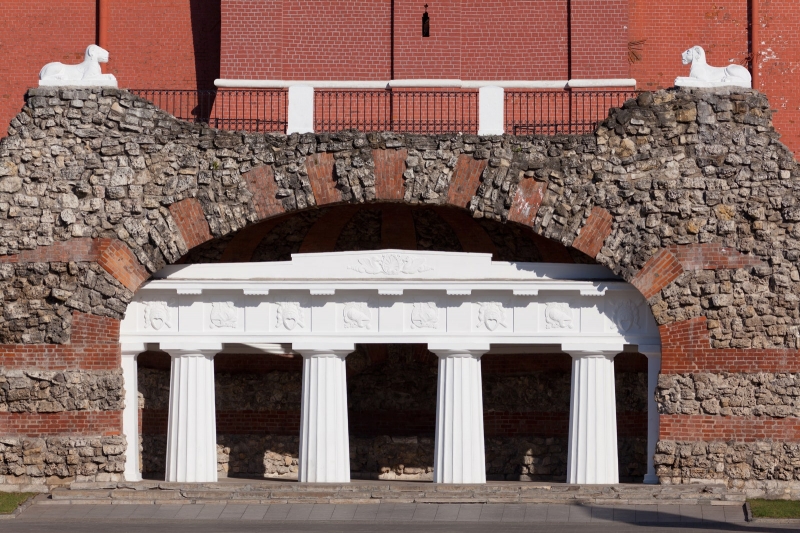 Osip Bove built the gates in 1834 on Tverskaya Zastava Square, they became the manifesto of Emperor Nicholas I. In 1936, due to the expansion of the transport highway, they were dismantled, a copy of the gate according to Libson’s project appeared only in 1968, but already on Kutuzovsky Prospekt. 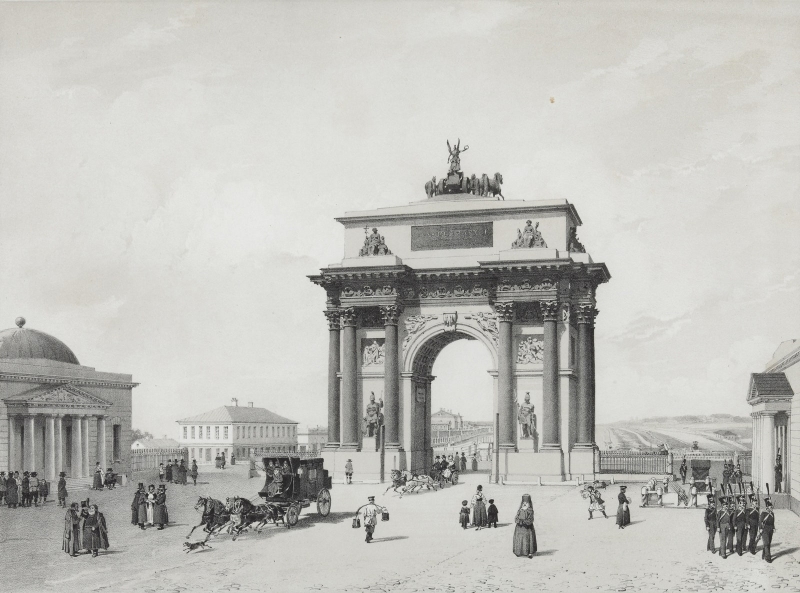 The foundation of the original gate was laid with a bronze mortgage plate and a handful of silver rubles minted in 1829. For the construction of the structure, a stone from a disassembled Gravity channel and a white stone from the village of Tatarovo were used — they lined the walls of the arch. And the columns and sculptures were cast from cast iron.

Inspiration for the Week: Sandcastles by artist Calvin Seibert