Nikolai Polissky is the first Russian artist who started working in the genre of land art. Olga Sorokina learned about what it’s like to be a pioneer. 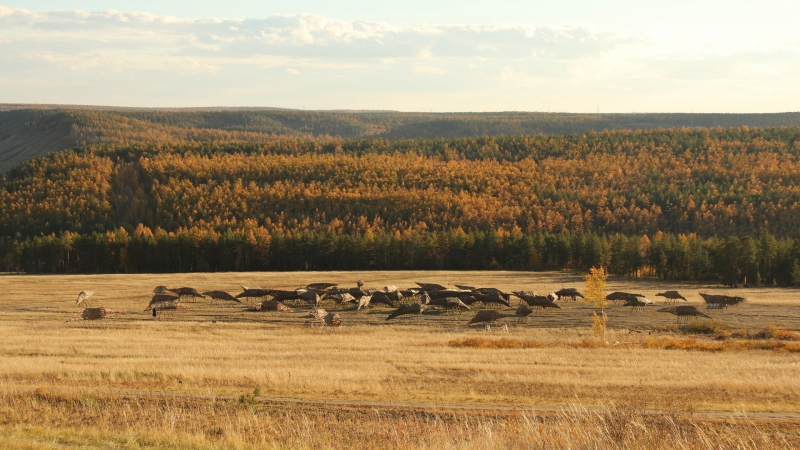 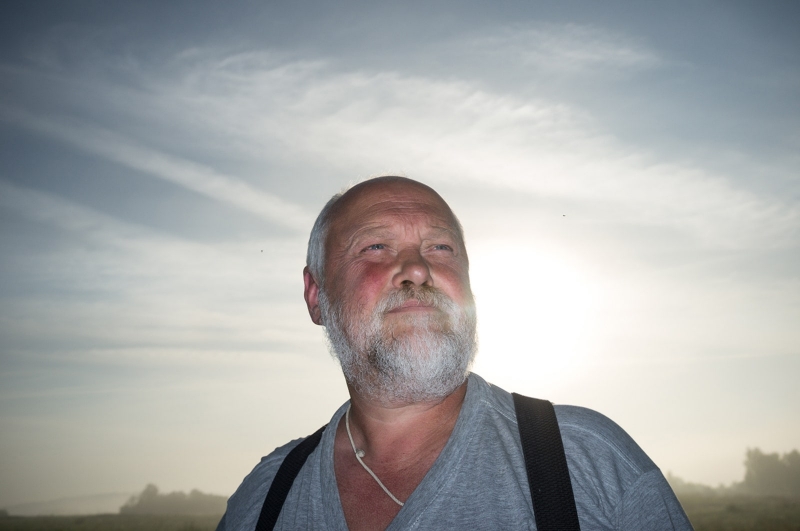 The artist Nikolai Polissky is 64 years old. He has been working in the new genre since 2000.

We met with Nikolai Polissky in the summer at the GUM-Red-Line gallery before the opening of his exhibition «Russian Antiquity». At the same time, another Polissky art object, a tall wooden “Column”, could be seen near the walls of GUM within the framework of the Red Garden project. The question of whether he ever thought that his creations would end up on Red Square was self-evident. ”In your youth, you will not choose the profession of an artist if you do not have a dream of becoming great,» Nikolai answers philosophically. 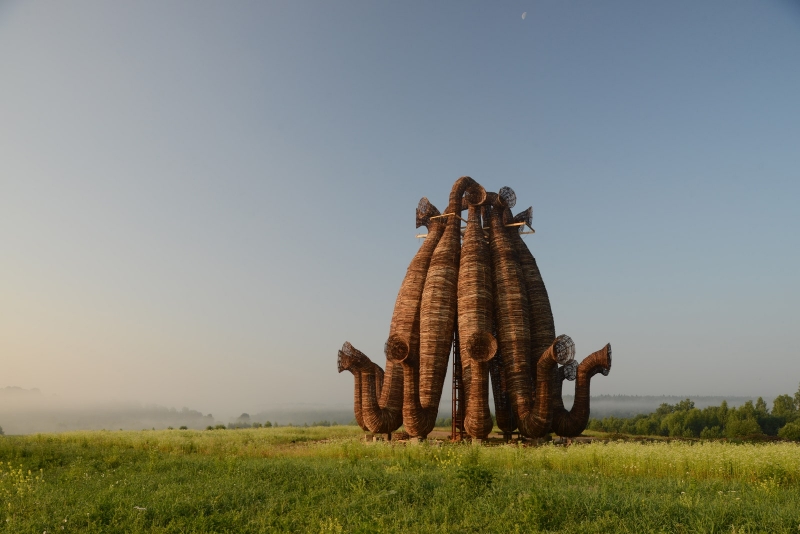 «Bobur», 2013. The pipes of this object resemble the ventilation flares on the facade of the Paris Pompidou Center, which is located in the Beaubourg district.

It is not easy to figure out whether Polissky dreamed of success or not. He is dressed modestly, has a perky blush on his cheeks, answers questions as if he is telling stories, and writes off all his achievements to a series of accidents. When in 1989 the artist decided to move from Moscow to Nikola-Lenivets, he did not count on anything, and his friends even laughed at him. “The children were young, and we were just looking for a place where it would be good to live, no one thought about art then,» says Nikolai. Nevertheless, now the festival «Archstoyanie», founded by him in 2006, and the village of Nikola-Lenivets in the Kaluga region are famous not only in Russia, but also beyond its borders. ”Everyone wants to prove themselves in Nikola-Lenivets, we have already become like an institution: both young and established artists dream of coming to us,» continues Nikolai. 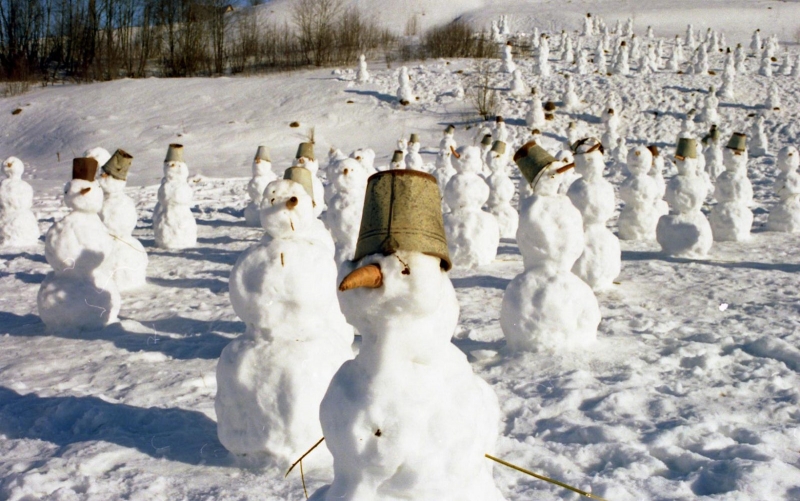 «Snowmen», 2000. The first project of Nikolai Polissky, which began his ”career» as a land art artist. 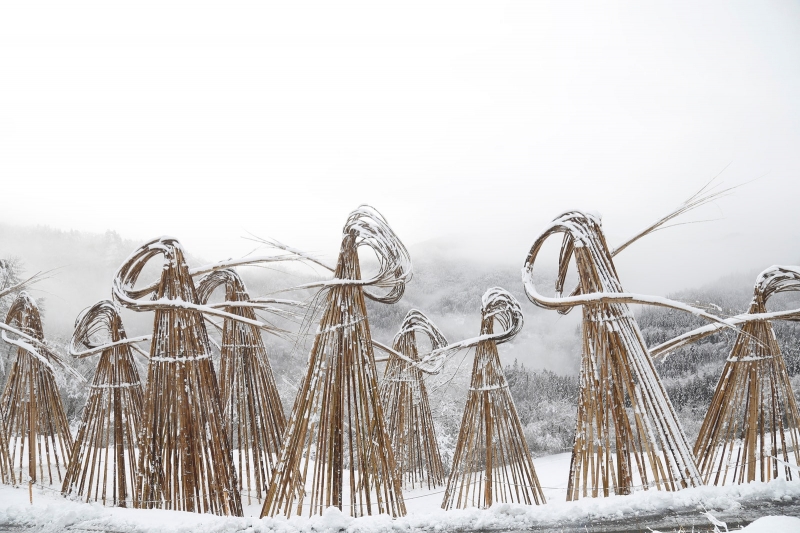 A new creative stage in Polissky’s life coincided with the millennium, so in all interviews he calls himself «an artist of the XXI century.» Nikolai graduated from the Mukhin College in St. Petersburg and was a member of the group «Mitki». But at the age of forty-two, he gave up painting and decided to do something completely different. The first was a project with snowmen: more than two hundred snow «men», made by local residents, appeared on a hill in Nikola-Lenivets. Since then, this has been the case: for work, the artist uses only free improvised material and the help of local people, considering all his co-authors. «Village — they are very cautious, suspicious, and you need to gain their respect, and this happens gradually. If I hadn’t lived in Nikola-Lenivets for several years before, they wouldn’t have helped me,» says Nikolai. ― I paid ten rubles for each snowman I made. Of course, at first people worked only for money, and then they got turned on, they got excited”» But the Ziggurat hay tower has already been built by the whole village. «There were about a hundred people,» Polissky recalls. ― On weekends, all the residents came and helped to stack. They treated this case like a picnic, and they were interested”» The Ziggurat hay Tower was erected in 2001 and became the first object to be burned in Nikola is a Sloth. This is how the tradition of burning art objects on Shrovetide was born. 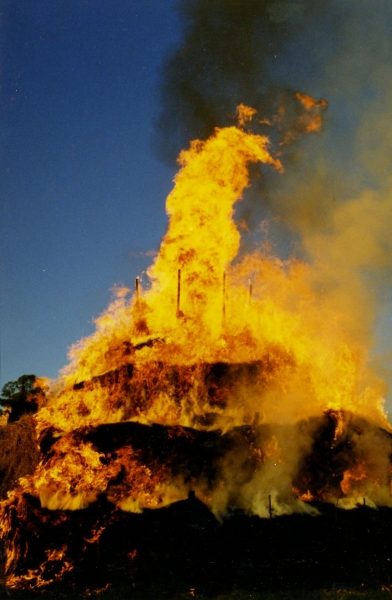 The Ziggurat hay Tower was erected in 2001 and became the first object to be burned in Nikola is a Sloth. This is how the tradition of burning art objects on Shrovetide was born.

Now local residents maintain order in the art park in Nikola-Lenivets, ensure its operation. Some have opened cafes, others hotels, and others help to build art objects and form the artel «Nikola-Lenivetsky crafts». To my question, does he understand how he helped the village, Nikolai answers like this: «Probably, if our company had not existed, and the village would no longer exist― everyone would have gone to the cities. And so — glory goes, people come, the locals understand what they are working for, and are proud of the result”» 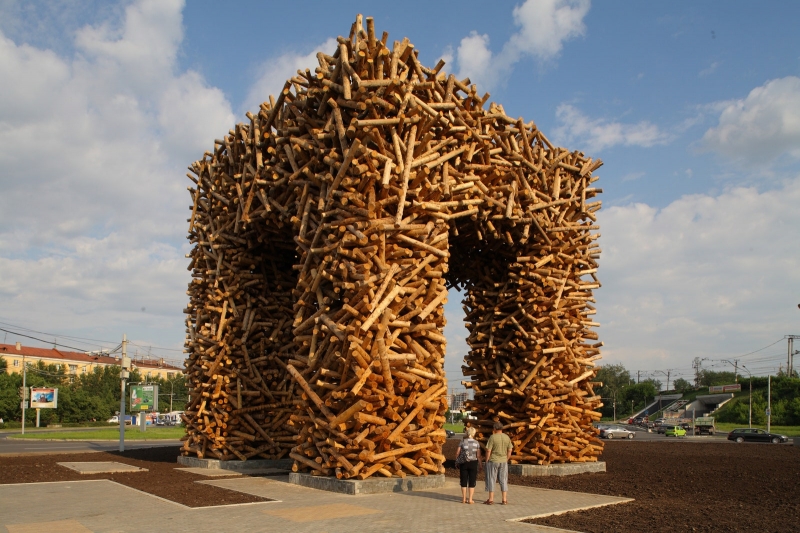 «Perm Gate», 2011. In this object in Perm, Nikolai Polissky plays the architectural form of the triumphal arch. 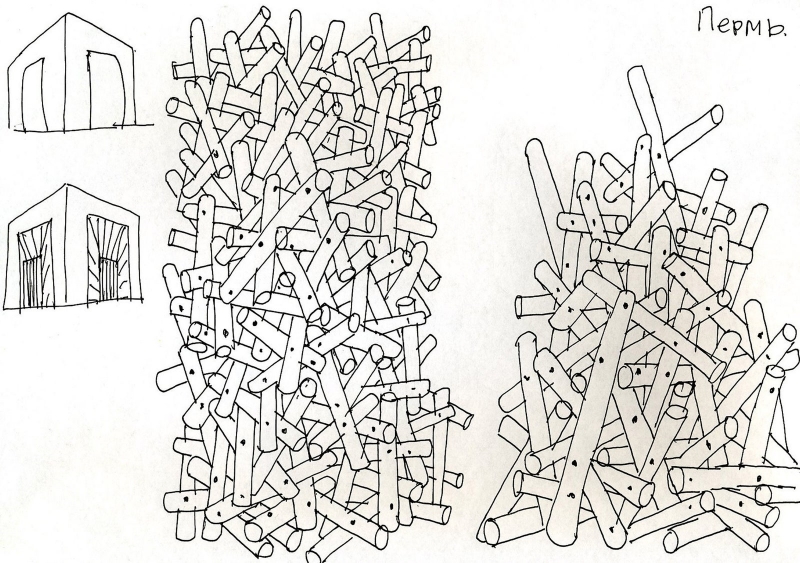 Nikolai Polissky is called the pioneer of Russian land art, but the artist himself believes that what he does has no name yet. «Land Art is indifferent to the audience, and the people’s path does not overgrow our objects, — he explains. ―When I started, I didn’t think about any particular direction, and I didn’t have any examples in front of my eyes.” However, Nikolai still has his own principles: his objects are always made of local natural materials and organically fit into the landscape, rather even «grow” out of it. According to the same rules, works are selected for «Archstoyanie»: Polissky will never take a project “with a name» if it does not fit or it is impossible for him to find a harmonious place. The environment or environment is of great importance to the artist. For example, before starting to make objects for the exhibition «Russian Antiquity”, he found out in which space they would be presented, and took into account the height of the ceilings and the area of the hall so that the sculptures looked harmonious. Since the columns in the gallery could not fit at full height, he decided to present them in the form of fragments, as if parts of destroyed antique columns were separate trunks and capitals. “For me, the space where the object will stand is important. I can’t put the same thing in different places, there must be relevance in everything.”, — explains Polisky. 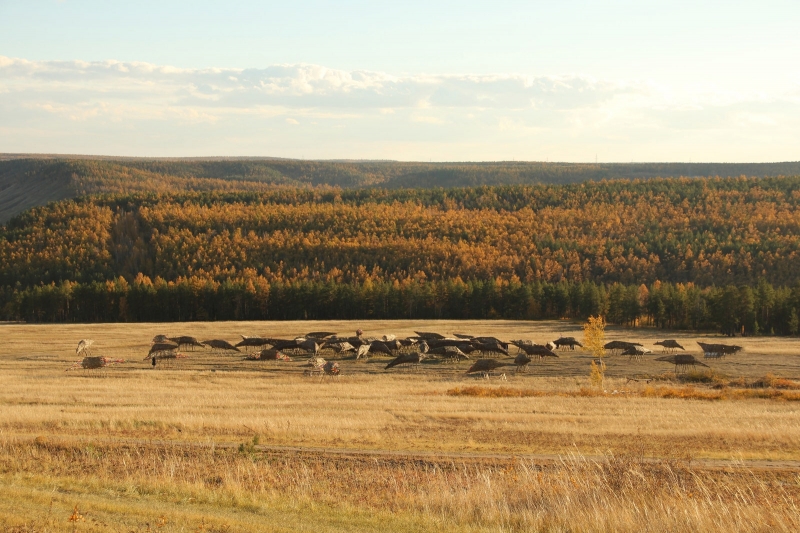 The «Sacred herd of Mythical horses» appeared in The Yakut region in 2018. The «Sacred herd of Mythical horses» appeared in The Yakut region in 2018.

He has been invited to other regions and countries more than once ― and the artist does not change himself there either. In Japan and Taiwan, Polissky worked with bamboo, in France he made objects from vines. His small team of Nikola-Lenivetsky craftsmen travels with him, but the main workforce is local residents. “Nothing will work without them. The objects are large, time is short, it is necessary to study the area and find out where to collect the material. In France, half the village did not help us. In Japan, there were elderly strong and very critical old men, but they also turned on―» says Nikolai. — In general, I am often called with this in mind, so that I involve the locals in the work. It happens that they are invited to some depressive areas so that my art attracts people there. Our country can also be cheered up with such actions, we have a lot of resources”» Polissky admits that, having switched from art painting to working with other materials, he did not study anything specifically, everything came with practice: he adopted the experience of people who already know how to work with this or that material― which is why he needs local residents to create projects. 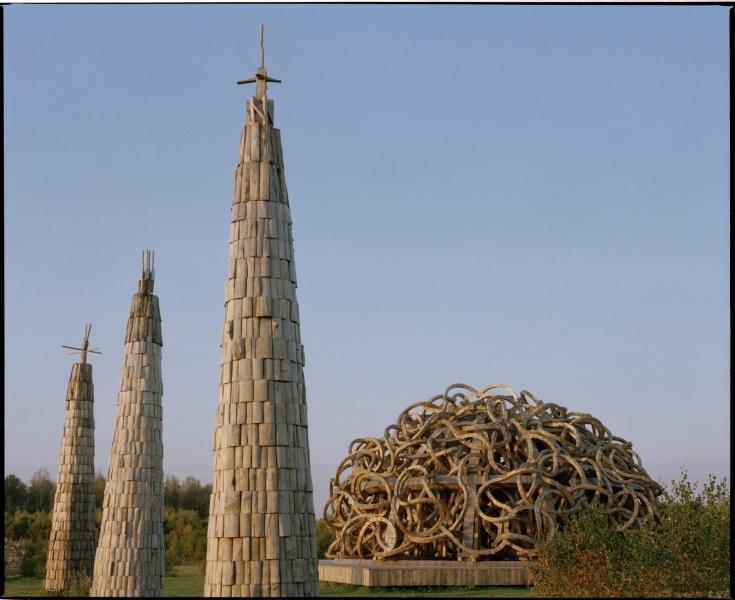 «Universal Mind», 2012. One of Polissky’s most ambitious projects is located in Nikola-Lenivets.

Perhaps the uniqueness of Nikolai Polissky is that he does not use the means of self-expression that are popular with his colleagues. “Even if I work with already familiar material, I try to change something in the approach to it, to find a highlight. An artist should see potential where no one sees it,» he says. All Polissky’s art objects are made of natural materials, and they are not eternal. «It is necessary to put aging and ruin into the project”» says Nikolai. Now every year on Shrovetide in Nikola-Lenivets they build a sculpture and burn it, and this tradition began by chance. The Ziggurat, built in 2001, began to rot, and it was impossible to disassemble this giant haystack, so they decided to burn it. Then there was the «Media Tower”, which stood for two and a half years, aged and could eventually fall. «Basically, we got a beautiful recycling, a kind of performance: you invite people, and they watch the thing go away”» says Nikolai. So he suddenly came up with a show, which now attracts crowds of people in the spring. 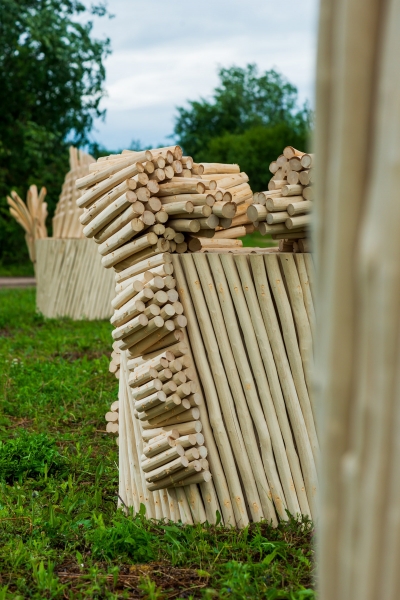 Fragments of columns for the exhibition «Russian Antiquity», 2021.

At the end of the conversation, I ask Nikolai Polissky a question about where and what he dreams of building, and he again answers philosophically: “There are very beautiful places where I would like to come up with something and do it. But if you set a goal, it will not come true, so I’m just waiting for the moment when I’m invited somewhere, and it will be another beautiful story in my collection. I always count on chance. I didn’t think that my columns would end up on Red Square, but I once tried to drag snowmen here.” «Ugruan», 2019. This is an allusion to the Rouen Cathedral, but it stands on the Ugra River. The first color structure in the portfolio of Nikolai Polissky.

Wellness with a secret garden in the Czech Republic