Daniil Nikishin and Mikhail Beilin from Citizenstudio and students of MARCHI and SPbGASU looked into the past to imagine what Moscow might look like if history had developed differently. 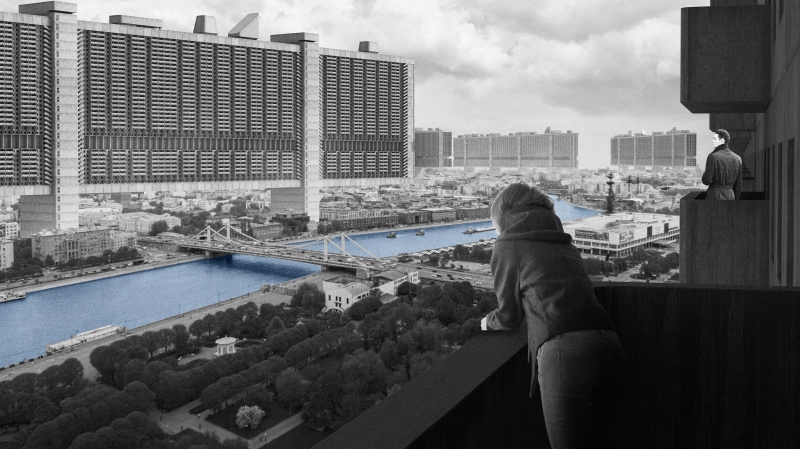 The sixth festival “Open City”, which is held on the initiative of the Moscow Architecture, has ended in Moscow. The theme of this year was «The Right to the City»: the study of the city as a space-time structure living in the process of a constant change of paradigms and technologies.

Within the framework of the festival, discussions and workshops were held, curated by the Institute of the General Plan of Moscow, the Gradplan of Moscow, as well as the architectural bureaus Kleinewelt Architekten, Citizenstudio, UNK project, Nowadays Office, Druzhba, YOarchitects, .ket, and the Workshop of Sergei Malakhov and Evgenia Repina. The project ”Archeology of the Future» was supervised by Daniil Nikishin and Mikhail Beilin from Citizenstudio, and its participants were students of MARCHI and SPbGASU. Together, they looked into the past to reflect on what the city might look like if history had developed in a different direction.

«Often, casting a fleeting glance at familiar landscapes, we ask the question“ «What if?..”What if Peter had not moved the capital to St. Petersburg? If there had not been a fire in Moscow? If the October Revolution had not happened and the city had formed into a bourgeois capital like Paris? If there had not been a sharp transition from constructivism to classicism and Empire style?» — says the curatorial manifesto.

This project is about the search for non-accidental images of Moscow. Starting from the moment of the demolition of the Kitaygorodsky wall, Elizabeth created three parallel realities.

“In the first case, the city tended to preserve buildings, nothing was demolished and nothing was built. Here, the layer of lost buildings is displayed to the greatest extent”» says Elizabeth. 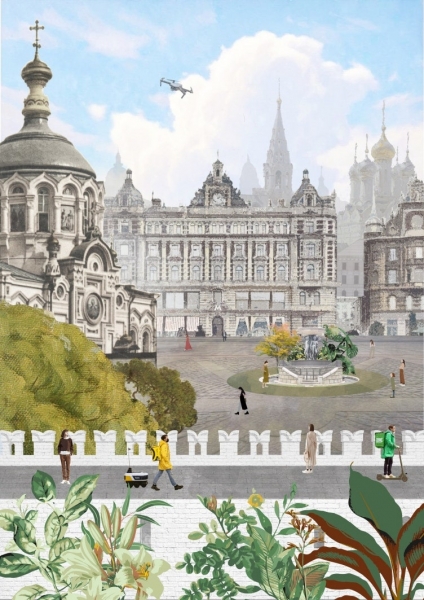 The second case tells about the «new city”, where the entire existing layer was demolished and a new one was erected. His image consists of unrealized projects of the first half of the XX century. 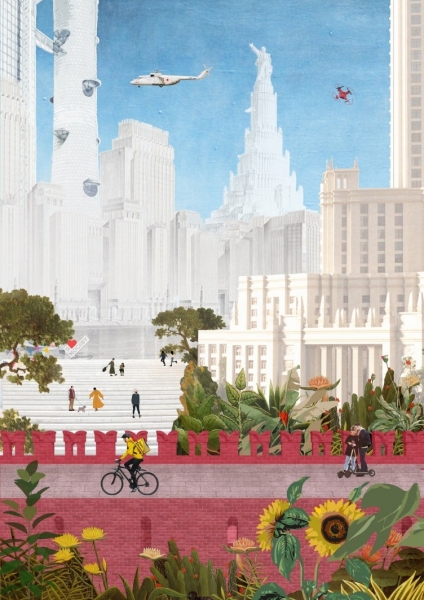 «The third story is about a city where everything is possible. It is characterized by a high degree of layering, since nothing has been completely lost in its structure and almost everything has been built”» 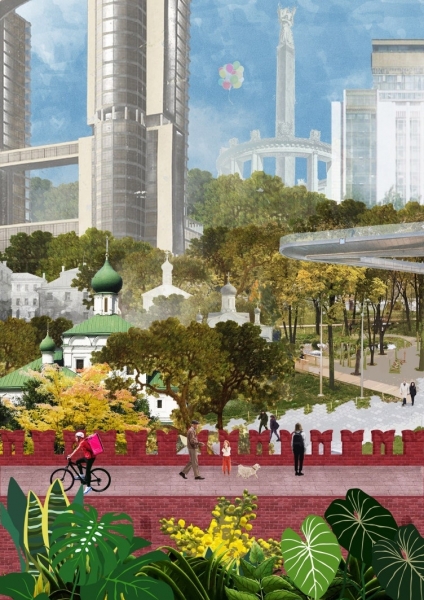 “We look at each image from today, so I added recognizable Moscow attributes. In this project, only the Kitaygorodsky Wall remains a constant, which was not demolished, but became used by the townspeople and runs like a red thread through the entire triptych”»

«Sometimes you wonder what my city would look like if the story developed according to a different scenario?”

“In one reality you see a dynamically developing city. Its axis looks to the northwest. Walking through the center, you meet the Kremlin and other historical monuments, but then the city develops rapidly. Large chunks of greenery break through the monotonous buildings, the river banks resemble gardens, and on the periphery of the city there is industry, forming the outline of a parabola with its contour. Industry, like a fortress wall, limits the city. Behind it there are only forests, fields and farms. But over time, the city grows, this clear boundary is erased. Housing gradually seeps into the monolithic forms of manufactories and takes them out of the city,» Elizabeth describes. 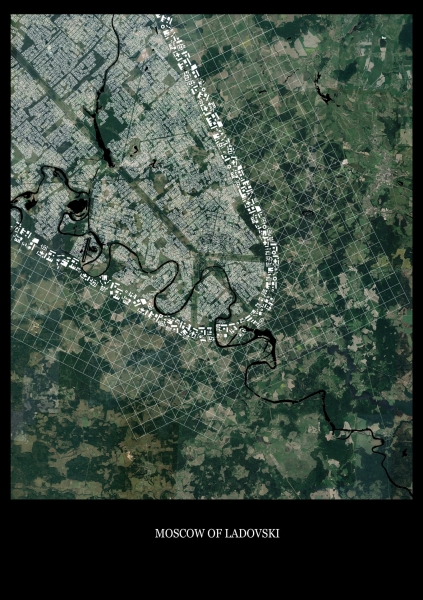 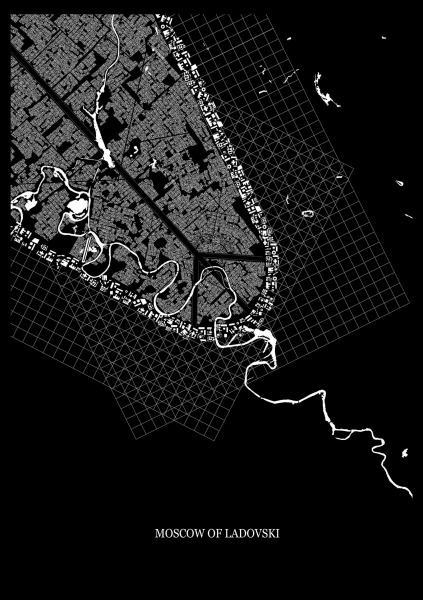 “In another reality, you have a clear structure in front of you. The city is compact and strictly divided by function. In the north there is a new administrative center, then, slightly to the south, there are residential areas, the historical center, and on the southernmost periphery — industry. The radical ring organization of the city goes away as an unnecessary medieval vestige. An orthogonal grid appears in its place. When you get to the center, you notice that everything, with the exception of the main historical monuments, is replaced by geometrically correctly built districts. The dominant buildings are cruciform high-rises of 50 floors. And between them are large green areas and a multi-level network of highways. The city is filled with greenery and surrounded by it. Is it a city in a garden or a garden in a city? 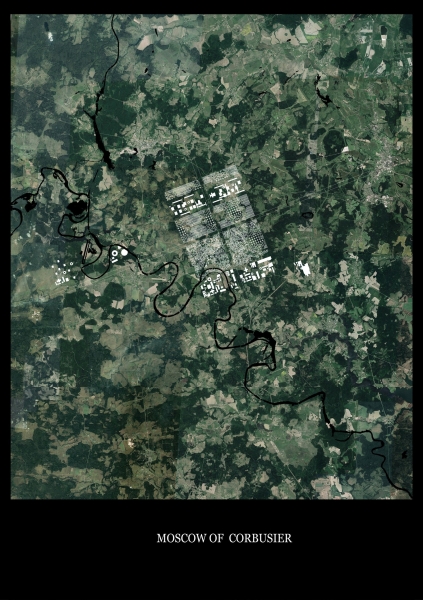 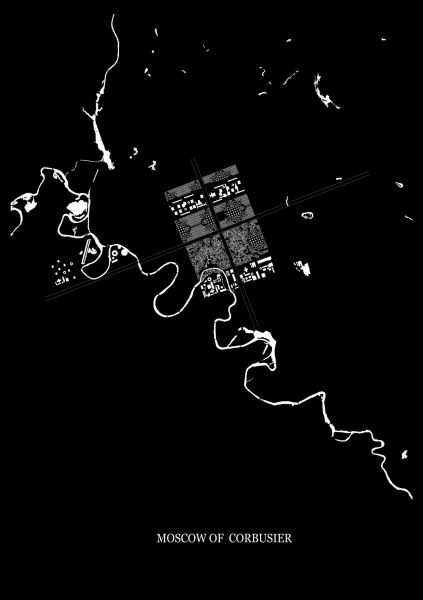 “In the third reality, you are no longer in Moscow, but 20 km away from it. In a small satellite town. There is a lot of life here. There are low-rise buildings with private plots around, and agricultural zones outside the town. And there are dozens of such towns, all at a distance from Moscow. The old historical Moscow has turned into an administrative and business center. People come here only to work and rule”» 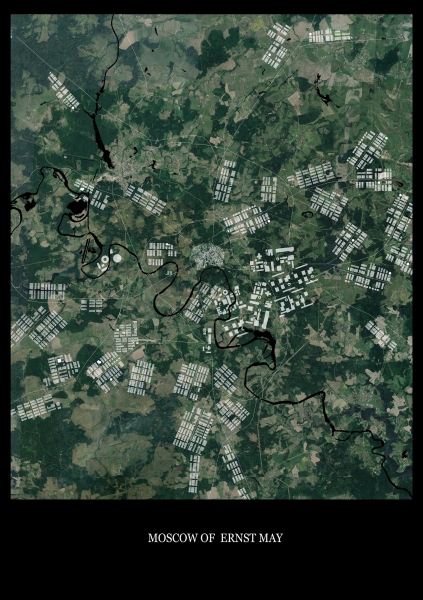 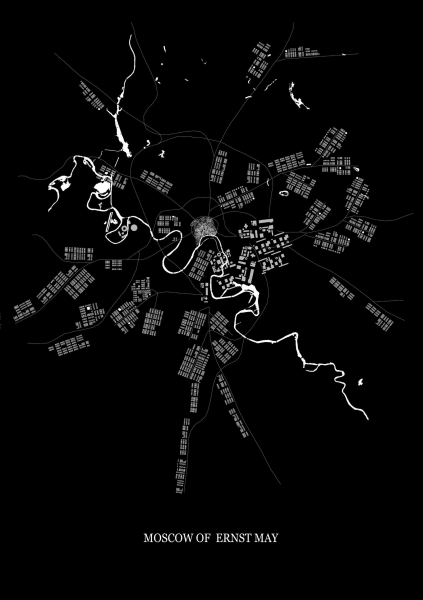 The City of victorious Modernism

«There is no Stalin. As a consequence, Stalinist architecture did not happen. Imagine a city in which the goal of architects is not the ceremonial design of the city, but the convenience of citizens in the machine era. Let’s imagine architects inspired by the ideas of the avant-garde of the 1920s and who met the era of post-war modernism. Let’s imagine a country that was overwhelmed by large-scale construction projects, and the capital was rebuilt in a new way”» 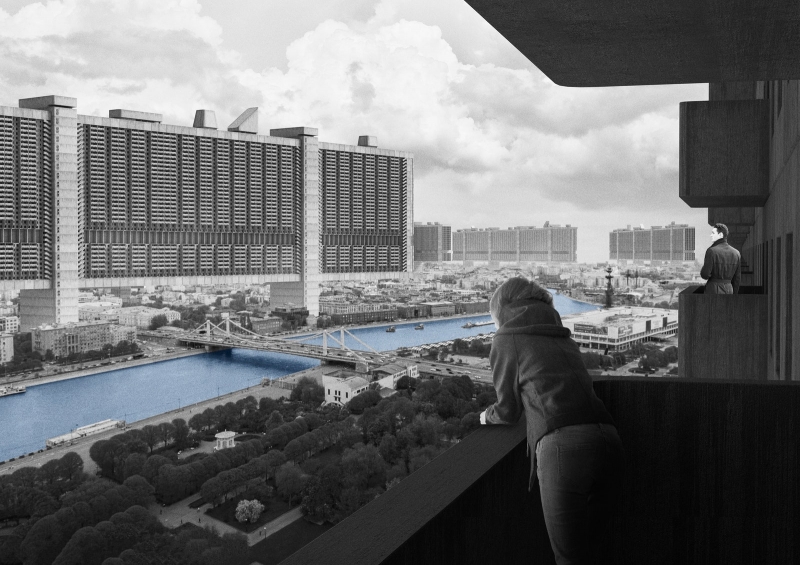 «The competition for the master plan would have been held earlier and combined the best ideas into one megaproject of the garden city. People’s lives have moved into giant houses hanging over the city. The power has moved to the megastructure of the authorship of Leonid Pavlov. The city was pierced by wide transport arteries. Parks and recreational areas were laid out between the superdoms, following the precepts of Le Corbusier. Architectural monuments and the Old Town were left behind.» 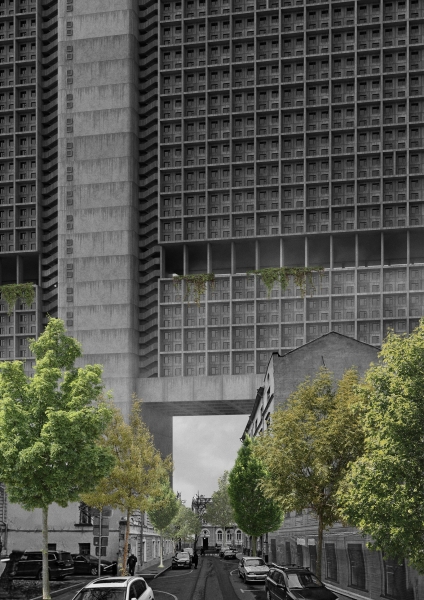 «Fortunately, such projects remained on paper, and in particular on my images. Of course, such small-scale buildings would create a lot of problems for both the city and the person. But for the history of architecture, these ideas are very valuable and vividly reflect the mood of the architects of that time — the belief in the limitless possibilities of man and a bright future”» 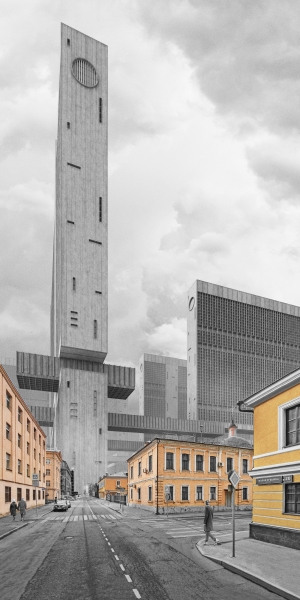 The Time of Troubles and the Renaissance

“From 1917 to 1960, 670 churches were closed in Moscow, 433 of them were destroyed. The remaining ones have been converted to the needs of the society: from warehouses and vegetable storages to apartment buildings. Using the example of the Cathedral of the Mother of God at the Kaluga Gate in Moscow, I tried to imagine a scenario in which, in the post-revolutionary period, churches were not demolished, but reconstructed”» 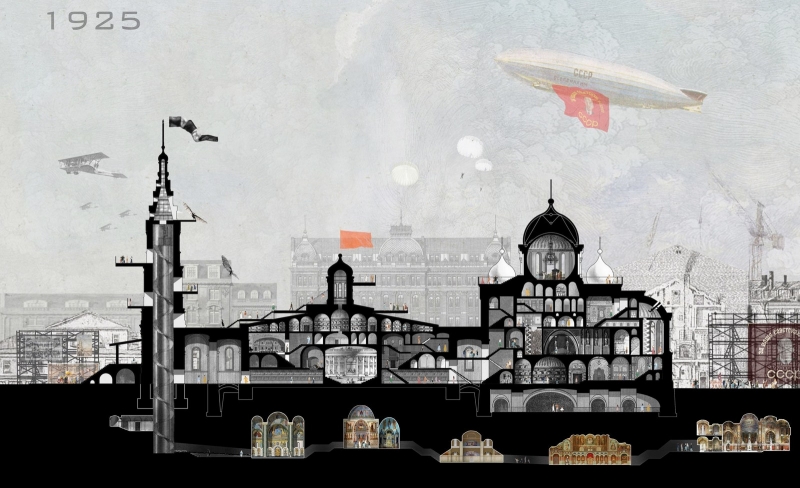 “In the first work, we can observe the cathedral during the NEP period. People are in a hurry to benefit the fatherland: a new model of aircraft is being tested in the sky; an airship with the image of the leader is sailing like a ship; there is a parade in honor of the main members of the party on the street, but the most interesting events unfold in the temple. A party meeting takes place under the dome itself, in the main hall of the premiere of the play, experiments of aircraft modeling are conducted in the bell tower. And only deep underground there is still spiritual life: there is a house church in which services are still going on.

In the second work, the temple shows in our time. Having overcome the troubled times, he appeared before us in his original form. Once again, these walls are filled with light and prayer of parishioners”» 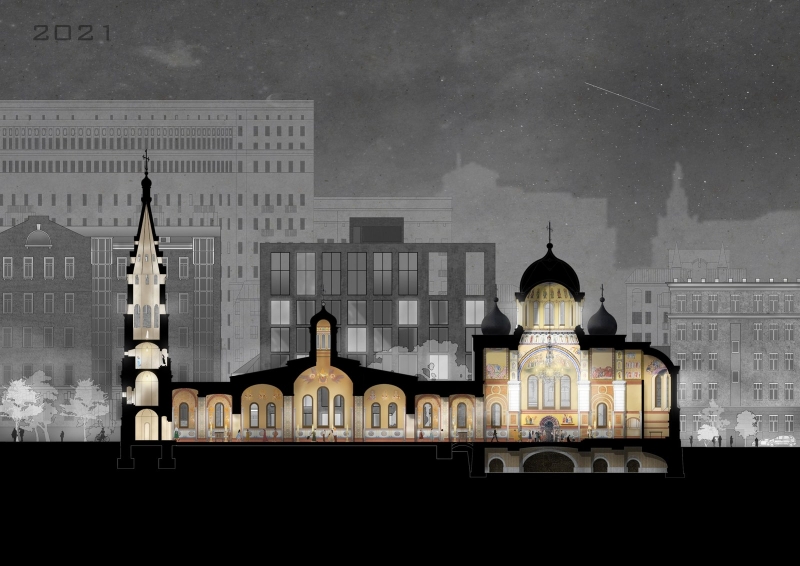 Any reconstruction is better than the complete loss of the object of cultural heritage, because in this case the temple is subject to restoration and can start functioning again after a while!