The city is a source of stress. Can this be changed? In search of an answer, Anastasia Romashkevich went to the studio of the architectural bureau Wowhaus. 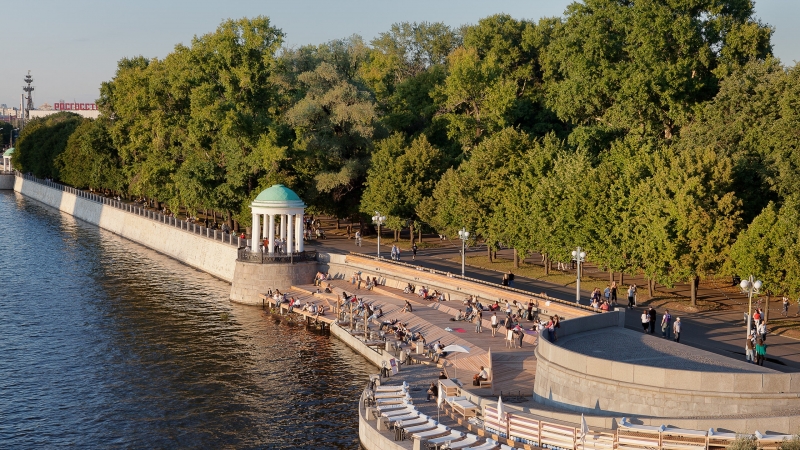 Behind the large windows of Oleg Shapiro’s office, trains flash by on Artplay. No houses, no people — just perpetual motion. You can imagine how the ideas born in this room will spread all over the country. Which is pretty close to the truth: Wowhaus conducts projects in Tula, Derbent, Tobolsk and even in Vladivostok with Sakhalin. 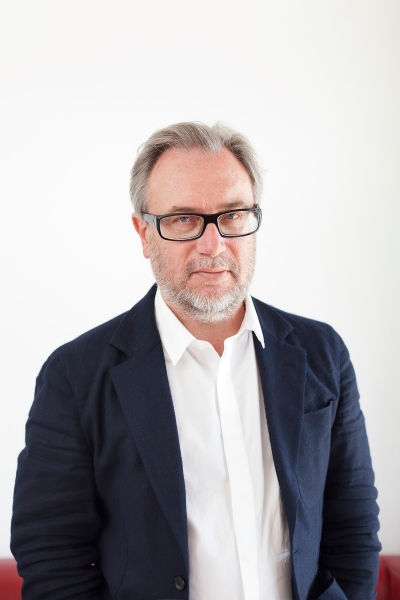 Oleg Shapiro and Dmitry Likin opened their bureau in 2007, and became famous a couple of years later ‑ in 2009 they designed the Strelka Institute and in 2011 they were engaged in the reconstruction of Gorky Park, which laid the ideological standards of modern landscaping. After this project, public spaces became the leitmotif of urban transformations that affect both the lifestyle of people and the economy. And now they are increasingly being talked about in the context of Urban Health — a healthy city and urban health. This led me to a meeting with Oleg: I wonder how to turn a city that is traditionally considered a focus of stress into a citadel of a healthy lifestyle.

Anastasia: Oleg, how do you feel about the urban health concept and what do you invest in it?

Oleg: People live in the city because it gives them the maximum number of opportunities — even if you don’t use them, it warms you that they are there. But you have to move around the city somehow. Previously — by public transport, then — by private car, and now it is considered that it is better to travel on foot or by bicycle. Therefore, for example, Paris officially announces that it is going to become a city of fifteen-minute accessibility. This means that in fifteen minutes you can get to any place that is necessary for life. In fact, this is the principle of Soviet urban planning, when you had a dairy kitchen, a kindergarten and a grocery store next to your house. However, there were no groceries in the grocery store. 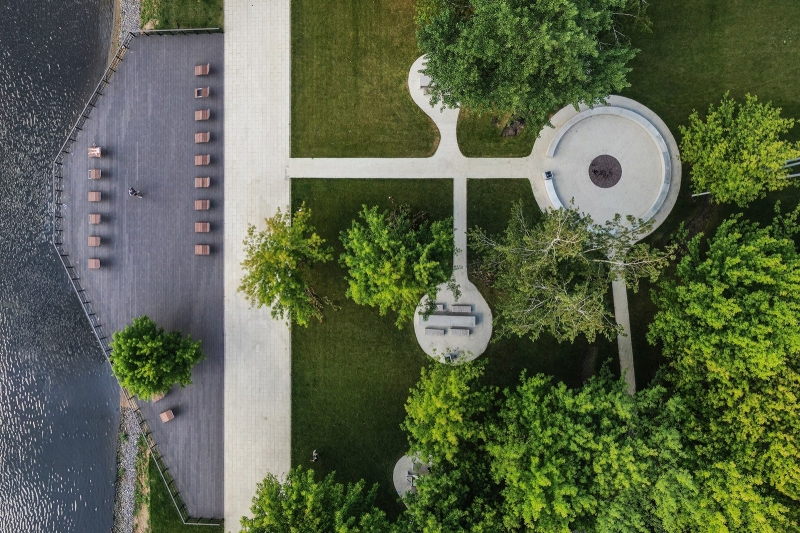 The park on the banks of the Moskva River in Kapotna was reconstructed according to the Wowhaus project as part of the improvement of the entire district in 2019-2020. View of the park from above.

And also there were no jobs in the Soviet districts, but a fifteen-minute city, as far as I understand, involves mixed construction, so as not to go to work through the whole city.

Yes, but only if it’s not a unique job. By the way, about uniqueness: we once investigated the second education in the South-Eastern district of Moscow. It turned out that 98% of parents choose an art or music school so that the child can get there quickly and safely as possible. And only when parents associate the future of the child with music, they look for a teacher and go to him — this is a unique story. Similarly, if you are a conductor at the Bolshoi Theater, you will have to go to the Bolshoi Theater. 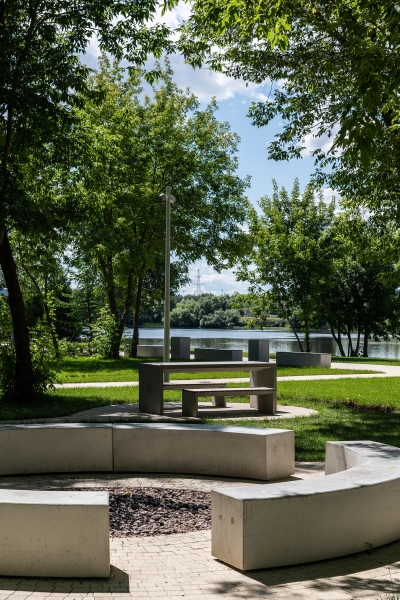 Equipped place for a bonfire, where locals, as before, can gather for a picnic. 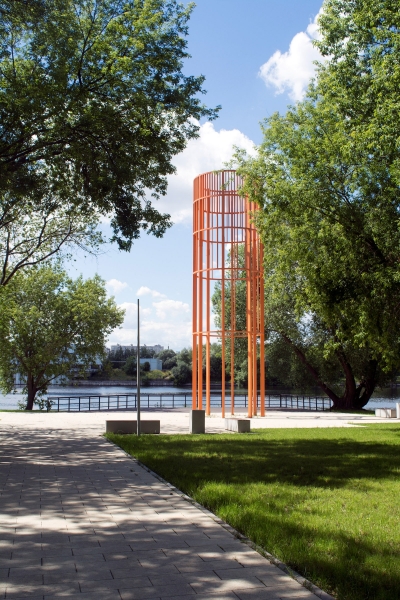 The symbolic center is the orange lighthouse on the embankment.

Or move closer to him — the conductor at the Bolshoi Theater can probably afford it. And what is the effect of a fifteen-minute city for health? Do people feel better because they walk a lot, or are they affected by something else?

My wife is a psychologist, and I believe that the root is in psychological health. It’s good for us if we don’t spend one and a half to two hours a day delivering ourselves to and from work, when we have a lot of free time, there is no fuss, calmness and inner comfort. You look — and we have already removed cardiovascular diseases. And then, fifteen-minute accessibility implies, for example, the proximity of parks and green areas, gyms, fitness. 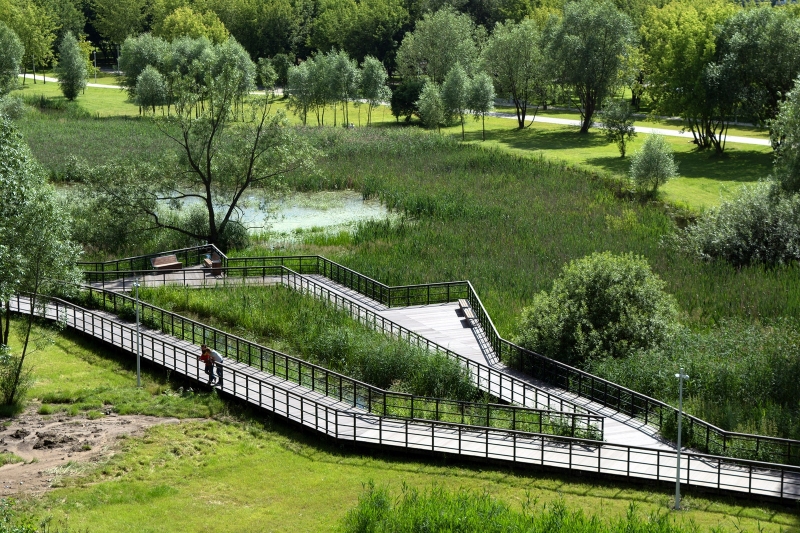 Ecotropes in the swampy part of the park.

But there is another question: is this concept realistic, or is a fifteen—minute city an ideal that everyone aspires to, but it is unclear whether it is achievable in principle?

This is a model of a multi-core city. This is how London was created: there is a city, then it absorbs the neighboring town, but it retains its center. Moscow developed in the same way, but after the next village became part of the city, it was completely cleared and rebuilt. Paris and Moscow are monocentric cities. Their radial system arose as a reflection of the political system — in France there was a super monarchy, and so do we. While the Polytechnic Museum is undergoing renovation, the Wowhaus-designed public space around it is already living its life. 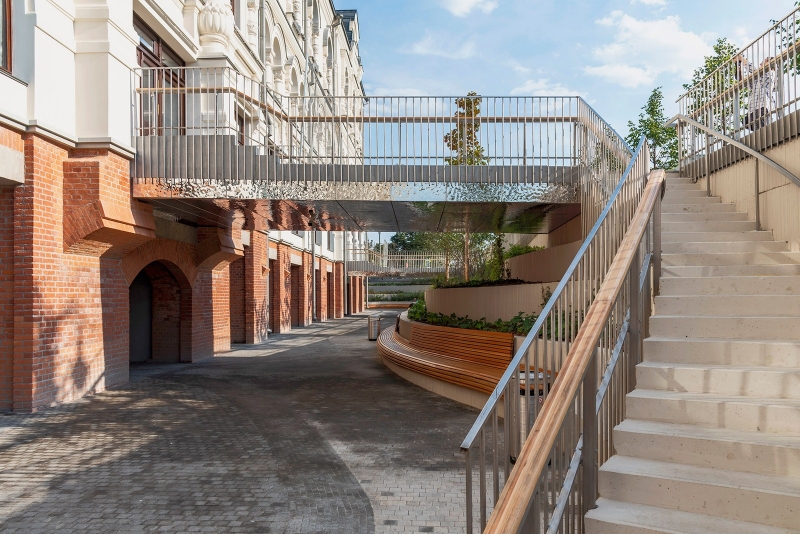 The Polytechnic Museum Park according to the Wowhaus project. 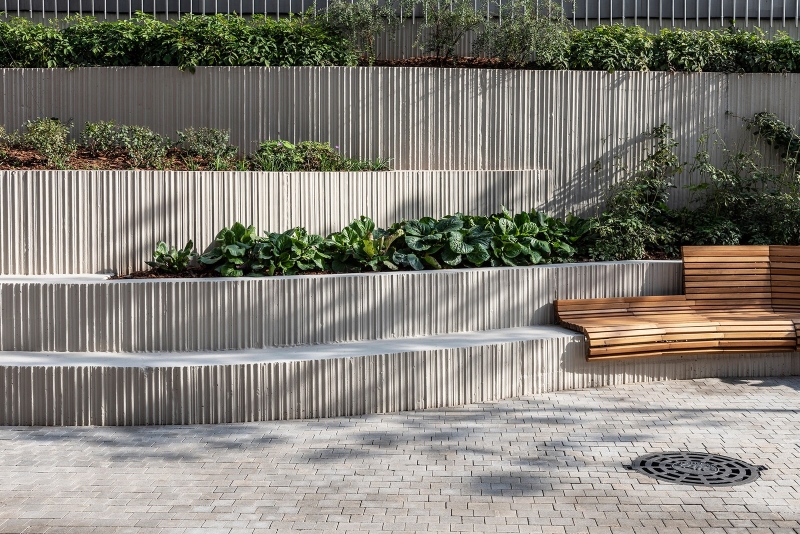 The Polytechnic Museum Park according to the Wowhaus project.

Before the pandemic, it seemed that the main evil was other people, they are the ones who create problems and stress for us. And then we sat locked up and saw that loneliness is much worse. Are public spaces where we meet other people, even strangers, important for mental health?

A city is a public space: a street, a park, a square. There are no factories in a modern city, its economy is services. And in order for the services to work, they must be filled with people. Therefore, the boom of public spaces is not only a social, hygienic or political issue, it is a normal economic process.

This is how cities live, this is how they earn. For better or worse, public spaces are inevitable. 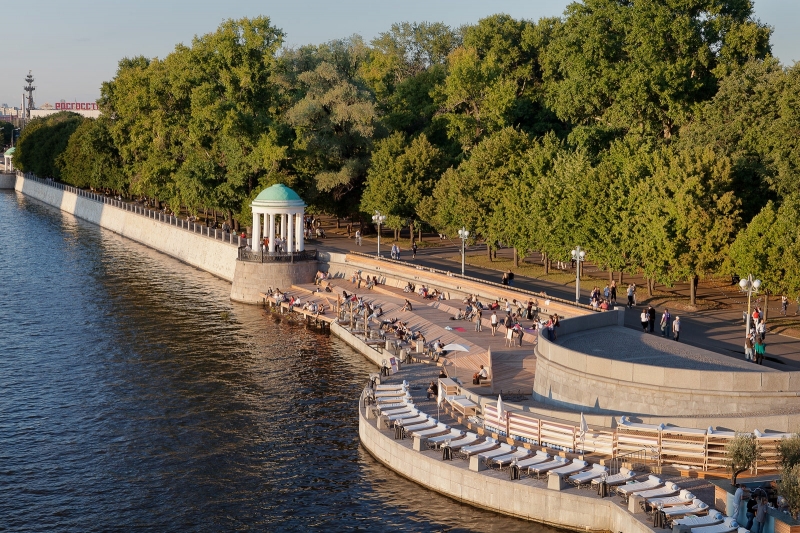 Olive Beach is one of the bureau’s early projects. It manifested itself in the early 2010s as part of the transformation of Gorky Park, initiated by the then head of the Moscow Department of Culture Sergei Kapkov. 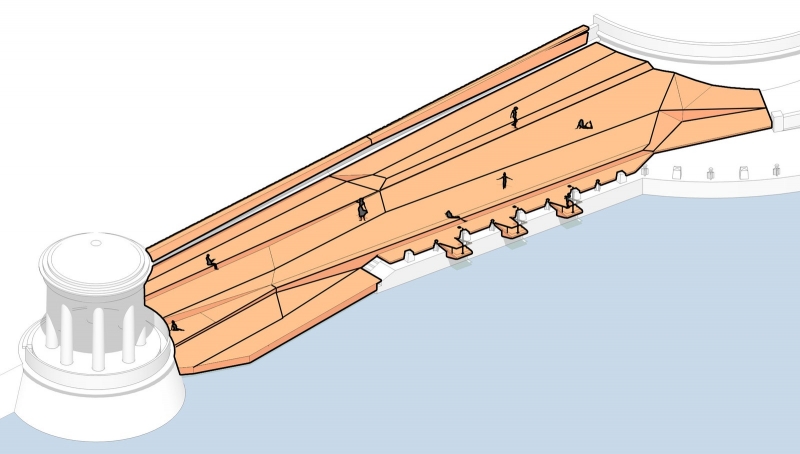 But life on the outskirts is arranged quite differently. What to do with our endless sleeping areas?

When we reconstruct the center, we follow the global trend — the central districts are more or less the same everywhere. But as soon as we enter a residential area where most people live, it becomes a serious challenge both in terms of the scale of the territory and the uniqueness of the tasks. In the modernist buildings of the 1960s and 1980s, there are no active ground floors for services, housing starts right from the ground, and the huge spaces between the houses are filled with cars. A similar situation was only in East Germany, where residential buildings were compacted with low-rise buildings with coffee shops, services, and community centers. This corresponds to the concept of a fifteen-minute city both in terms of the availability of services and in terms of the emergence of new jobs near home.

The city is a mystically stable organism. If people are used to going to the center, it is very difficult to deal with this. But it seems to me that the opportunity not to go to work is a great incentive for normal life to appear in residential areas. Now we can work at home, although not everyone likes it: someone has children, someone has little space, and in general — it’s also strange not to leave the house at all. People have a need to have a coworking, a sports club, a service center near their home. And then, you see, bakeries will appear. Now talk about compaction causes protest, but when the need arises, it will happen naturally. In addition, we have hypermarkets that, for obvious reasons, cease to survive. You can destroy them, but you can not destroy them — people are already used to going there, these are covered spaces, communications are connected there. And it seems to me that they can be taken as a basis: let there be sports centers, yoga, coworking, showrooms of the same stores. In 2019, Wowhaus received the AD Design Award for the reconstruction project of the Stanislavsky Electrotheater. 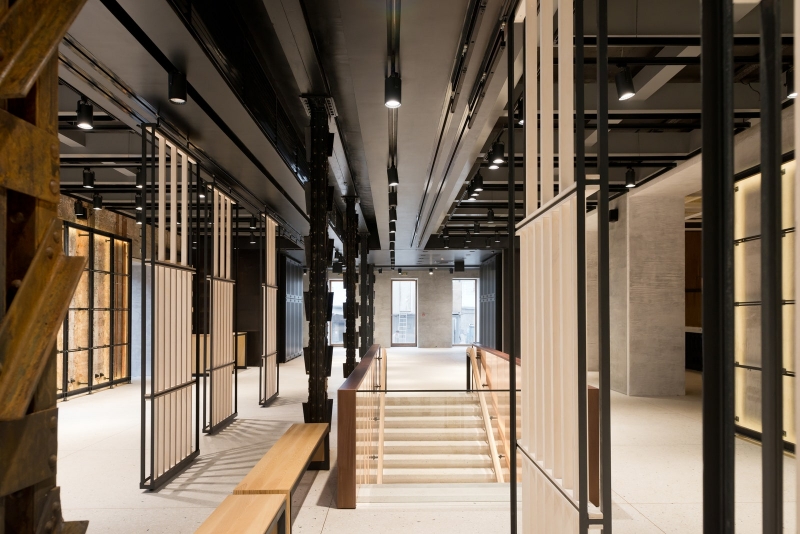 Reconstruction project of the Stanislavsky Electrotheater. Reconstruction project of the Stanislavsky Electrotheater.

Now there is a fashion for participatory design, when local residents discuss future landscaping together with architects. And the situation there is like in a war. If we go back to the issue of mental health, are such discussions going into negative territory? Or is it good that people let off steam?

Well, this is how they put bags to mutuzit them…

So you’re becoming a punching bag?

A little bit, yes. First of all, in Moscow. We are now making streets around the Patriarchs, including courtyards. At first there was a tough confrontation, but then there was the fastest possible consensus, because people knew exactly what they needed. The authorities are experimenting with discussing projects, without this it is already impossible, people will still discuss. The only question is whether publicly or not. It is very useful when the head of the council sits at such discussions, because nine-tenths of the questions that arise are related to what flooded there, fell off here, and so on. And when the head of the council writes down these questions, people have hope that all this will be repaired, and then the degree of emotion in the discussions decreases. 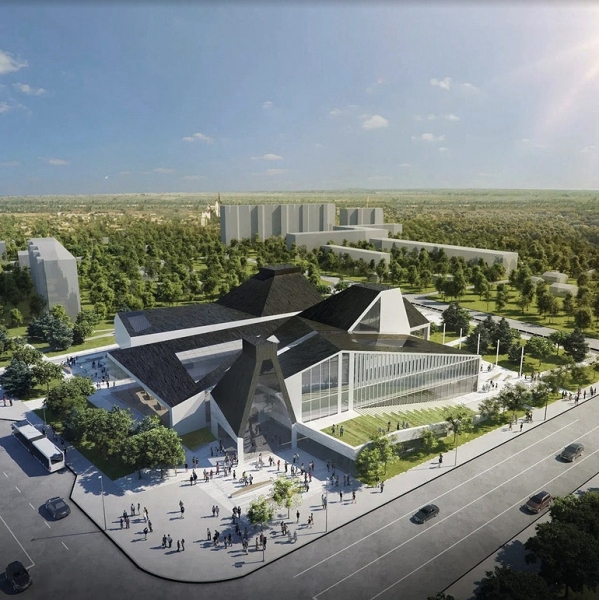 The project of the cultural center in Tobolsk.

Are people more sympathetic in other cities?

In other cities, they do not really believe, although they hope for changes. But there are always people who are skeptical. For example, discussions were quite active in Tula, because we blocked car traffic on Metallistov Street. But in general, we are for open discussions: even if they complicate the life of architects, but this is a fair necessity. Actually, at this moment, residents become citizens. The renovated Kazan Embankment in the center of Tula has launched changes that help the city retain young people and attract tourists from Moscow. 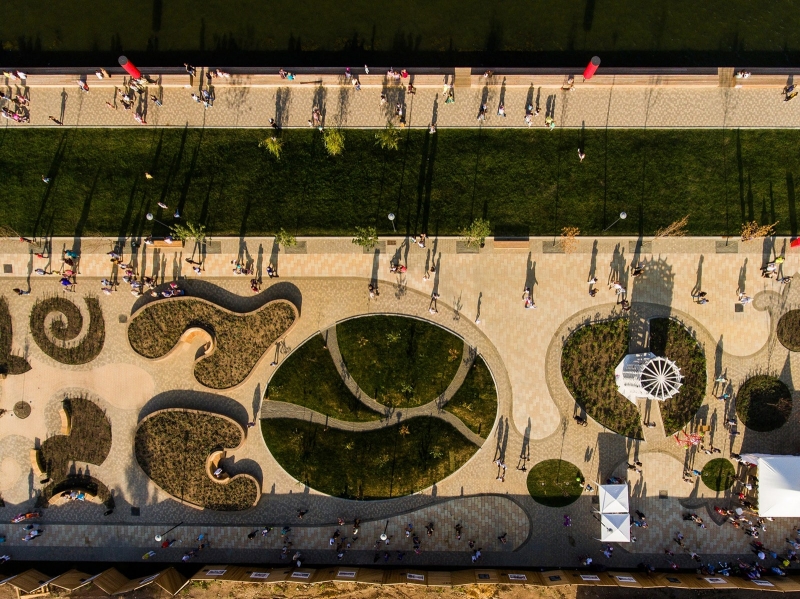 The renovated Kazan embankment in the center of Tula.

By the way, when I first saw the reconstruction of the embankment in Tula, there was nothing else there, Metallist Street was “dead”. And now there is a feeling that not only this territory has come to life, but everything around it.

We designed it as a single system, and the main thing is that about a third of the money is buried below, underground — all these beautiful houses, architectural monuments, are dilapidated, but we brought water, electricity, sewerage there. Each house was sold to a specific person at auction. This is an ideal scheme: the state has created business opportunities, and business has restored everything at its own expense — several hotels and countless restaurants have now opened on Metallists. Then people began to buy the yards on the other side of the street — look, everything is amazingly done there. This is how a comfortable environment changes the life of the city. Moscow is a curse for any cities, people leave them. But today Moscow is a source of profit for Tula: it has become impossible to book a hotel there because of Moscow tourists. And then an interesting thing happens: it turns out that you don’t have to move, you can work in Moscow, and live in your hometown — you have an environment, there are places to go, there are theaters. They are still sleeping a little, but if there is a consumer, there will be theaters. 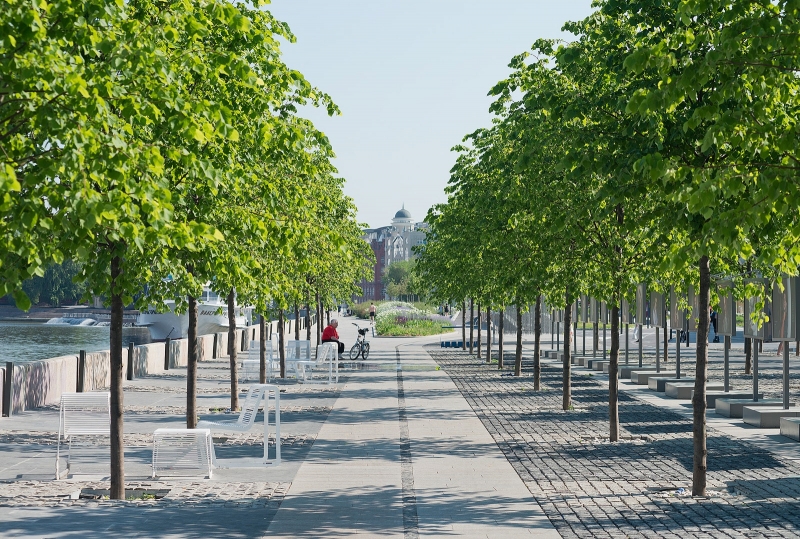 The Crimean embankment became pedestrian in 2013. Wowhaus architects have created a public space on the site of a former motorway. 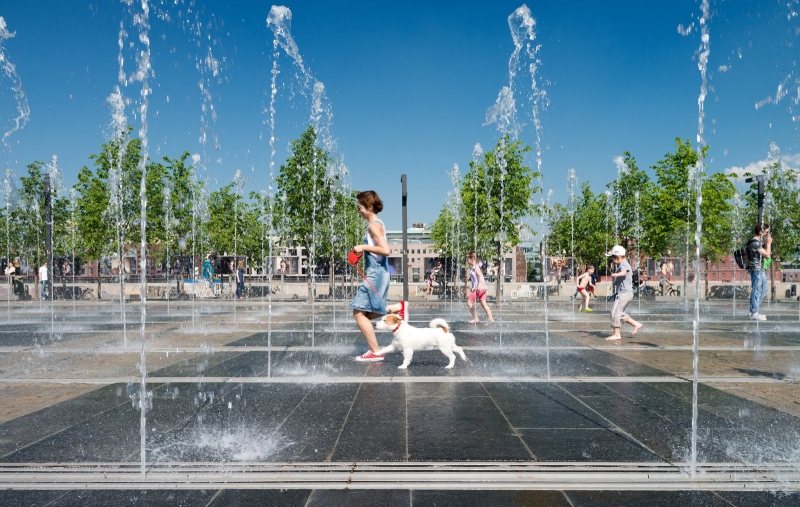 A new course on the preservation of architecture “Save and adapt: how to work with historical heritage?” within the framework of the program “Architects.rf”